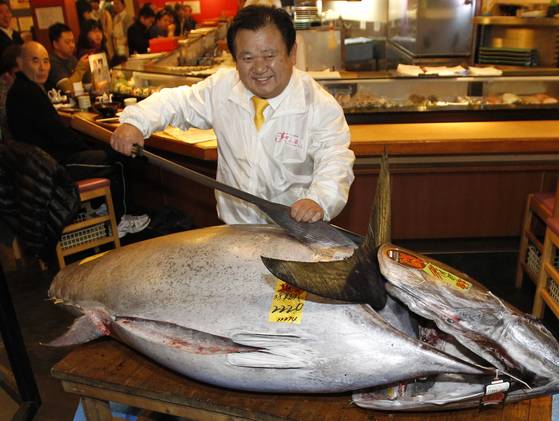 The fish's tender pink and red meat is prized for sushi and sashimi, but bluefin tuna stocks have fallen globally over the past 15 years amid overfishing.

The winning bidder, Kiyoshi Kimura, president of Kiyomura Co., which operates the Sushi-Zanmai restaurant chain, said "the price was a bit high," but that he wanted to "give Japan a boost," according to Kyodo News agency. He was planning to serve the fish to customers later Saturday.

Kimura also set the old record of 56.4 million yen at last year's New Year's auction, which tends to attract high bids as a celebratory way to kick off the new year — or get some publicity. The high prices don't necessarily reflect exceptionally high fish quality.

The best slices of fatty bluefin — called "o-toro" here — can sell for $24 per piece at tony Tokyo sushi bars.

Japanese eat 80% of the Atlantic and Pacific Bluefin tuna caught, and much of the species caught worldwide is shipped to Japan for consumption. A 2010 stock assessment of the Pacific Bluefin indicated a declining population.

Stocks of bluefin caught in the Atlantic and Mediterranean plunged by 60% between 1997 and 2007 due to rampant, often illegal, overfishing and lax quotas. Although there has been some improvement in recent years, experts say the outlook for the species is still fragile.

In November, the 48 member nations of the International Commission for the Conservation of Atlantic Tunas, or ICCAT, voted to maintain strict catch limits on the species, although some countries argued for higher limits. The quota will be allowed to rise slightly from 12,900 metric tons a year to 13,500. Quotas were as high as 32,000 tons in 2006.

Copyright 2012 The Associated Press. All rights reserved. This material may not be published, broadcast, rewritten or redistributed.