I sat in a bunker hoping the incoming rocket did not have my name on it. I was a young CIA officer, called by September 11 to serve, and found myself amid generals and sheikhs, writing for presidents—the life I'd dreamed of since childhood. Drained by 18-hour days and fitful sleep, my demons flooded the moments of peace. In the dark, I heard fighting beyond the wall, thought of friends killed and wounded, and remembered my secret. 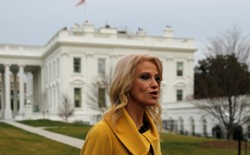 The Unsung Architect of Trumpism

You feel explosions before you hear them, and there was a bomb at the center of my life that no one could see. I was transgender, and feared I would lose my family and friendships. It was before an Executive Order protected transgender employees, and I imagined myself ridiculed or fired if I admitted the truth. I had heard a story about what happened to one CIA officer who had taken that step:

"Once upon a time, an officer with decades of experience lost it; clearly the stress. One day he decided he was now a woman—hilarious I know—and wanted everyone to believe him. Management didn't know what to do with the transsexual. CIA had only just accepted gays; the officer left the Agency."

When I was a child I knew that trans-people existed, but I knew I couldn't possibly be one of them. I was going to make history, not be some freak on television. My self-discipline and self-hatred marched in lock-step.

I bottled up my problem, and tried to live up to the CIA's values: to "put mission before self" and "go where others cannot." But CIA has other chiseled words: "the truth shall set you free." How could I speak truth to power but not be honest with myself?

Sinking into depression, I built a double life; living as a woman outside work and changing genders in Langley's unisex restrooms. My juggling act faltered at a staff meeting when a friend whispered that I had forgotten to remove my mascara.

The trans-community has a joke: "What's the difference between a crossdresser and someone who changes genders? Two years." The punchline ignores the trans-people who never transition or find happiness outside the gender binary. But for me, my hours as Jenny lifted a terrible sadness in my life.

If you found out you needed glasses, and discovered that the world is filled with beauty and color that you thought was just a blur, why would you ever take them off?

I finally reached the breaking point. I was failing at my job and found myself crying in the bathroom. I walked into my boss's office and closed the door. She later told me she was relieved when I told her. From the look on my face, she thought I had cancer.

I have been to war and changed genders, I don't fear the next mission.

Much had changed in the years since the last transgender officer came out. When my boss gathered my co-workers to tell them that I was transitioning, one of the millennials remarked: "Good for her. Can we get back to work now?" Meanwhile, after stalling in the parking lot for an hour, I badged in to discover that my colleagues had bought me a gift card to a women's clothing store. A friend deadpanned, "Jenny, nobody liked you as a guy anyway."

The most terrifying day of my life turned out to be a non-event, but it was another step in pushing the Agency out of the closet. For 40 years, the CIA had fired gay and lesbian officers for being themselves; an injustice and senseless waste of America's silent defenders. By contrast, today's CIA embraced my transition. Colleagues shared stories of LGBT loved ones, and other transgender officers started to come out. Director John Brennan began wearing a rainbow lanyard, and a CIA booth stands at D.C.'s annual Gay Pride Festival.

That progress is long overdue. One study estimates approximately 134,000 transgender veterans have served in our military, and over 15,000 currently serve in our armed forces. When I walk the rows at Arlington, I can't help but dwell on the closeted soldiers of past generations.

Jenny Hall is not my real name. Jenny was our pet dachshund, and Virginia Hall was a one-legged OSS hero who ran spies under the nose of the Nazis. Overlooked by male colleagues, the Gestapo called her "the Limping Lady…the most dangerous of Allied spies." I relish the idea that I'm ISIS's nightmare: trans, gay, Jewish, CIA, and worst of all, female.

It turns out that starting over as a transwoman is not all sequins and makeup. I joked that there should be night classes to prepare for the realities of working while female: toiling harder for less recognition, being interrupted by men who think they're giving a TED talk. I knew I'd "arrived" as a woman when someone made a sexist joke about my driving.

My life as a trans CIA officer has made me privy to state secrets: Women pay more for dry cleaning. Chocolate is amazing on estrogen. My email is filled with yogurt ads and warnings that my fertility window is closing.

One last reveal: No one cares that I'm trans. Defecting from Brooks Brothers to Ann Taylor had no impact on my ability to update the president on events overseas. In fact, without the fear of losing my clearance or exhaustion from pretending to be male, I became a better intelligence officer.

Migrating from man to woman, I learned the social codes of both camps, and was forced to confront my own prejudices and assumptions. Indeed, self-awareness, humility, and the courage to speak unpopular truths are core principles of intelligence tradecraft. I have been to war and changed genders; I don't fear the next mission.

Active-duty CIA officers do not talk about their work in the papers, and my friends would tell you that being trans is the least interesting thing about me. I've had a marvelous career in the years since I transitioned, seeing the world, and doing the work I love. But when my past starts fading into memory, I'm jolted by reminders that our country has a long way to go.

The support I received from CIA draws a damning contrast to the treatment of other transgender Americans. If trans soldiers can serve in Afghanistan and Iraq, and LGBT intelligence officers can risk their lives hunting terrorists, why are trans teens like Gavin Grimm still fighting in court for the right to pee? If Langley and the Pentagon can use common sense—letting transmen use the men's room and transwomen the ladies'—surely a school district can figure it out.

As I child, I internalized these messages of hate. I learned to never tell a soul and bottle up the pain until it became unbearable. As this country becomes more inclusive, trans kids are coming out earlier in life, and avoiding decades of denial and suffering. This generation deserves to grow up without stigma, and become the future doctors, engineers, and artists who make America the envy of the world. And trans kids should know, CIA is always recruiting.