Wild Cow, a vegetarian restaurant in Nashville, had an advertisement for a show benefiting a dog rescue flagged as political content.CreditLauren Yakiwchuk

What do a day care center, a vegetarian restaurant, a hair salon, an outdoor clothing maker and an investigative news publisher have in common?

Facing a torrent of criticism over its failure to prevent foreign interference during the 2016 election, the giant social network recently adopted new rules to make its advertising service harder to exploit.

Under the new rules, advertisers who want to buy political ads in the United States must first prove that they live in the country, and mark their ads with a "paid for by" disclaimer. Any ad Facebook deems to contain political content is stored in a searchable public database.

The new rules are meant to illuminate the sometimes shadowy world of politics on social media and help prevent fraud and abuse by organizations like Russia's Internet Research Agency. But many advertisers, including small businesses and news organizations, are complaining that Facebook's detection system has mistakenly miscategorized their ads as political. All ads that have political content — including the miscategorized ones and ads that are taken down after running — are included in the public database.

Michelle Benson, who runs a children's day care center in Shirley, N.Y., tried to spend $100 to circulate an ad on Wednesday. The ad said that she had openings for more children this summer. "I will beat anyone's rates and accommodate parents according to their schedule," it read.

The ad contained no reference to any political candidate or issue. But Ms. Benson received a notification from Facebook that her ad had been rejected because she was not "authorized to run ads with political content." 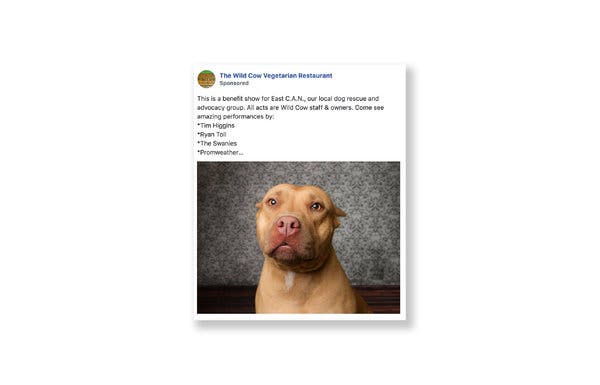 The Wild Cow ad that was taken down by Facebook. "I assumed it had to do with the picture," said Melanie Cochran, the restaurant's co-owner.

A similar thing happened to Jamila Zaidi, who manages a hair salon in Frederick, Md. Ms. Zaidi was surprised when her Facebook ad for a store special — "$100 for a full highlight or color service for all new clients!" — was deemed an unlabeled political ad.

The Wild Cow, a vegetarian restaurant in Nashville, felt the effects of the new policy as well, when Facebook took down an ad for a fund-raising show the restaurant was hosting for a local dog rescue group. The ad included information about the show along with a photo of a handsome pit bull.

"I was wondering why that didn't get approved," Melanie Cochran, the Wild Cow's co-owner, said when a reporter told her that the ad had appeared in Facebook's political ad archive. "I assumed it had to do with the picture."

Rob Leathern, Facebook's director of product management, said that in all three of these cases, the company's review process had simply not worked as intended.

"These ads were mistakenly marked as political, and those decisions have been overturned," Mr. Leathern said. "These are new policies, and it's not going to be perfect at the start."

He added, "We think it's better than doing nothing at all."

The flagged ads were not part of large or lucrative campaigns, but they illustrate a growing problem for Facebook, which has said it is trying to safeguard elections around the world while not disturbing its hugely profitable advertising business, which generated $40 billion in revenue last year.

Michelle Benson was told the ad for her day care center was rejected because her page was not "authorized to run ads with political content."

Facebook's new review system uses a combination of artificial intelligence and human reviewers to determine if an ad is political in nature. The company said it looks at text and images in the post itself, as well as the ad's target audience and other attributes, to make a determination.

Ads flagged as political are kept offline until the advertiser goes through the verification process, which can take several days. It requires the advertiser to submit a photo identification, the last four digits of their Social Security number, and a code that is sent to them in the mail.

"We believe that these tools, which make our mistakes very visible, are working," Mr. Leathern said.

Facebook's advertising business is still largely automated. But after the 2016 election, the company pledged to more carefully monitor the ads in its system. It has hired additional moderators to manually screen political ads, and is devoting so many resources to the effort that Mark Zuckerberg, Facebook's chief executive, has said that he expected to lose money on political advertising during this campaign cycle.

But the social network's new system also appears to be allowing clearly partisan content to slip through. In a Democratic primary race this month in California's Fourth Congressional District, Facebook allowed a progressive advocacy group, Sierra Nevada Revolution, to run negative ads against one candidate, Regina Bateson. Despite their endorsement of Ms. Bateson's rival, the ads were not flagged as political.

The new ad policies have been especially contentious within the news industry. Facebook has angered publishers by classifying some opinion columns and news articles — including some about issues like immigration — as political content. When publishers pay to boost the visibility of those columns and articles on Facebook, they have been held to the same standards as campaign ads and other partisan posts.

Last week, Mark Thompson, the chief executive of The New York Times Company, accused Facebook of "supporting the enemies of quality journalism" by sometimes labeling news as political content. And on Wednesday, Reveal, a nonprofit investigative journalism organization, complained about Facebook's decision to reject an ad for a story it had published about the treatment of children in immigrant detention centers.

Rob Goldman, Facebook's vice president of ads, wrote on Twitter that the company was trying to prevent the disguising of partisan content as legitimate news. He also said that publishers could continue to promote their stories with Facebook ads as long as they go through the authentication process.

"News and advocacy are different, and we'll be showing them separately in the transparency archive — but we flag both to prevent workarounds for bad actors," Mr. Goldman wrote.

Some advertisers are being more patient, perhaps seeing a glitchy advertising filter as better than none at all.

"While Facebook has more work to do to improve transparency among its users and advertisers, we applaud the steps the company is taking to prevent Russian bots from running and ruining our democracy," Mr. Carrington said.