“One of New York’s most spectacular architectural experiences,” Paul Goldberger, then the architecture critic of The New York Times, wrote in 1973 about the atrium of the new Elmer Holmes Bobst Library at New York University. It was that, indeed.

It also proved to be one of the most unnerving. The thin aluminum balusters ringing the balconies of the 12-story structure seemed disquietingly insubstantial against the 150-foot-high void beyond. When seen from above, the trompe-l’oeil floor looked like a three-dimensional fantasy landscape by M. C. Escher that almost beckoned the viewer to enter. A journey through Bobst could feel precarious even on the best day.

And there were three dreadful days. On Sept. 12, 2003, John D. Skolnik, a junior, jumped to his death in the atrium. Less than a month later, on Oct. 10, so did Stephen Bohler, a freshman. Within weeks, the university installed eight-foot-high clear polycarbonate barriers along the balconies. Despite this measure, on Nov. 3, 2009, Andrew E. Williamson-Noble, a junior, also jumped to his death there.

One step the university took in response to these and other student deaths was to commission Joel Sanders Architect to reimagine the troublesome space in Bobst. Instead of trying to create an inconspicuous barrier, Mr. Sanders and his colleagues have designed randomly perforated aluminum screens that completely enclose the balconies around the perimeter of the atrium and the open staircase connecting them, transforming the space in consequence. University officials expect the renovation to be finished next month. They would not disclose the cost. 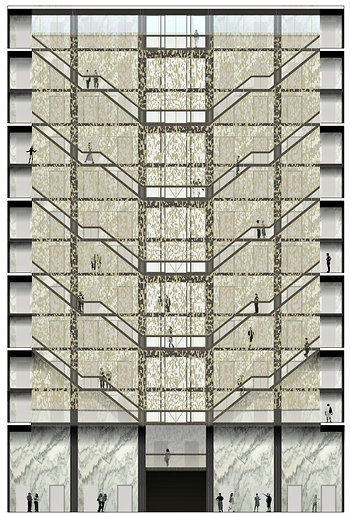 Joel Sanders ArchitectAbove: Cross-section of the atrium shows the placement of the screens on the central staircase. Below: The staircase in 2003. 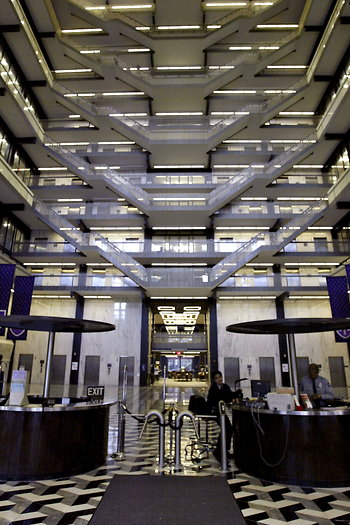 Though the panels visually isolate the enormous central volume from the surrounding stacks, reading rooms and offices, they can — in the right light — look as gauzy as theatrical scrims. They can also look like showers of gold confetti, in keeping with the late-’60s aesthetic of the building, which was designed by Philip Johnson and Richard T. Foster. But the screens are most intended to remind you of digital pixels.

“The whole idea was to come up with something sympathetic to the Philip Johnson design while being in and of today,” said Andrew T. Repoli, a director of construction management at New York University. “We didn’t want something that would have been hip 40 years ago.”

The 20-foot-tall panels weigh only about 150 pounds each, answering the university’s requirement that the barriers not place structural stress on the cantilevered balconies. The barriers also had to be transparent enough to allow daylight into the atrium and permeable enough to permit ventilation and, in emergencies, smoke purging.

The pattern extends the line of the balusters vertically with slender tines, four inches apart. Between the tines are solid rectangles or open rectangles. The proportion of open rectangles is greatest on the north side of the atrium, where daylight comes in through exterior windows overlooking Washington Square.

The composition around the atrium appears entirely random, but there are actually only 39 different patterns among the 286 panels.

SHoP Construction Services assisted in the design and engineering, Mr. Repoli said. Three-dimensional rendering software by Catia made it possible for the panel fabricators (MG McGrath of Maplewood, Minn.) to use the computer files created by the designers to cut openings in the quarter-inch aluminum.

At the moment, much of the work is hard to see. Among facets that critics may seize upon — and, this being N.Y.U., there will certainly be critics — is that the screens express technology’s new primacy, all but obscuring traditional forms of scholarship behind a cascade of random data. Critics may also discern a feeling of defeat in having to undertake such a fundamental alteration in the hope of saving students’ lives.

But in Mr. Repoli’s eyes, the architectural intervention is appropriately minimal. “You really don’t lose the visual qualities of the original atrium,” he said. “This is almost like a beautiful piece of lace that’s been stretched taut against the balcony slabs.” 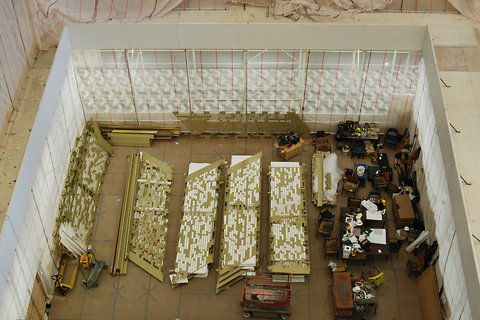