The American businessman, who lives in Singapore, took advantage of an unusual opening in an administration where matters of policy and business often seem to blur.

By Mark Mazzetti and Mark Landler

WASHINGTON — An American financier approached the Trump administration last summer with an unusual proposition: The North Korean government wanted to talk to Jared Kushner, the president's son-in-law and senior adviser.

The financier, Gabriel Schulze, explained that a top North Korean official was seeking a back channel to explore a meeting between President Trump and Kim Jong-un, who for months had traded threats of military confrontation. Mr. Schulze, who lives in Singapore, had built a network of contacts in North Korea on trips he had taken to develop business opportunities in the isolated state.

For some in North Korea, which has been ruled since its founding by a family dynasty, Mr. Kushner appeared to be a promising contact. As a member of the president's family, officials in Pyongyang judged, Mr. Kushner would have the ear of his father-in-law and be immune from the personnel changes that had convulsed the early months of the administration.

Mr. Schulze's quiet outreach was but one step in a circuitous path that led to last week's handshake between Mr. Trump and Mr. Kim at a colonial-style island hotel in Singapore — a path that involved secret meetings among spies, discussions between profit-minded entrepreneurs, and a previously unreported role for Mr. Kushner, according to interviews with current and former American officials and others familiar with the negotiations.

In reaching out to Mr. Kushner, the North Koreans were following the example of the Chinese, who had early on identified the 37-year-old husband of Ivanka Trump as a well-connected "princeling," someone who could be a conduit to Mr. Trump and allow them to bypass the bureaucracy of the State Department.

And in reaching out to the White House, Mr. Schulze was taking advantage of an unusual opening in an administration where matters of policy and business often seem to blur. The overture by Mr. Schulze, who had first met Trump family members several years ago when they were exploring business deals in Asia, came during a period of sharp division inside the administration over how to deal with North Korea's growing nuclear arsenal, with some officials even advocating a pre-emptive military strike. 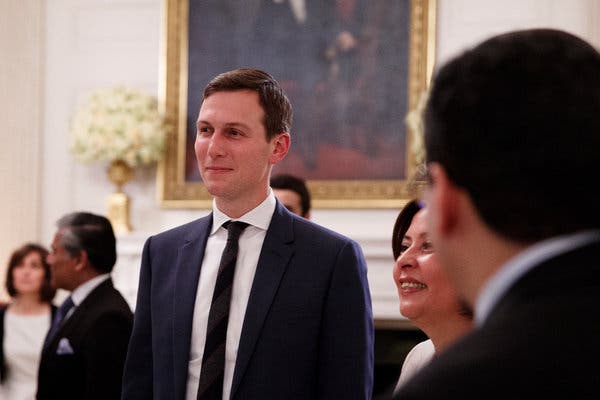 In reaching out to Jared Kushner, the North Koreans were following the example of the Chinese, who had early on identified the 37-year-old husband of Ivanka Trump as a well-connected "princeling."CreditTom Brenner/The New York Times

Mr. Kushner did not play a direct role in back-channel negotiations with North Korean officials, according to people familiar with the matter. He instead notified Mike Pompeo, the C.I.A. director at the time, about Mr. Schulze's outreach and requested that the agency be in charge of the discussions.

It is unclear why Mr. Kushner thought the C.I.A. — rather than the State Department — should take the lead, though he had an antagonistic relationship with Rex W. Tillerson, who was the secretary of state at the time, and a good rapport with Mr. Pompeo. It is also unclear whether Mr. Kushner's lack of a permanent top-secret security clearance at the time was a factor in his decision not to have a direct role.

For Mr. Schulze, the scion of a family that made billions in mining, a thaw in America's relationship with North Korea would be potentially lucrative. His firm, SGI Frontier Capital, adopts a high-risk strategy of investing in so-called frontier markets — Ethiopia, Mongolia and elsewhere. He did a number of small deals in North Korea before the Obama administration imposed new economic sanctions in 2016.

"I really believe that opportunity is found on the edge of our comfort zone," he told The Financial Times in 2013.

In a statement, Mr. Schulze said, "I do not discuss the nature of my business or personal relationships."

The meetings between Mr. Kushner and Mr. Schulze briefly injected the president's son-in-law into an issue in which he has otherwise had little involvement. But it was not the first time that Mr. Kushner became involved in a back channel on a delicate matter of national security.

Early in 2017, he opened a private channel to China's ambassador to Washington, Cui Tiankai, to try to settle Mr. Trump's relations with the Chinese government, which had gotten off to a bumpy start after Mr. Trump spoke with Taiwan's president. Mr. Kushner and Mr. Cui choreographed a two-day meeting that April, in which Mr. Trump played host to the Chinese leader, Xi Jinping, at Mar-a-Lago, his estate in Palm Beach, Fla.

Many saw the meeting as heralding Mr. Kushner's role as a key player on China. But he stepped back to avoid antagonizing other senior officials, according to a White House spokesman, and amid a swirl of questions about his family's business dealings with a Chinese conglomerate, the Anbang Group, and his sister's offer to obtain preferential American visas for Chinese who invested in the Kushner family's real estate projects. The spokesman, Raj Shah, said those business issues had nothing to do with Mr. Kushner's decision.

Mr. Schulze is not the only person who has offered to act as a broker for talks between the United States and North Korea. More than a dozen people approached the State Department during the last year with claims to have connections to people high in the North Korean government, according to current and former officials. Most led nowhere, and some diplomats are doubtful that any were truly consequential.

Such freelance diplomacy is also not unique to North Korea. When President Barack Obama signaled an interest in talking to Iran in 2009, several people, among them a former Spanish prime minister and an Omani businessman, approached the State Department to offer to act as an intermediary. The administration later set up a secret channel to meet with Iranian officials in the Arab sultanate of Oman.

During a trip to Beijing in September, Mr. Tillerson said the administration had "a couple, three channels open to Pyongyang" that he hoped might yield a breakthrough amid escalating tensions over North Korea's nuclear and missile programs. Mr. Trump scolded him on Twitter the next day, saying Mr. Tillerson was "wasting his time trying to negotiate with Little Rocket Man," the derogatory nickname he used in the past for Mr. Kim.

In fact, Mr. Pompeo was then exploring contacts with North Korean intelligence officials. He made two trips to Pyongyang this year, and, after he replaced Mr. Tillerson as secretary of state, continued to lead negotiations for a meeting between Mr. Trump and Mr. Kim. Mr. Pompeo communicated with Kim Yong-chol, a general who oversees inter-Korean relations and used to run North Korea's intelligence service.

During those discussions, Mr. Pompeo has relied on Andrew Kim, a Korean-American C.I.A. official who is in charge of the agency's covert operations and analysis on North Korea. He was at Mr. Pompeo's side when he traveled to Pyongyang, and on hand for Mr. Trump's meeting with Kim Yong-chol in the Oval Office two weeks ago after the president had called off the planned meeting — a decision he quickly reversed.

North Korea's motive for talking now, experts said, is linked to the progress it has made on its nuclear and ballistic missile programs. Having demonstrated the ability to strike the continental United States, the North believes it is in an advantageous position to strike a deal that would lift punishing sanctions.

There was also a determined campaign by South Korea, under the progressive government of Mr. Moon. When Kim Jong-un expressed a willingness in a New Year's Day speech to send North Korean athletes to the Winter Olympics in the South Korean town of Pyeongchang, Mr. Moon seized on the moment to push for a broader diplomatic opening.

The Games ended up being a striking display of Korean unity. Afterward, Mr. Moon sent the director of South Korea's National Intelligence Service, Suh Hoon, and his national security adviser, Chung Eui-yong, to Pyongyang to meet with Mr. Kim. At that meeting, they said, Mr. Kim extended an invitation to meet with Mr. Trump, which they conveyed to the president a few days later.

For all the role that spies played in arranging the summit meeting, it is hardly surprising that one of the earliest overtures came from an American investor with a history of doing deals in North Korea. Mr. Trump's blossoming relationship with Mr. Kim seems as much a business proposition as a diplomatic overture.

In Singapore last week, Mr. Trump showed Mr. Kim a four-minute film that the American government had made, which depicted a thriving, modern future for North Korea, so long as it gave up its nuclear weapons. Mr. Trump enthused about the country's idyllic beaches, which he said he could foresee being lined with luxury hotels and condominiums.

"Think of it from a real estate perspective," Mr. Trump said.

Mark Mazzetti reported from Washington and Mark Landler from Singapore