GUANGZHOU, China — A crisis over a mysterious ailment sickening American diplomats and their families — which began in Cuba and recently appeared in China — has widened as the State Department evacuated at least two more Americans from China on Wednesday.

The Americans who were evacuated worked at the American Consulate in the southern city of Guangzhou, and their colleagues and family members are being tested by a State Department medical team, officials said. It is unclear how many of them are exhibiting symptoms, but a State Department spokeswoman said Wednesday evening that "a number of individuals" had been sent to the United States for further testing.

For months, American officials have been worried that their diplomats have been subjected to targeted attacks involving odd sounds, leading to symptoms similar to those "following concussion or minor traumatic brain injury," the State Department says.

The cases in China have broadened a medical mystery that started in 2016, when American Embassy employees and their family members began falling ill in Havana. In all, 24 of them were stricken with headaches, nausea, hearing loss, cognitive issues and other symptoms after saying they heard odd sounds. The issue has roiled relations with Cuba, which immediately fell under suspicion, and led the United States to expel Cuban diplomats.

But with Americans now exhibiting similar symptoms in Guangzhou, American officials have raised suspicions about whether other countries, perhaps China or Russia, might be to blame.

That is sure to complicate already strained relations with both countries over a variety of economic, political and security issues. Russia has been accused of meddling in the 2016 American presidential election, trade disputes have erupted with China and American officials fear that the Chinese are undermining relations with North Korea ahead of a summit meeting with President Trump planned for next week.

The new illnesses in China come just weeks after American officials reported finding their first case here in Guangzhou, where a consulate employee got sick. Some American officials in this city live in apartment complexes filled with other foreigners and wealthy Chinese; that is where the ailing employees were subjected to unusual noises.

But it remains unclear whether the illnesses are the result of attacks at all. Other theories have included toxins, listening devices that accidentally emitted harmful sounds or even mass hysteria.

The mystery spread to China this spring, when the first employee fell ill, and fears escalated last month when the government warned other employees to seek medical attention if they experienced unusual ailments. So far this week, another employee, his wife and their two children were evacuated after the parents exhibited neurological symptoms. Officials said they expected that at least some others would be flown out of the country as well.

The illnesses appear more widespread than the State Department initially reported last month, when it said that one person had "reported subtle and vague, but abnormal, sensations of sound and pressure." 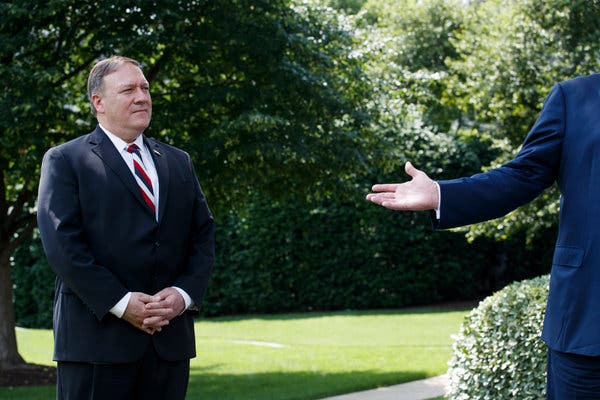 Secretary of State Mike Pompeo has made investigating the medical cases in China and Cuba a priority for the State Department.CreditTom Brenner/The New York Times

Secretary of State Mike Pompeo said last month at a hearing of the House Foreign Affairs Committee that the symptoms of the first American employee in Guangzhou to report being ill "are very similar and entirely consistent with the medical indications that have taken place to Americans working in Cuba."

There are roughly 170 American diplomats or employees in Guangzhou, as well as their family members, and a senior American official said a sizable number had undergone or would soon undergo testing by the State Department doctors who arrived on May 31.

The officials cautioned that no final determination had been made about what caused the illnesses.

The latest American employee evacuated from Guangzhou is Mark A. Lenzi, a security engineering officer at the consulate. He left Wednesday evening with his wife and two children after having suffered in recent months from what he described in an interview as neurological symptoms.

On Tuesday, Mr. Pompeo said in a statement that the symptoms in the first case discovered in Guangzhou were similar to the ones experienced by the 24 Americans who became ill in Havana. He said that the cause had not yet been established.

The injuries in Cuba, like those in China, followed disturbing sensations of sounds and vibrations that have been described variously as the noises made by cicadas, static, metal sheets waving or, in Mr. Lenzi's case, marbles rolling around a metal funnel.

After the injuries were diagnosed in Cuba, the Trump administration expelled 15 Cuban diplomats, saying Cuban officials had failed to adequately to protect American diplomats. The Cuban government denied any involvement and questioned whether any "attacks" had taken place. American officials suggested it was too soon to consider such a response in China, though they have raised it with the Chinese government.

On May 23, the State Department disclosed that an employee stationed in China had complained of "subtle and vague, but abnormal sensations of sound and pressure" over several months from late 2017 until April. That employee, who was evacuated, was not identified.

"We are not aware of any similar situations in China, either inside or outside of the diplomatic community," the department said in the health alert. It advised others with "concerns about any symptoms or medical problems" to consult a doctor.

The disclosure caused anxiety and anger among American government employees in China. Others have since come forward to report similar experiences or symptoms.

In a statement on Wednesday evening, the State Department's spokeswoman, Heather Nauert, said that "a number of individuals" had been sent to the United States for further testing and that the medical examinations continued in Guangzhou.

In 2016, diplomats at the United States Embassy in Havana were mysteriously stricken. Was it an attack? There is no official explanation, but the episode has played a big role in America's current political disengagement with Cuba.Published OnApril 18, 2018

Among those who reported symptoms was Mr. Lenzi. In an email sent to the entire staff of the consulate, he complained that the first employee was evacuated in April, but that no one was told of the health concerns until a month later — after doctors in the United States had found evidence of brain trauma. The initial health alert, he said in an interview, suggested it was an isolated case. "They knew full well it wasn't," he said.

The consulate, which opened in 2013, is a state-of-the-art building designed to withstand electronic eavesdropping and other security and intelligence threats.

In an interview before leaving China, Mr. Lenzi said that he had lived in the same apartment tower as the officer evacuated in April. It is one of several high-rise buildings in The Canton Place, a modern complex built around a plaza and bordered by restaurants, cafes and galleries. Another diplomat who reported symptoms was at a different upscale building near the consulate.

Mr. Lenzi said that over the past year he and his wife had experienced similar physical symptoms, including headaches, sleeplessness and nausea, and on three or four occasions they heard odd noises, though they did not put them together until the disclosures last month.

Even if people are evacuated for further tests, that does not necessarily mean that they have suffered injuries or illnesses, the officials emphasized. Only 25 percent of those evacuated from Cuba, for example, were later found to have health problems.

The United States Consulate in Guangzhou, left. The building, which opened in 2013, is designed to withstand electronic eavesdropping and other threats.CreditLam Yik Fei for The New York Times

But the Chinese cases have raised alarms inside the State Department. Now led by Mr. Pompeo, the department appears eager to avoid the criticism it faced over what some called its handling of the Cuba cases.

In addition to the department's medical team, William E. Todd, the acting director general of the Foreign Service, and Michael T. Evanoff, the assistant secretary of state for diplomatic security, flew to Guangzhou to assess the situation. Their visit was not announced in advance, and they were not made available to comment before departing on Wednesday.

In Tuesday's statement, Mr. Pompeo said he had created a health care task force to examine "the unexplained health incidents that have affected a number of U.S. government personnel and family members stationed overseas."

The statement left open the possibility that there have been similar events at other American embassies or consulates. One American official said that he was aware of reports of isolated episodes, but that there did not appear to be any discernible pattern.

Guangzhou is a major commercial hub of 14 million people on the Pearl River, about 75 miles north of Hong Kong. In addition to the embassy in Beijing and the consulates in Guangzhou and Hong Kong, the United States operates consulates in Chengdu, Shanghai, Shenyang and Wuhan.

Mr. Lenzi worked for the diplomatic security department, and he believes that his work could have made him a target. Before joining the Foreign Service in 2011, he worked with the International Republican Institute, funded by Congress, promoting democratic reforms in Ukraine and Georgia — two countries where Russia has denounced American involvement.

A version of this article appears in print on , on Page A1 of the New York edition with the headline: Cuba to China, Strange Illness Baffles the U.S.. Order Reprints | Today's Paper | Subscribe