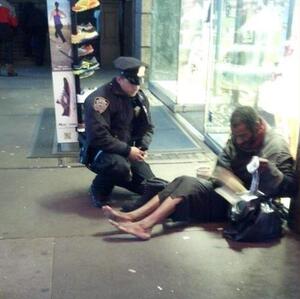 When news organizations, including ours, told of New York Police Officer Lawrence DePrimo buying boots for a barefoot man on the streets of Times Square one cold night last month, it seemed an irresistible holiday story: a kindly cop in a hard city helps a bedraggled man walking with blistered feet over some of the richest streets in the world.

The nameless, shoeless man became the best-known street person in America — just long enough to be recognized walking along the Upper West Side, where a New York Times reporter found him.

The man's name is Jeffrey Hillman. He turns out to be a 54-year-old veteran who is once again barefoot, telling the Times, "Those shoes are hidden. They are worth a lot of money. I could lose my life."

He had kind words for Officer DePrimo, saying, "I wish there were more people like him in the world."

But like a lot of New Yorkers, Jeffrey Hillman also kvetched.

"I was put on YouTube, I was put on everything without permission. What do I get?" he asked. "I want a piece of the pie."

In a week, Jeffrey Hillman went from being anonymous and overlooked to a public figure whose life was dissected as if he was running for office.

Just as we were writing stories to say life on the street is so fraught with risk that a homeless man cannot safely walk them in new shoes, the New York Daily News discovered that Mr. Hillman is not homeless. He has an apartment in the Bronx paid for by a federal program.

Even so, he has received Department of Homelessness services since 2009, although Commissioner Seth Diamond told USA Today that "doesn't mean our work is done with him. He is not dressed for the weather, he is not engaged in a healthy lifestyle, and he is not leading a productive life." Mr. Diamond suggested mental health and substance abuse might be at work, too.

I don't like to think that because Jeffrey Hillman turns out to be less needy and more complicated than he appeared to be in a tourist's video, Officer DePrimo's kindness now looks useless — or foolish. He saw a cold, hurting man and helped him on the spot. He didn't tell him, "Don't worry, sir, I contribute to charities and support government programs that will help a lot of people who suffer from a social pathology similar to yours." He bought the man a pair of shoes.

Part of what makes an act of giving truly kind is that we recognize ourselves in those who need help, and know, but for a few zigs, zags and accidents, that could be us.