When your kid shows interest in a popular phenomenon, usually there's not much to understand—you just help them turn on the videos, and put the toys on their birthday wish list. But it's a little trickier when your kid comes home and insists that they need to play Minecraft. You have some learning to do.

If you're nervous about letting your kid log on to a server with other people, it may help to know that they don't have to. We'll discuss below how to set up a multiplayer world, but there are plenty of ways to do that while keeping the world private. Minecraft is also tons of fun in single player mode. If you do end up introducing your child to public servers, you'll probably want to have a talk with them about online safety, and it may be a good idea to play with them at first. 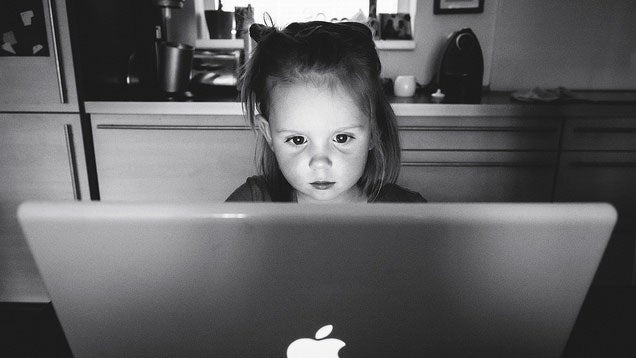 We teach our children to be safe in the real world, when walking to school or meeting strangers,...

Pick a Platform and Install the Game

There's a version of Minecraft for every platform. The cheapest, and easiest to install, is the Minecraft Pocket Edition app. It's $6.99 on iOS and Android. Once it's installed, you just hit Play, create a world, and you're off.

Pocket edition has a limited set of inventory items and commands. You can still do a ton of fun things, but currently the game lacks large "boss" monsters to battle, and you don't have access to some of the lesser used items. The mobile app will do almost anything you can think of, but if you want the most flexibility down the line and the physically largest worlds, go with the desktop version. We imagine though, that your child will probably have a preference as to the platform you buy and install on.

The traditional and most full-featured way to play is on a computer, with the version that runs on Windows, Mac, or Linux. The software is free to download, but you have to pay a one-time fee of $26.95 to create an account. The program won't run unless you log in.

Minecraft is also available for the Xbox 360 and Xbox One, PlayStation 3 and 4, Wii U, and a handful of other console and mobile platforms,at varying price points in the $20-$30 range, with licenses available either through direct download or physical copies, whichever you prefer. Once you've installed the version Minecraft of your (or your child's) choice, create a Single Player world for starters, and begin exploring.

Even if it's your kid that will be doing the gameplay, you'll want to have a sense of how to move around and use objects in the game. I can't count how many times a kid asked me how to do something, I googled and confidently told them the answer, and then felt a little clueless when they handed me the device and said "Show me how."

On a computer, the w, a, s, and d keys control which direction you walk, and your mouse position controls where you look. Left click destroys a block; right click places the block you are holding. Similarly, interact with objects with a click: left click to hit, right click to use an object. So, for example, hold a bone and right click on a dog to give the dog a bone. Left click to smack the dog with the bone.

The space bar lets you jump, and in creative mode (more about that below), you can fly. Double tap the space bar to start flying, and tap it again to move higher. Shift lowers you down, and another double space drops you to the ground.

On a touch screen device, you'll have arrow buttons on the left side of the screen for walking, and a separate button for jumping or flying on the right. Swipe the screen to look around. Place blocks with a tap, and destroy them by tapping and holding. You can use some items by tapping, others by tapping and holding, and still others by looking for a special button to appear at the bottom of the screen. For example, if you hold an apple and approach a horse, there will be a "feed" button. You can read more about all the different controls for all the different platforms on the Official Minecraft Wiki.

To manage your inventory, press "e" on your keybord (on the desktop) or tap the "…" button next to the row of nine empty boxes at the bottom of the screen (on mobile.) Scroll through to see what you've picked up, if you're playing in survival mode. In creative mode, you can also search and scroll through hundreds of items that are yours for the choosing. Those nine empty boxes, by the way? Those are your "hot bar" of readily accessible objects. You can drag items from your inventory into them to use them quickly, like with a single tap or keypress, which comes in handy later.

So what do you do in Minecraft, anyway? What is your kid trying to accomplish when they spend hours at the computer playing? You already know the answer, actually: you mine blocks from your surroundings, and you use them to craft new things. Imagine walking through a world made of lego blocks as far as the eye can see. You can break off a block from the ground, from a tree, anywhere you like, and then you can use the blocks you've gathered to make something new.

In survival mode, you arrive in Minecraft land with literally nothing. You can karate-chop the world with your hand to gather blocks of dirt and wood. You can make a pickaxe out of wood, and use it to mine for stone. Then you can make a better pickaxe out of stone. In the meantime, you'd better create a shelter before dark, because that's when the monsters come out. If they get you, you die:

Survival minecraft can be challenging and fun, but young kids are often more interested in building things, spawning animals, and exploring all the different types of objects that exist in the universe. (Me too, honestly.) You can do all that without fear of being killed by Creepers if you play your game in creative mode. That means you don't have any damage or hunger meters, you can fly, and you can have as many as you want of anything. Diamond armor? Golden apples? Potions that let you see in the dark? All yours!

Fun Things to Try with Your Kids

Here are some things you can do right away. They're easy in creative, and possible (if you can gather the materials) in survival. Best of all, if you're new to the game, you can do them yourself, or if you're installing for your kids or playing along with them, they're fun for everyone involved.

I learned all of these tricks from my six-year-old son, who in turned learned them from watching YouTube. As an adult, you may not have noticed, but roughly half of YouTube is just videos of people playing Minecraft. You can find a guide to the best channels, with notes on their kid-friendliness, at Common Sense Media.

Be warned: these videos often show features that go far beyond what you can find in an ordinary Minecraft installation. There are mods (modifications to either clients or servers), resource packs (which change game features like the appearance of blocks), maps (pre-built worlds), and mini-games (maps set up for solo or competitive games).

In single player mode, you can set your kid up with a world of her own that she can build and proudly show you all about. But if you really want to play with your kid, you'll need to learn about multiplayer Minecraft. There are three big ways to play multiplayer:

Pocket edition, Windows 10, and consoles support those same three ways of connecting with other players, but are incompatible with PC/Mac editions. Realms subscriptions are, likewise, available either for the PC/Mac edition or the Pocket/Windows 10 edition. That means you can't play on your phone and connect to your kid's desktop-based world. Try both if you like, but make sure you consider which ecosystem you want to stick with before your kid starts building that massive castle.