Did you notice John McAfee's three-day absence from Twitter? No? Well he has a really good explanation for it: he says he was poisoned.

Yes, it's that John McAfee, the tech eccentric who founded the cybersecurity company McAfee Associates and later became a major cryptocurrency investor. He's a hardcore libertarian who ran a failed run at the 2016 presidency (and will try again in 2020) based on promoting cryptocurrency and abolishing the war on drugs.

Took to Twitter on Friday to explain his absence — he had spent two days unconscious in the hospital because, he claims, he was poisoned by his enemies. But he survived because he is "more difficult to kill than anyone can possibly imagine." 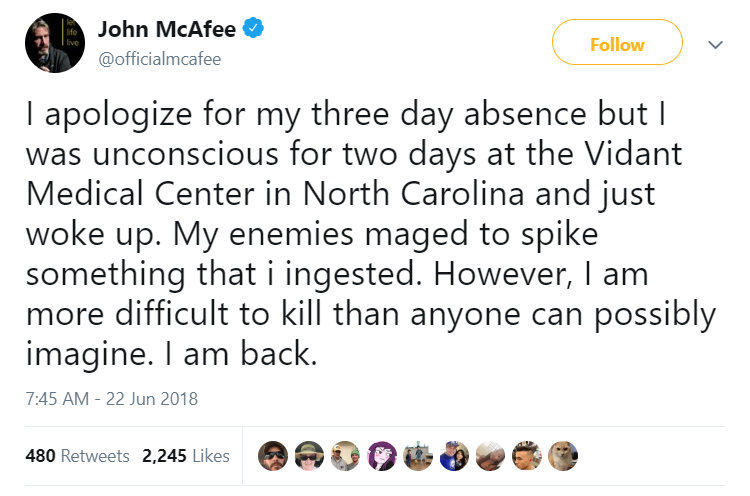 In a subsequent tweet, McAfee posted photos of himself in a hospital bed and claimed that he knew who was responsible for his alleged poisoning. They, he wrote, "will soon understand the true meaning of wrath," but as of yet hasn't clarified who he thinks poisoned him (though he claims it's not his wife) or provided any evidence whatsoever that wrongdoing actually occurred.

Futurism reached the patient information team at Vidant Medical Center in North Carolina, where McAfee claimed in his tweet that he had been recovering, who said they couldn't find a record of him as a patient. Based on a little zoom-and-enhace sleuthing on one of the photos McAfee tweeted, Futurism determined who his doctors are likely to be. They are, it seems, at Vidant Outer Banks Hospital in Nags Head, North Carolina; that hospital's patient services team told Futurism that they had no record of a patient named John McAfee there, either. 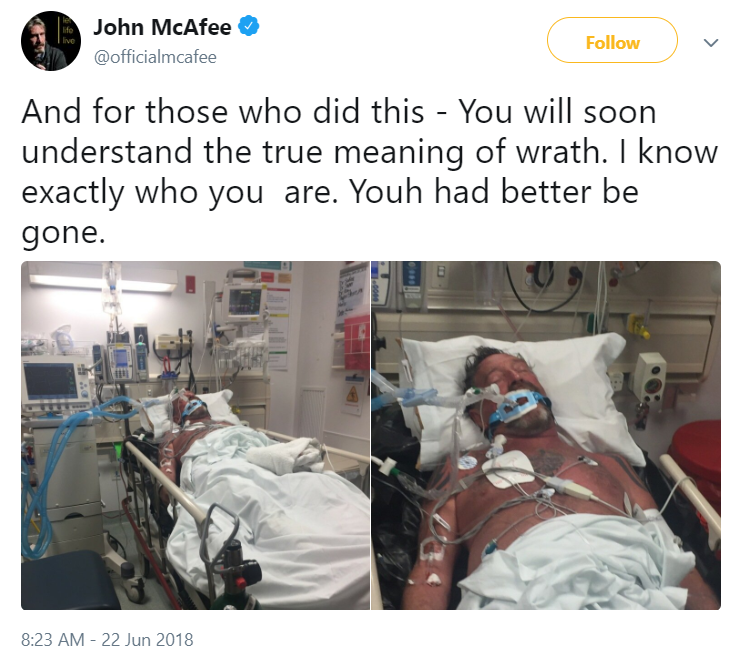 We don't know who poisoned McAfee (if that was, in fact, the reason he was hospitalized). But we do know that he already says he has enemies: the notorious U.S. Securities and Exchange Commission (SEC). In May, The Independent reported that McAfee feared for his life and that he felt he was being pursued and targeted by the SEC for his involvement in the cryptocurrency space. At that time, McAfee said he went into hiding out of fear that the government would kidnap and perhaps assassinate him. How his "enemies" in the SEC might have gotten to him while he was in hiding is still unclear.

Just a few days ago, McAfee announced that he would no longer work on launching or promoting new cryptocurrencies via Initial Coin Offerings (ICOs) because the SEC had threatened him, according to Coindesk. Is he was merely referring to the SEC's decision to consider some ICOs subject to securities law? Or were additional (real or imagined) threats issued directly to him by the government.

And we also know that McAfee has cried wolf before. Last September, he was busy getting busy when he thought he heard an intruder at his home and unloaded his gun into the walls. In that incident, according to Newsweek, McAfee once more cited a major government conspiracy that included local drug cartels, his wife, and high-ranking officials in the federal government.

Another example: in July last year, McAfee was hospitalized after what he claimed on Twitter to be "an attempt to off him." In a subsequent tweet, he revealed it was all a hoax: "Hey... everything is well folks. Never leave a wife in charge of Twitter while you're recuperating from an operation.

Right now, all we really know is that McAfee claims was poisoned and that there is a photo of him in a hospital bed. Those two things could be connected, but they might not be.

And we know this is a man with a history of making fantastic claims, and has done so once more. And sometimes it's fun to be online when that happens.

This is a developing story. We will update it as more information is available.