Once you've acquired a certain reputation among fossil collectors—like when you're the guy whose research inspired Michael Crichton's book Jurassic Park—you start getting interesting packages in the mail. And so George Poinar Jr. received in his mail one day a piece of amber. Inside that lump of fossilized resin was a tick, still full of blood some 20 million years old.

Poinar, now a retired professor at Oregon State University, has studied hundreds insects caught amber. His research that caught Crichton's attention was on a fossilized fly, so well-preserved that its muscle fibers and sub-cellular structures were visible. Crichton conjectured dinosaur blood ingested by a bug in amber might still contain viable DNA, and so the plot of Jurassic Park, and so on. ("Very nice, tall person," Poinar recalled about Crichton.)

But even Poinar had never seen a specimen quite like this tick. "I was amazed when I looked down at the tick and discovered that it was actually surrounded by blood cells," he said. The cells were mammalian red-blood cells—characteristically doughnut shaped and lacking a dark nucleus.

These appear to be the first fossilized mammalian red-blood cells ever found. "It is a novel and interesting report," said José de la Fuente, who studies ticks and tick-borne pathogens at the University of Castilla-La Mancha. Poinar also found parasites inside the tick, related to modern-day ones that still infect mammals.

Ticks are rare in amber because they like blood; they don't have much business hanging around trees excreting sticky resin. "It's amazing when you consider all the things that had to happen in order for this to arrive under my microscope," said Poinar. He started listing them off for me: "It had to be two monkeys  grooming each other. … It had to be the tick fell into the resin. It had to be that resin then lasted to mature into amber. It had to be the piece was picked up by miner in the one of the amber mines. Then it had to be sent to me."

Poinar's arrived at this chain of prehistoric events with educated guesses. The size and shape of the red-blood cells suggest mammals. Dogs might also fit, but he notes there is no fossil record of canine ancestors in the Dominican Republic, where this piece of amber was found. There is a fossil record for primates, though, and they hang around trees. Also, the tick has two tiny holes in its back—as if punctured by the small, sharp nails of a juvenile monkey who picked it up and threw it while grooming another. Presumably, the tick then landed in tree resin.

The recent history of this tick we can trace with more certainty. The package in the mail that day came from Alex Brown, a retired tennis player and amber collector who has known Poinar for decades. Brown used to teach Poinar's kids tennis when they lived in Berkeley, California, and the scientist started bringing pieces of amber along. "He got a beetle and next week a moth, and pretty soon he started to pay for his lessons with amber," said Brown. Brown got hooked. He started collecting amber on his own, and the two ended up co-authoring several papers about fossilized insects together.

In this case, Brown bought the tick from Vincent Calabrese, who sells amber on eBay, and sent it to Poinar to study. While ticks are unusual in amber, no one knew exactly how unusual this one was. Only after Poinar put it under his microscope did the red blood cells and the parasites show up.

I had to ask the burning question, the Jurassic Park question: Was there any intact DNA in the tick?

The parasites are similar to modern-day Babesia, a malaria-like organism spread by ticks that infects livestock, pets, and occasionally humans. Poinar gave the ancient parasite a name: Paleohaimatus calabresi. "Paleohaimatus" for "old blood" and "calabresi" for Vincent Calabrese. This was Poinar's second paper on a piece of amber from Calabrese, and the name was a small token of gratitude. The two men have never met in person. 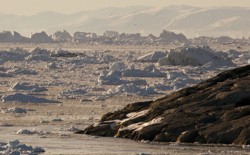 To look at the blood cells and parasites under the microscope, Poinar had to cut into the amber and destroy part of the tick. But an small intact part remained. So as we wrapped up our conversation, I told Poinar I had to ask the burning question, the Jurassic Park question: Was there any intact DNA in the tick? "It's kind of  long shot," he said. "But I would have loved to [sequence it] if I had enough material."

Poinar and others have extracted DNA from insects embedded in amber before. Getting DNA from the blood would likely be a lot harder. Mammalian red blood cells don't contain any DNA, though less common white blood cells do. That doesn't leave much DNA to work with, especially after millions of years. "We'll keep it and see," said Poinar. "Maybe people will try."

Just so you know, that would make it Miocene Park.