WINSTON-SALEM, N.C. — Jill Abramson, the former executive editor of The New York Times, made her first public appearance since her abrupt dismissal last week, speaking about resilience in a long-scheduled commencement address on Monday at Wake Forest University.

In an 11-minute speech greeted with applause and laughter, Ms. Abramson said her father had always emphasized that it was as important to handle setbacks as to embrace success.

"I'm talking to anyone who has been dumped," she said. "Not gotten the job you really wanted or received those horrible rejection letters from grad school. You know, the sting of losing, or not getting something you badly want. When that happens, show what you are made of."

She said she was asked by a student whether she might remove a tattoo on her back of the Times' gothic T. "Not a chance," she said.

"It was the honor of my life to lead the newsroom,'' she said.

At least for the morning, a buzzing Manhattan news media story was transported from Midtown offices and boardrooms to a sunlit quad, surrounded by trees and stately buildings, alive with the excitement of graduating students in black gowns and mortarboard hats with black and gold tassels. Alongside the parents, students and others taking their seats were reporters from news organizations including Politico, The Wall Street Journal and several television stations. 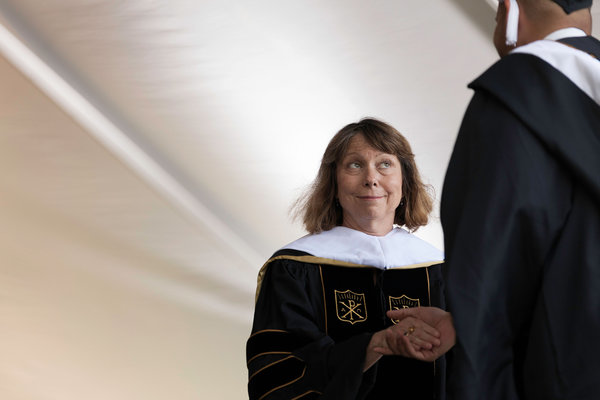 Jill Abramson, the former executive editor of The New York Times, during the commencement ceremony on Monday at Wake Forest University.

"I'm impressed that your achievements here have attracted so much media attention," she joked at the beginning of her address. She said her biggest concern about speaking at the commencement was that "the small media circus following me would detract from you, the class of 2014."

Ms. Abramson entered the ceremony in a procession with faculty and administrators, wearing a black gown with three black and gold stripes on the arms. She was introduced by Albert R. Hunt Jr., a Bloomberg News columnist, who called her appointment by The Times three years ago, as the first female executive editor, a "seminal step.'' Mr. Hunt praised her for leaving The Times "better, stronger and more vibrant than ever."

Ms. Abramson stood behind a lectern and addressed thousands of students seated in the university's bucolic quad. Under a yellow and white striped marquee, in front of the spire of the university's Wait Chapel, she spoke slowly and clearly, despite Mr. Hunt's lighthearted warning to the graduates that her strong New York accent might require a translator.

Approached by reporters when the ceremony ended, Ms. Abramson said she understood that the news media had a job to do, but that she had nothing more to say.

"There were definitely different expectations," said Wade Collins, 22, graduating with a bachelor's degree in mathematical economics. "Some people expected her to go hard at what happened. But she walked the line really well. And this was interesting. These speeches can be really dull."

Since the publisher of The Times, Arthur Sulzberger Jr., announced on Wednesday that she would be replaced by her No. 2, Dean Baquet, Ms. Abramson had not publicly discussed her ouster. Mr. Sulzberger had tried to bring off a smooth transition, but Ms. Abramson declined to participate in a more peaceful handover, according to people with direct knowledge of the situation.

In his initial announcement, Mr. Sulzberger said only that he had fired her because of "an issue with management in the newsroom."

Last week, a report on The New Yorker's website suggested that she had been fired for seeking equal pay with her predecessor, Bill Keller, setting off a debate on gender equality. Those reports were strenuously denied in statements from The Times, which included the assertion that Ms. Abramson earned 10 percent more than Mr. Keller by the time her tenure ended.

In response to those reports, and a growing debate over whether gender played a role in her dismissal, Mr. Sulzberger issued two more statements about Ms. Abramson in an attempt to quell the furor over her departure. In one statement, issued Saturday, Mr. Sulzberger wrote, "I concluded that she had lost the support of her masthead colleagues and could not win it back."

A precipitating factor in Ms. Abramson's departure was a controversy surrounding the paper's attempts to hire Janine Gibson, a senior editor at The Guardian newspaper, according to people with direct knowledge of the discussions. Mr. Baquet was not aware that Ms. Abramson had made an offer to Ms. Gibson, and only learned about it during a lunch with Ms. Gibson. This angered both Mr. Baquet and Mr. Sulzberger, who had been led to believe that the rest of the masthead was kept up-to-date about the offer to Ms. Gibson, these people said.

Ms. Abramson, 60, had been confirmed as the speaker at Wake Forest for some weeks, said Nathan O. Hatch, the university's president, in an interview before the commencement. She was recruited to speak by Mr. Hunt, a Wake Forest alumnus and member of the college's board of trustees.

After the news of Ms. Abramson's dismissal, Mr. Hatch said, "We called her on Thursday, and she still wanted to do it."

The controversy has brought more attention to the speech, Mr. Hatch said, and will perhaps have extra significance for graduates who are "coming into a world where they may have 20 jobs in their lifetimes," and will need to learn resilience. For female students, especially, he said, "I do think it has extra resonance."

Mr. Hatch, following Ms. Abramson, spoke on the value of teamwork. "Great teams," he said, "require trust in each other."

Near the end of her address, Ms. Abramson said: "What's next for me? I don't know. So I'm in exactly the same boat as many of you. Like you, I'm a little scared, but also excited.''