Today is Harvey Milk Day, and the White House is remembering the California politician and LGBT activist by unveiling a new forever stamp. Every year, a citizen advisory committee sifts through thousands of proposals to pick the 20 subjects that the U.S. Postal Service commemorates with a stamp.

Milk became the first openly gay person to be elected to public office in California when he won a seat on San Francisco's Board of Supervisors in January 1978. He was assassinated in November that year by a former supervisor. This undated image released by the United States Postal Service shows the Harvey Milk Forever Stamp. The U.S. Postal Service will feature Milk, the California politician and gay rights icon, on its commemorative stamp. The image is based on a photograph taken around 1977 as Milk stood outside his Castro Street Camera Store in San Francisco. (AP Photo/U.S. Postal Service)

The Harvey Milk Foundation released a statement regarding the ceremony. They noted, "As letters and postcards are sent across the nation and around the globe, they can now bear the face of a man who gave his life in the struggle for human rights to ensure equality for every minority group and marginalized community. The Harvey Milk Forever Stamp, which further memorializes Harvey's legacy of hope, is a gift to help us all remember where we've been and the work we still need to do." Today is not the first time Obama has commemorated Milk either. In 2009, he posthumously awarded him the Medal of Freedom.

Today's ceremony is also not the first time a presidential administration saw a stamp with particular symbolic appeal and decided to throw it a party.

Take Me Out to the Ball Game

The last stamp to be celebrated at the White House featured not a person, but a song. In 2008, President George W. Bush commemorated a stamp celebrating the centennial of "Take Me Out to the Ball Game." The event also featured a All-Star tee-ball double header, and country singer Kenny Chesney sang the song everyone was there to celebrate. Bush hosted 20 tee ball games at the White House during his presidency.

The ceremony marked the first time the philatelic press was invited to cover the White House. Lloyd A. de Vries of the Virtual Stamp Club was one of them. Here is his report. 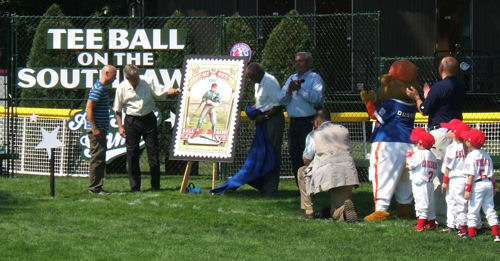 De Vries concluded his dispatch by writing, "I wouldn't want every stamp issued at the White House, or even every high-profile stamp, but once a year or every few years is good."

The Breast Cancer Research stamp was the first semipostal in American history when it was released in 1998 at a White House ceremony. Semipostals, or charity stamps, cost more than your typical stamp. The extra revenue generated by the stamp sales is then donated to charity.

Sens. Dianne Feinstein (D-Calif.), Alfonse D'Amato (R-N.Y.) and Lauch Faircloth (R-N.C.) introduced the legislation to create the stamp, and it has been reauthorized eight times since.

Charity stamps are a relatively new creation in the United States, but they've been around since 1897. Australia issued the first, according to Linn's Stamp News. The stamp collected funds for a home for people with tuberculosis. Many other countries that released charity stamps used them to fight tuberculosis. After issuing a stamp to benefit the Boer Wars in 1900, Australia stopped releasing semipostals. Belgium is likely the world leader in stamp fundraising. The country has released nearly 1,200 semipostals.

Linn's Stamp News reported that the arrival of America's first semipostal was not met with great fanfare from the country's stamp collecting community.

The issuance of this semipostal stamp evoked a great hue and cry from parts of the U.S. stamp-collecting community who decried it as an unfair tax on stamp collectors. It was not just the Breast Cancer Research semipostal stamp itself, but the idea that it might be the thin end of the wedge, that caused the alarm. The alarm was not unfounded. Congress gave the USPS the authority to issue semipostal stamps in legislation signed by President Clinton on July 28, 2000.

Randy Neil, president of the American Philatelic Society, wrote a letter to Clinton asking him to veto the bill creating the stamp, arguing, "Stamp collectors see semipostal stamps as a tax that falls disproportionately and unfairly on our hobby. Stamp collectors will buy a substantial percentage of these stamps and as a consequence pay a substantial portion of the premium."

John Hotchner, former president of the American Philatelic Society, will admit he wasn't a fan of the stamp at the time either. But, he says now, "it has raised a bunch of bucks for research. I don't think there is anybody who would now say it was a bad idea."

Hotchner attended the White House ceremony as a member of the citizens advisory committee. "Hillary Clinton presided over the room," he said, "and she lit up the room."

As of March 2014, the Breast Cancer Research stamp had raised $78.7 million for breast cancer research. More than 970 million stamps have been sold. In 1978, Rosalynn Carter hosted a White House ceremony for a stamp celebrating cancer researcher George Papanicolaou.

In 2002, President Bush released the second U.S. semipostal, which raised money for victims of the terrorist attacks on September 11, 2001, that had happened six months earlier. The stamp was also notable because it featured living people — firefighters who raised an American flag at the World Trade Center site. The U.S. Postal Service traditionally does not feature people on stamps until 10 years after their death. The three firefighters and the photographer who took the photo used in the stamp were in the Oval Office when Bush unveiled the stamp.

In 1995, President Clinton unveiled a stamp remembering captured and missing in action American veterans at a White House ceremony. Postmaster General Marvin Runyon said at the time, "Of all the stamps we issue each year, none is more important than those which honor our nation's heroes." A similar stamp was released in 1970. In 1979, President Carter hosted a ceremony for the "Honoring Vietnam Veterans" stamp.

In 1961, President John F. Kennedy held a first-day-of-issue ceremony for a stamp commemorating Sun Yat-sen, the first president of China. The postmaster general at the time, J. Edward Day, said that the stamp was a symbol of China's "struggle for freedom." The stamp was controversial. The National Postal Museum described the uproar:

Having recently experienced McCarthyism and the Red Scare of the 1950s, Cold War Americans harbored strong anti-Communist feelings, and the stamp sent shockwaves across the nation. Even though the postmaster's speech at the first day ceremony emphasized the similarities of Sun's and America's ideals, citizens vehemently objected to a stamp honoring Sun. The letters frequently mentioned that Sun's wife, Madame Sun (Soong Ching-ling), was an active member of the Communist regime. Several asked if Khrushchev or Castro would appear on stamps in the future.

In 1948, President Harry Truman hosted a first-day ceremony to commemorate a stamp featuring National Youth Month. According to the National Postal Museum, "National Youth Month was conceived as part of a broad national campaign to combat delinquency in response to reports from the National Conference on Prevention and Control of Juvenile Delinquency." Three teenagers were awarded 50 free stamps at the event:

Phyllis Tucker, 14, of Maryland, a victim of polio on crutches at the ceremony; Peter Owens of New York City, winner of the Boys Club title of Typical American Boy; and George R. Ware, 16, of Washington, a senior at Dunbar High School and winner of a prize for schoolboy patrolman.

The politics of stamps

Although presidents often hold ceremonies for stamps, they don't always get to pick the stamps they want, as this article published in The Washington Post in 1987 shows. Michael Laurence, editor of Linn's Stamp News, gossips about the state of stamps.

He also noted such trival subjects as "horses and puppy dogs," and said, "During election years, the number of weird ethnic heroes seems to increase."

[C. Belmont] Faries, 73, described by Laurence as the "grand doyen" of stamp design, allowed that his 15-member committee, which works in secrecy, has honored the little known, not the unworthy. Besides, he noted, the final say on any stamp is up to the postmaster general and some, including William F. Bolger, postmaster general from 1978 until last year, have been notorious for the freedom with which they promised petitioners stamps. "They used to say that he couldn't go to a Georgetown cocktail party without promising two stamps," Faries said.

Presidents have demanded stamps, only to be turned aside by his panel, Faries said. When President Jimmy Carter insisted on a stamp honoring the late George Meany, head of the AFL-CIO, a year after his death, the committee cited rules requiring that an honoree be dead for 10 years. The only exception is a president, who can be given a stamp on his first birth date after his death, and Carter did not want to place Meany on the same level with presidents, Faries said.

As a compromise, the Postal Service quickly agreed to issue a stamp honoring the labor movement, and it was issued at a White House Labor Day picnic.