DrLupo, a popular host on Twitch, the game-streaming site owned by Amazon, playing Fortnite Battle Royale. Commenters weighed in on a chat scroll on the right side of the screen.

Late on a recent night, more than 600,000 people watched one of the most popular video game players, Tyler Blevins, engage in Fortnite Battle Royale with a celebrity guest: Drake.

Mr. Blevins streams his near-daily video game sessions live on Twitch, a website acquired by Amazon in 2014 for $1.1 billion. He makes more than $500,000 a month on the platform, thanks to his 250,000 paid subscribers, and some of his sessions can last 12 hours. Mr. Blevins, who plays under the name Ninja, is popular not only because of his gaming skill, which is considerable, but because of his draw as a host.

Drake was deferential to Mr. Blevins as they teamed up before an audience that peaked at roughly 667,000 viewers, a ratings record (since broken) for a nontournament live stream. As the game progressed, the world-famous rapper played a supporting role, collecting supplies for Ninja, seemingly content to lend a hand to a master at work.

Like others who make significant money on Twitch, Mr. Blevins is a born talker, and he bantered with the fans as he and Drake played. Drake joined the conversation, too. He told the commenters that he liked pineapple on his pizza and explained that he was a Ninja fan before Twitch, back when Mr. Blevins, 27, first found fame among gamers on YouTube and Instagram.

The popularity of the March 14 Drake-Ninja summit illustrated how dominant Amazon remains in the game-streaming world, despite intense competition from a roster of tech giants: Google, Microsoft, Facebook and Twitter.

Streamlabs — a San Francisco tech company whose software allows viewers to tip streamers, giving the company insight into an opaque ecosystem — suggests that Amazon's lead may be all but insurmountable. Its data shows that, in the last quarter, the average number of people watching Twitch's streams at any given moment increased to 953,000, up from 788,000. Twitch's archrival, YouTube Gaming, averaged 272,000 concurrent viewers, down from 308,000 in the previous quarter, Streamlabs reported.

YouTube pushed back against the data, but declined to provide numbers of its own. "We have truly gotten bigger every single month in live gaming, and live gaming viewership is up over two times, year over year," said Ryan Wyatt, a YouTube vice president in charge of gaming content. (Ali Moiz, the Streamlabs chief executive, stood by his company's report. "They should publish their data, if they think this is wrong," he said of YouTube.) 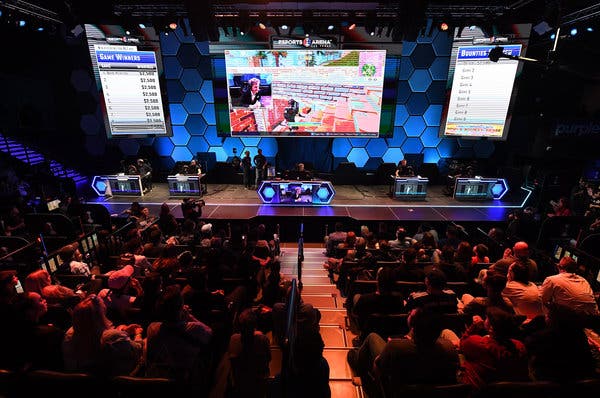 Tyler Blevins, a streaming video game player known as Ninja, taking on dozens of challengers at an event in Las Vegas in April.CreditEthan Miller/Getty Images

Twitch began in 2011 as an offshoot of Justin.tv, a lifecasting site founded by two Yale graduates, Emmett Shear and Justin Kan. They started the platform after they found that viewers were more interested in watching their lifecasters play video games than eat or sleep. Big tech companies came courting, and Amazon beat out Google.

In the four years since the sale, video gaming as a spectator sport has gone mainstream, and Twitch has captured the majority of those who want to watch it live.

For the dedicated fans, the live, freewheeling sessions on Twitch have the appeal of a major sporting event crossed with a talk show. The interaction between the host and viewers is one key to the site's success, making for an involved viewing experience that is markedly different from the prerecorded and edited videos of game sessions that have long been popular on YouTube.

On Twitch, the player's face, when visible, typically inhabits a small part of the screen, and the world of the video game takes center position. On the right side of the screen, endless comments from the viewers — mostly male, mostly young — appear in a continuous scroll.

Until Twitch came along, YouTube, a subsidiary of Google, was the main hub for gamers. But its focus was on recorded, edited gaming sessions, which are markedly different in tone from the long-form streams that have riveted Twitch fans. In an effort to win over the live audience, Google created YouTube Gaming a year after Amazon entered the fray.

Craig Riches, who plays under the name PythonDB, has posted his Minecraft videos on YouTube proper since 2010. Despite his affiliation, he said the Amazon-owned site remained well ahead of Google's foray into live game-streaming.

"It's no secret that YouTube Gaming is still playing catch-up to Twitch's platform," said Mr. Riches, 23.

When the rapper Drake played Fortnite Battle Royale with Mr. Blevins on Twitch, the streaming audience peaked at around 667,000 viewers.CreditDave Simpson/WireImage

The hosts on Twitch, some of whom sign up exclusively with the platform in order to gain access to its moneymaking tools, are rewarded for their ability to make a connection with viewers as much as they are for their gaming prowess. Viewers who pay $4.99 a month for a basic subscription — the money is split evenly between the streamers and Twitch — are looking for immediacy and intimacy. While some hosts at YouTube Gaming offer a similar experience, they have struggled to build audiences as large, and as dedicated, as those on Twitch.

"You have this really unique live interaction you don't get with YouTube videos," said Meg Kaylee, a streamer and host on GameStop TV who built her career playing various games on Twitch after starting on YouTube. "It's a completely different experience."

Citing Twitch's fervent audiences and the "better job" the company does in communicating with talent, Ms. Kaylee, 20, added that she had never really considered signing up with YouTube Gaming.

Other Twitch competitors include Mixer, a comparatively small service from Microsoft that hopes to capitalize on the success of the company's Xbox gaming console. Twitter has entered the field by bidding aggressively to broadcast e-sports on Twitter Live, while offering its live-stream platform, Periscope, as a gathering place for gamers. Facebook has also been scrambling to get in on the growing medium, courting individual gamers and adding the ability to tip streamers on Facebook Live as part of its "gaming creator pilot program." (Earlier this month, the company also launched a centralized portal for gaming content called Fb.gg.)

Facebook Live, Periscope and Mixer all grew quickly in the last quarter, according to Streamlabs, but none have approached the scale of Twitch. The number of those watching game streams on Facebook's platform, for instance, increased to 56,000 from 27,500, according to the firm's estimates.

Even with the rise of live streaming, gamers have continued to do big business posting recorded videos on YouTube's main site, which reports 1.8 billion "logged in" users a month, making it much larger than Twitch, which claims around 100 million monthly viewers. Mr. Wyatt, the YouTube executive, noted the full scope of YouTube's gaming content, which includes the videos posted on the main site and the live streams on YouTube Gaming, in comparing it with the Amazon-owned platform.

"The size and scale and businesses is not comparable from YouTube to Twitch," Mr. Wyatt said. "Everything that I've seen indicates that video-on-demand will be the biggest part of gaming content consumption."

Meg Kaylee playing House Flipper on Twitch. "You have this really unique live interaction you don't get with YouTube videos," she said.

He also pointed out that YouTube Gaming offered a different kind of programming: its live sessions last "a couple hours at a time" — a sharp contrast with the typical Twitch marathons.

Still, YouTube created YouTube Gaming in direct response to Twitch. During its first few months, in 2015, the platform's hosts complained about the lack of ways to make money and asked for better tools for managing chat streams, which can easily descend into toxicity.

"It took them a really long time to bring out basic features you would have on Twitch," said Cole Riness, a professional YouTuber who specializes in family-friendly gaming videos.

YouTube has taken steps to address the complaints. Most notably, as of April, its subscription systems — for live and recorded content — have been unified. As for support, Mr. Wyatt said, "I would argue that we certainly have equivalent moderation tools to any other service on the market."

Other challenges have proved more difficult for YouTube Gaming to solve. The site's copyright policing has frustrated some hosts, who have found themselves penalized, or even barred, because music was playing in the background of their sessions. Twitch has a reputation for being less punitive — or perhaps just less aware — where copyright issues are concerned.

While YouTube has made millionaires out of the creators of popular videos through its advertising program, Twitch's hosts make money primarily from subscribers and one-off donations or tips. YouTube Gaming has made it possible for viewers to support hosts this way, but paying audiences haven't materialized at the scale they have on Twitch.

Now that it seems well on its way to becoming synonymous with long-form live video gaming, Twitch's competitors may be running out of time to take their shot.

Brandon Freytag, a former Twitch employee who is chief executive of Loaded, a talent agency that represents Mr. Blevins, said the most credible challenge to Twitch's hold on the industry may come not from another tech company but from within. The most popular hosts, he noted, could be enticed to leave it for another platform, or create their own. They could also make demands of Twitch itself.

The popularity of its stars is a force Twitch has yet to reckon with. For now, Mr. Freytag said, the calculus for hosts like Mr. Blevins is pretty simple: "Everyone is on Twitch."