After seeing the price on the left for "One Snowy Knight" on Amazon, the author asked: "How many really sell at that price? Are they just hoping to snooker some poor soul?"

SAN FRANCISCO — Many booksellers on Amazon strive to sell their wares as cheaply as possible. That, after all, is usually how you make a sale in a competitive marketplace.

Other merchants favor a counterintuitive approach: Mark the price up to the moon.

"Zowie," the romance author Deborah Macgillivray wrote on Twitter last month after she discovered copies of her 2009 novel, "One Snowy Knight," being offered for four figures. One was going for "$2,630.52 & FREE Shipping," she noted. Since other copies of the paperback were being sold elsewhere on Amazon for as little as 99 cents, she was perplexed.

"How many really sell at that price? Are they just hoping to snooker some poor soul?" Ms. Macgillivray wrote in an email. She noted that her blog had gotten an explosion in traffic from Russia. "Maybe Russian hackers do this in their spare time, making money on the side," she said.

Amazon is by far the largest marketplace for both new and used books the world has ever seen, and is also one of the most inscrutable. The retailer directly sells some books, while others are sold by third parties. The wild pricing happens with the latter.

Books were Amazon's first product. They made the company's reputation and powered Jeff Bezos' ascent to his perch as the world's richest person. Amazon sold books so cheaply that land-based shops could not compete. It controls about half the market for new books, more than any bookseller in the history of the United States. 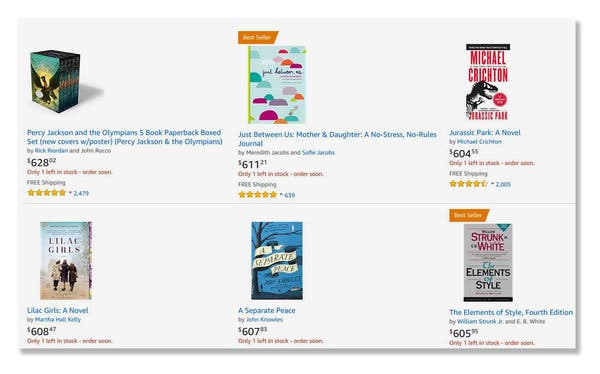 Prices of $600 or more are popular among booksellers looking for big spenders. "If I'm selling a $10 book for $610, all I need to do is get one person to buy it and I've made $600," said Peter Andrews of One Click Retail, a consulting firm.

But books are now a minuscule part of the company's revenue. Amazon is expanding into seemingly every field and geography, rattling competitors along the way. Prime Day, to be held on Monday, is a promotion that draws enormous media attention to discounted tech, gaming and other products. Meanwhile, the original bookstore is looking a little neglected, as if it were operated by algorithms with little sensible human input.

"Amazon is driving us insane with its willingness to allow third-party vendors to sell authors' books with zero oversight," said Vida Engstrand, director of communications for Kensington, which published "One Snowy Knight." "It's maddening and just plain wrong."

The wild book prices were in the remote corners of the Amazon bookstore that the retailer does not pay much attention to, said Guru Hariharan, chief executive of Boomerang Commerce, which develops artificial intelligence technology for retailers and brands.

Third-party sellers, he said, come in all shapes and sizes — from well-respected national brands that are trying to maintain some independence from Amazon to entrepreneurial individuals who use Amazon's marketplace as an arbitrage opportunity. These sellers list products they have access to, adjusting price and inventory to drive profits.

Then there are the wild pricing specialists, who sell both new and secondhand copies.

"By making these books appear scarce, they are trying to justify the exorbitant price that they have set," said Mr. Hariharan, who led a team responsible for 15,000 online sellers when he worked at Amazon a decade ago.

Amazon said in a statement that "we actively monitor and remove" offers that violate its policies and that examples shown it by The Times — including the hardcover version of the scholarly study "William T. Vollmann: A Critical Companion," which was featured for $3,204, more than 32 times the going price — were "in error, and have since been removed." It declined to detail what its policies were.

A decade ago, Elisabeth Petry wrote a tribute to her mother, the renowned novelist Ann Petry. "At Home Inside," published by the University of Mississippi Press, is now out of print, but late last week secondhand copies were for sale on Amazon. A discarded library copy was $1,900. One seller offered two copies, each for $1,967, although only one was described as "Nice!" All these were a bargain compared with the copy that cost $2,464.

"I wish I had some of that money," Ms. Petry said.

Buying books on Amazon can be confusing, because sometimes the exact same book can have more than one listing. For instance, a search for the Petry book turned up another listing. This time, there was just one copy for sale, which cost a mere $691. Whether a customer paid that price or three times that sum apparently depended on what listing he or she found.

"Let's be honest," said Peter Andrews, a former Amazon brand specialist who is manager of international client services at One Click Retail, a consulting firm. "If I'm selling a $10 book for $610, all I need to do is get one person to buy it and I've made $600. It's just a matter of setting prices and wishful thinking."

One of the sellers of Ms. Macgillivray's book is named Red Rhino, which says it is based in North Carolina. The bookseller's storefront on Amazon is curiously consistent. One of the first books on the store's first page was Anthony Bourdain's "Kitchen Confidential." It was priced at $607, a hundred times what it cost elsewhere on Amazon.

All the books on the first few pages of the storefront — including such popular standbys as "Fahrenheit 451," "The Very Hungry Caterpillar" and "1984" — also go for $600.

That appears to be a popular price point for booksellers taking the high road. Acme Books, which was selling the $691 Petry book, used that exact price for "101 Blessings for the Best Mom in the World" and quite a few other books.

Supersonic Truck recently marketed copies of "Kitchen Confidential" for $614, which is $608 more than what Amazon itself is asking. According to Amazon, Supersonic Truck has 100 percent positive ratings.

Red Rhino got nearly 1,400 customer-service reviews over the last year — an impressive number, considering many customers do not bother posting reviews. The reviews are 91 percent positive, although some of the reviewers appeared uncertain just what a book is. "The book is intact, and it is not broken," wrote one. Commented another: "Very nice. Flexibility noted in many venues."

Neither Acme nor Red Rhino returned emails for comment sent through their Amazon pages. As with many Amazon booksellers, it is hard to determine what, if any, existence they have outside the retailer.

Even a casual browse through the virtual corridors of Amazon reveals an increasingly bizarre bazaar where the quaint policies of physical bookstores — the stuff no one wants is piled on a cart outside for a buck a volume — are upended. John Sladek, who wrote perceptive science fiction about robotics and artificial intelligence, predicted in a 1975 story that computers might start making compelling but false connections:

If you're trying to reserve a seat on the plane to Seville, you'd get a seat at the opera instead. While the person who wants the opera seat is really just making an appointment with a barber, whose customer is just then talking to the box-office of "Hair," or maybe making a hairline reservation ...

Mr. Sladek, who died in 2000, is little read now, which naturally means his books are often marketed for inordinate sums on Amazon. One of his mystery novels, "Invisible Green," has a Red Rhino "buy box" — Amazon's preferred deal — offering it for $664.

That is a real bargain compared with what a bookseller with the improbable name Supersonic Truck is asking: $1,942. (Copies from other booksellers are as little as $30.) Supersonic Truck, which Amazon says has 100 percent positive ratings, did not respond to a message seeking comment.

Ms. Macgillivray, who has published eight novels, said she had been poking around Amazon's bookstore and was more perplexed than ever by the pricing.

"There's nothing illegal about someone listing an item for sale at whatever the market will bear, even if they don't have the book but plan to buy it when someone orders it," she said. "At the same time, I would think Amazon wouldn't want their platform used for less than honorable practices."

Since Ms. Macgillivray tweeted about "One Snowy Knight," the price on Amazon has not stood still. The most expensive copy just jumped again, to $2,800.