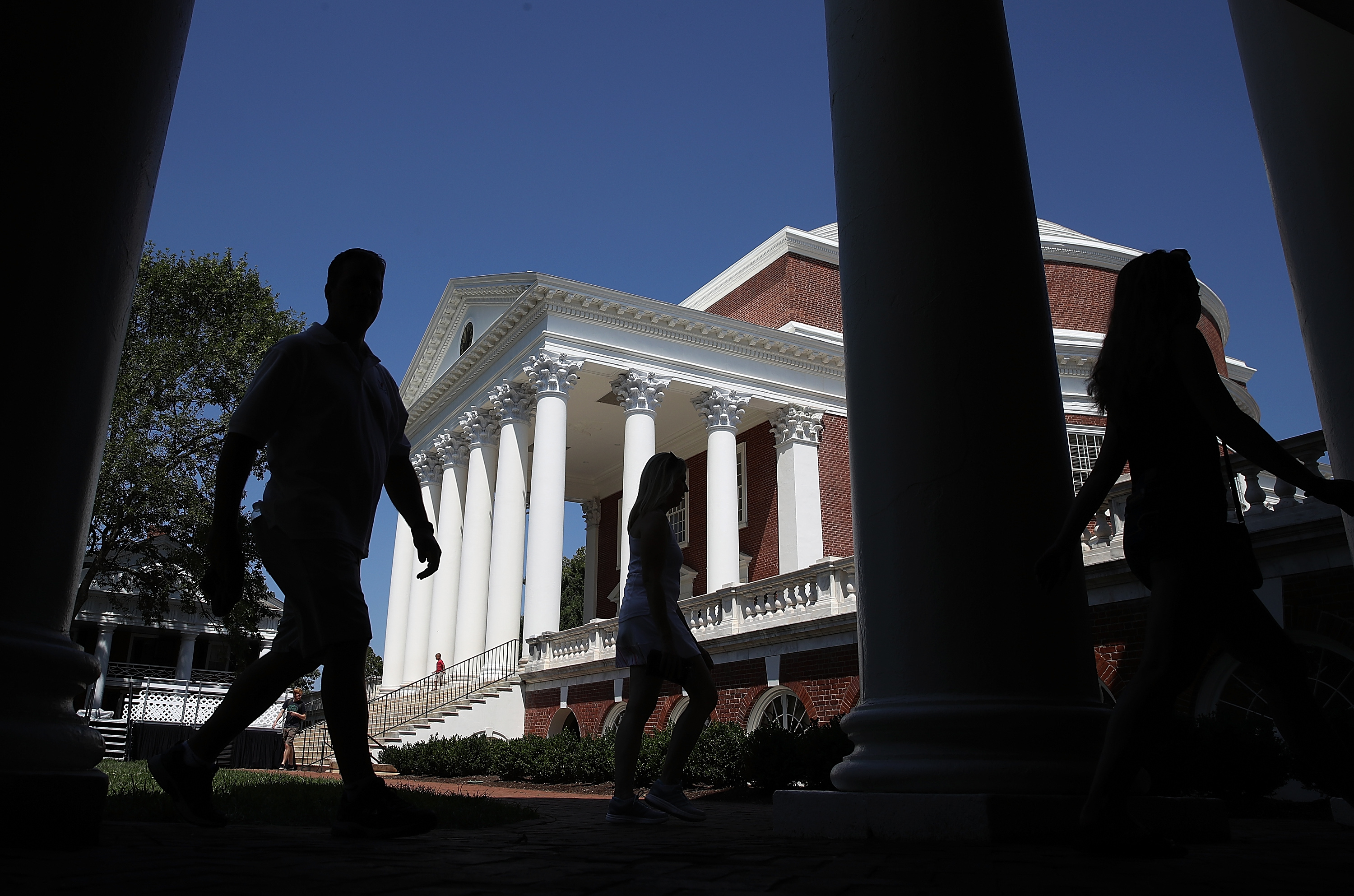 The University of Virginia in Charlottesville in August 2017. (Win McNamee/Getty Images)

Politicians in both parties say getting a higher education is not only the ticket to the middle class but also that it is vital to America's future prosperity. Yet they've created a system that prices college out of reach and forces children to take on growing levels of debt to pay the fare. That debt too often becomes a millstone on the young people it was intended to assist.

Student debt now totals about $1.5 trillion, more than credit card and auto loan debt. About 4 in 10 people who have attended college have taken out loans to help pay for it. These are the children of working- and middle-class families, not the affluent. As the price of college has skyrocketed nearly 400 percent over the past 30 years, the debt burden of those who take out loans has soared as well. The College Board reports that, in 2016, the average debt for those who took out loans to finish a bachelor's degree was $28,400 — an inflation-adjusted increase of about 30 percent since 2001.

The onerous debts sabotage the ability of a college education to serve as an instrument of upward mobility for disadvantaged groups. The students from the poorest families are forced to take on the highest amount of debt. Women hold about two-thirds of all student loan debt in the United States, and since they still earn less than men make for comparable work, women pay their loans off more slowly, incurring higher interest payments. African Americans who tend to start off with fewer family resources fare worse than whites. And those with a larger debt burden often can't begin saving for retirement or afford to buy a home, and they increasingly put off decisions about marriage and children.

The millennial generation has taken the hardest hit. About 75 percent have some form of debt, according to a recent survey. As a result, they save less than previous generations: Around 25 percent have no personal savings. Two-thirds say they would have difficulty paying an unexpected bill of $1,000. More than one-third say debt has forced them to put off buying a home, while 30 percent say they have put off saving for retirement, and 16 percent say they have put off having children. This comes at a time when some 94 percent of the new jobs created in the "recovery" are precarious — part time, short-term, on demand. This is a recipe for calamity.

Not surprisingly, a growing percentage of borrowers — now about 1 in 5 — are "severely behind" on their payments, incurring penalties and interest charges and hurting their credit. We are condemning those who tried the hardest to carry the largest burdens.

And it isn't just millennials who are troubled. AARP, the nation's largest seniors lobby, warns that the fastest-growing category of student-loan debtors are older than 60, with soaring numbers of retirees having their Social Security payment garnished to pay for student loans — mostly loans they took out for their children, but sometimes for themselves.

The reason for the debt crisis is clear: The cost of college has exploded in recent decades while median household-income growth has been relatively flat. Part of the cost increase is because state funding didn't keep up with rising costs, so students and parents are expected to bear more of the expense. A big reason, though, is the obscene growth in administrative salaries and staffing at public colleges and universities, even as more and more of the teaching is done by impoverished adjuncts.

The debt burdens not only the debtors but also the entire economy by dampening consumer demand. The federal government guarantees more than 90 percent of all outstanding student debt. A recent paper by Scott Fullwiler, Stephanie Kelton, Catherine Ruetschlin and Marshall Steinbaum of the Levy Economics Institute found that if the government canceled the debt it owns and bought out the remaining private creditors, it would increase gross domestic product by between $86 billion and $108 billion per year over the next decade, adding between 1.2 million and 1.5 million jobs.

More importantly, if combined with making all public universities tuition-free, this country would ensure that no young person is condemned to debt for pursuing the higher education or technical training that virtually everyone agrees is vital to this nation's future.

Does forgiving $1.5 trillion in student debt over 10 years cost too much money? Republicans clearly didn't think "$1.5 trillion" sounded unreasonable when they forced through that amount in tax cuts to overwhelmingly benefit corporations and the wealthiest Americans. Somehow, "conservatives" think we can afford to lard the pockets of the wealthy but can't rescue a generation drawn from working- and middle-class families burdened with education debts that many cannot afford to pay. That choice will surely not make America great again.