Your heart thumps, then catches. Your breath shortens. Beads of sweat emerge at your temples. Your eyes scan back and forth over the airplane-shaped diagram. Surely there must be at least one solitary aisle or window seat available. The world can't be so cruel as to wedge you into the middle.

But if Molon Labe Designs gets its way, that panic could give way to placidity. The upstart Colorado aviation design firm wants to kill the middle seat's middle child reputation. Its "stagger seat" concept sits slightly below and behind its neighbors, so it can be three inches wider than its window- and aisle-adjacent companions. It has its own armrests.

"Flying sucks, and design makes it suck less," says Hank Scott, the CEO of Molon Labe, who's currently in Germany to show off the prototype at the Aircraft Interiors Expo in Hamburg. (BMW Groups' Designworks and Panasonic Avionics also had a hand in the design.) By extending curved armrest back, the designers ensure the middle seater has access to at least half of its length. ("If you're in the aisle or window seat, you couldn't possibly steal the entire armrest—your elbows would be behind your back at a weird angle," Scott says.) That also gives the middle seat's in-flight entertainment system room to grow to a whopping 18 inches, compared to the puny 15-inch screens on other seat backs. For all this design prowess, however, this thing gets you nothing in extra legroom. 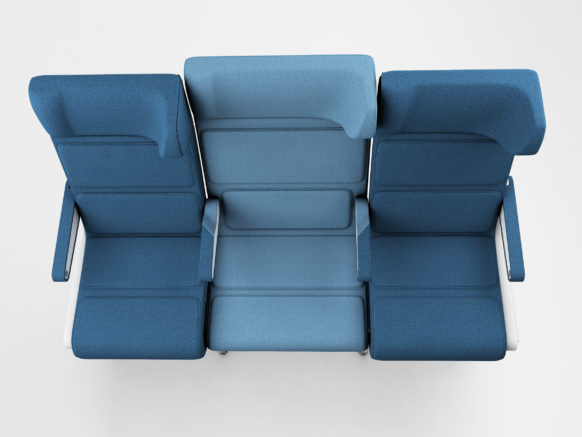 Even if it's not enough to make you crave the middle, anything that makes flying less miserable is welcome. And it could happen soon: Scott says he wants to get this thing on an actual airliner in two years or sooner, and that a few big airlines (which he declines to name) are interested. Normally, innovative aviation designs have to go through years of certification before climbing aboard a passenger jet. But Molon Labe has a little advantage.

Thanks to another concept in the works—that's the "Side-Slip Seat," a middle seat that folds into its partners for easier, quicker boarding on shorter plane trips—the blueprint for Big Government approval is pretty clear. The two concepts are based on the same framework, and the Side-Slip has passed in-house crash tests, including a trial to make sure flyers' heads won't get smashed up in the event of an emergency. Assuming those seats can perform the same way in front of the FAA, they could be in planes by the end of 2017, with the Stagger Seats no so far behind.

Now Molon Labe just has to find an airline willing to take a chance on cushier designs. Even as the price of fuel drops, big flying corporations have been loath to waste precious room on airplanes for anything but paying passenger butts. "You have to charge people to fly them through the air, because they're taking up weight and space in a cylindrical tube that's burning hydrocarbons," Richard Aboulafia, an aviation analyst with the Teal Group, told WIRED earlier this year.

And an uptick in passenger happiness might not be worth the extra weight of, say, an extra-wide seatback entertainment system.