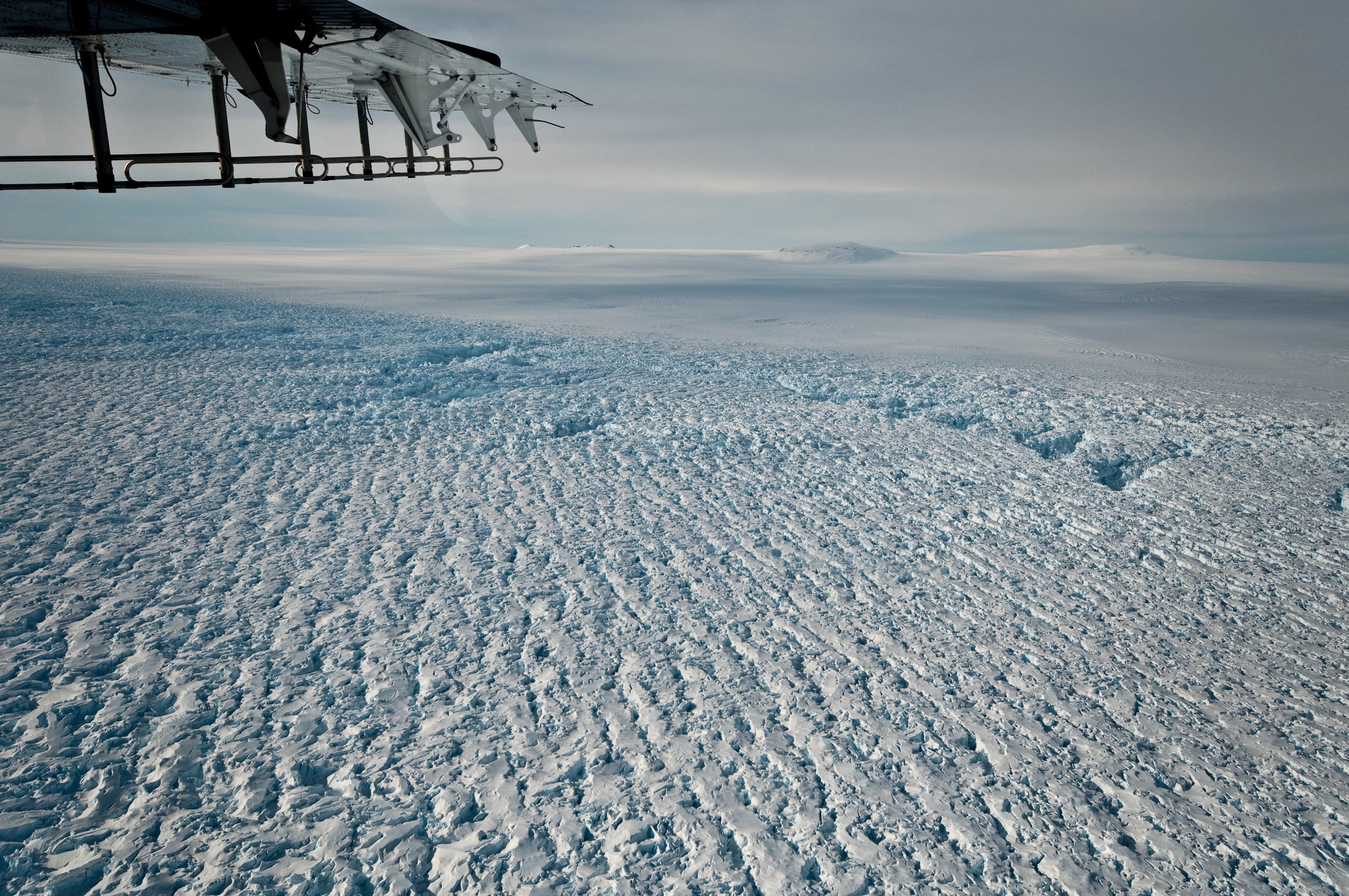 Crevasses near the grounding line of Pine Island Glacier, Antarctica. (Credit I. Joughin, University of Washington)

Antarctica's ice sheet is melting at rapidly increasing rate, now pouring more than 200 billion tons of ice into the ocean annually and raising sea levels a half millimeter every year, a team of 80 scientists reported Wednesday.

The melt rate has tripled in the past decade, the study concluded. If the acceleration continues, some of scientists' worst fears about rising oceans could be realized, leaving low-lying cities and communities with less time to prepare than they'd hoped.

The result also reinforces that nations have a short window — perhaps no more than a decade — to cut greenhouse gas emissions if they hope to avert some of the worst consequences of climate change.

The study is the product of a large group of Antarctic experts who collectively reviewed 24 recent measurements of Antarctic ice loss, reconciling their differences to produce the most definitive figures yet on changes in Antarctica. Their results — known formally as the "Ice Sheet Mass Balance Inter-comparison Exercise" (IMBIE) — were published Wednesday in the journal Nature.

"We took all the estimates across all the different techniques, and we got this consensus," said Isabella Velicogna, an Antarctic expert at the University of California, Irvine, and one of the many authors from institutions in 14 separate countries. The lead author was Andrew Shepherd of the University of Leeds in the U.K.

"The detailed record shows an acceleration, starting around 2002," said Beata Csatho, one of the study authors and a glaciologist at the State University of New York at Buffalo, in an email.

Csatho noted that comparing the first and last five year periods in the record reveals an even steeper acceleration. "Actually, if you compare 1997-2002 to 2012-2017, the increase is even larger, a factor of more than 5!!"

For the total period from 1992 through the present, the ice sheet has lost nearly 3 trillion tons of ice, equating to just under 8 millimeters of sea level rise. Forty percent of that loss has occurred in just the last 5 years, again underscoring the increase in losses recently.

Looking closer, the rapid, recent changes are almost entirely driven by the West Antarctic ice sheet, which scientists have long viewed as an Achilles' heel. It is known to be losing ice rapidly because it is being melted from below by warm ocean waters, a process that is rendering its largest glaciers unstable. 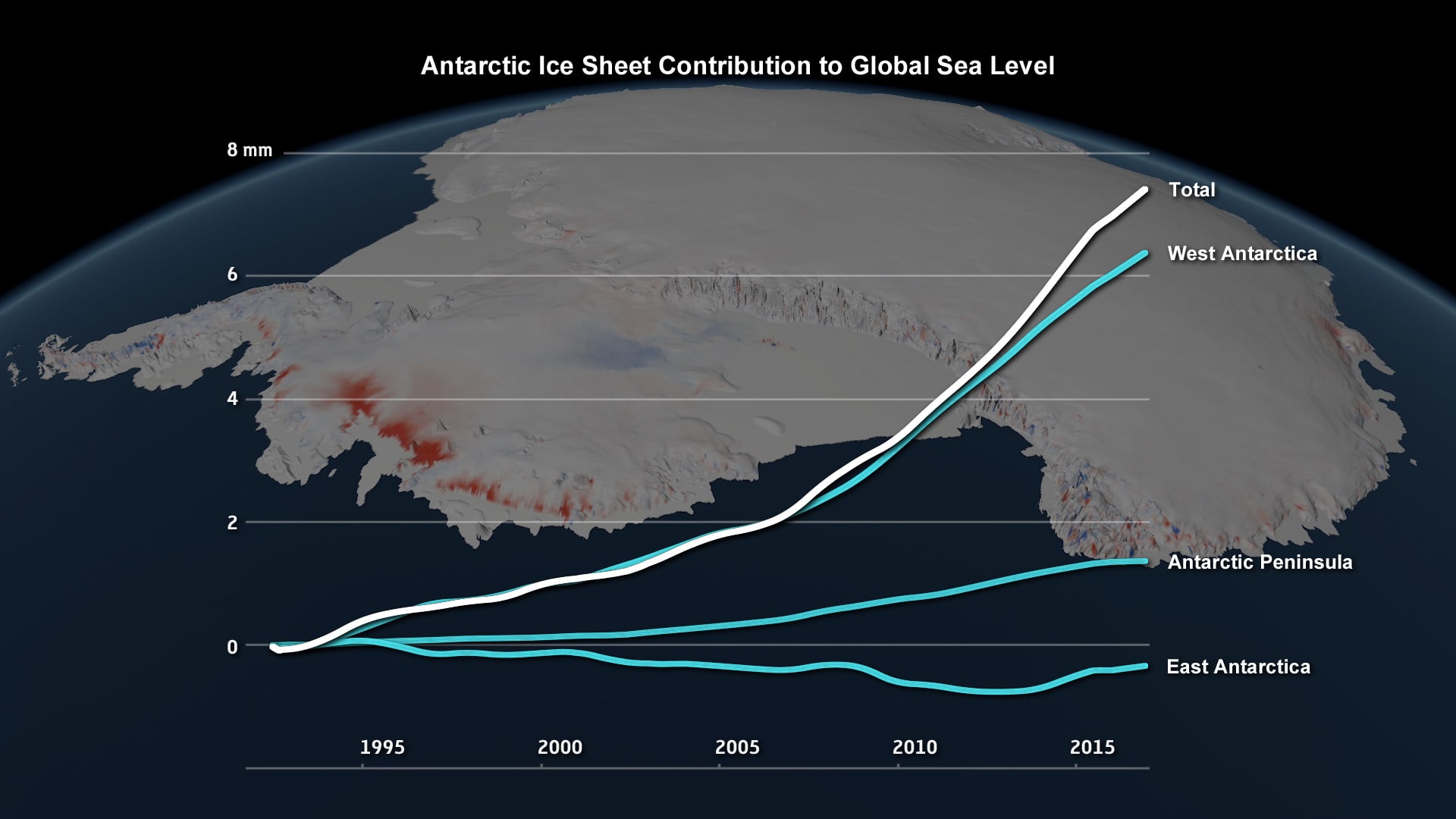 Sea level contribution due to the Antarctic ice sheet between 1992 and 2017. (Credit: imbie/Planetary Visions)

The growth is largely attributable to just two huge glaciers — Pine Island and Thwaites. The latter is increasingly being viewed as posing a potential planetary emergency, because of its enormous size and its role as a gateway that could allow the ocean to someday access the entirety of West Antarctica, turning the marine-based ice sheet into a new sea.

Pine Island is now losing about 45 billion tons per year, and Thwaites is losing 50 billion. Both numbers are higher than the annual losses for any other glacier anywhere in the world.

"The increasing mass loss that they're finding is really worrying, particularly looking at the West Antarctic, the area that's changing most rapidly and it's the area that we're most worried about, because it's below sea level," said Christine Dow, a glaciologist at the University of Waterloo in Canada who was not involved in the research.

"If you start removing mass from there, you can have a very large scale evacuation of ice into the ocean and significant sea level rise," she continued.

An additional increase in ice losses came from the smaller glaciers of the Antarctic Peninsula, which are also melting rapidly but contain less sea level rise potential.

Finally, the largest part of the continent, East Antarctica, has remained more stable and didn't contribute much ice to the ocean during the period of study, the assessment says. However, in the last five years, it too has begun to lose ice, perhaps as much as 28 billion tons per year, although the uncertainty surrounding this number remains high.

What's happening in East Antarctica is extremely important because it has by far the most ice to give, being capable of raising sea levels by well over 100 feet. A single East Antarctic glacier, Totten, has the potential to unleash as much total sea level rise as the entire West Antarctic ice sheet, or more.

"We cannot count on East Antarctica to be the quiet player, and we start to observe change there in some sectors that have potential and they're vulnerable," said Velicogna. 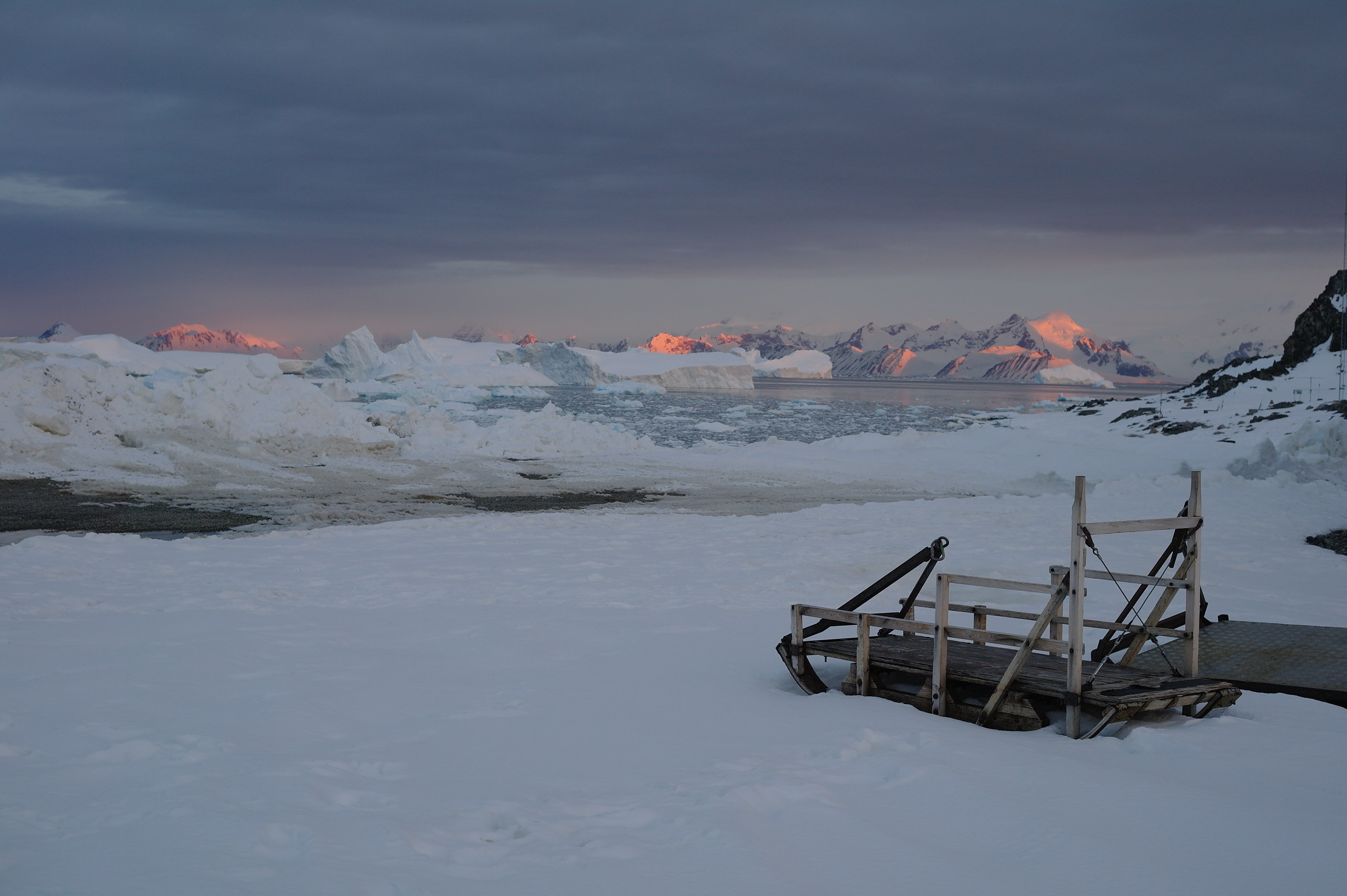 Scientists have previously raised fears about a scenario in which ice loss from Antarctica takes on a rate of explosive growth.

In a controversial 2016 study, former NASA scientist James Hansen and a team of colleagues (including Velicogna) found that the Earth could see sea level rise above 1 meter (or 3.3 feet) within 50 years if polar ice sheet loss doubles every ten years. A tripling every decade, were it to continue, would reach that volume of sea level rise even sooner.

Granted, there's no proof the current rate of change in Antarctica will continue. Scientists can't see the future, but they do fear continuing and even worsening losses.

"I don't know if it's going to keep exactly tripling, but I think it has a lot of potential to keep significantly increasing," said Velicogna.

The changes will not be steady, in any case, said Knut Christianson, an Antarctic researcher at the University of Washington in Seattle, by email. "We will not necessarily see solely rapid retreat," said Christianson, noting that as glaciers like Pine Island retreat backwards down a submarine, downhill slope, they will sometimes encounter bumps that slow down their movement. So we should expect "periods of stability interspersed with rapid retreat," he said.

Under high greenhouse gas emissions, the worst-case projections of sea level rise eventually reach over a centimeter each year, said Rob DeConto, an Antarctic expert at the University of Massachusetts, Amherst who was not involved in the current study.

We're nowhere near that point yet.

"We're still talking about roughly a half a millimeter per year," DeConto said. "That isn't going to sound horribly unmanageable. But remember for the northern hemisphere, for North America, the fact that the location in West Antarctica is where the action is amplifies that rate of sea level rise by up to an about additional 25 percent in a city like Boston or New York."

That's because as Antarctica's mass shrinks, the ice sheet's gravitational pull on the ocean relaxes somewhat, and the seas travel back across the globe to pile up far away — with U.S. coasts being one prime destination.

Whether Antarctic mass loss keeps worsening depends on choices made today, argues DeConto, who co-authored a separate paper in this week's Nature outlining two different visions for Antarctica's future in the year 2070.

Continuing high emissions could deliver massive sea level rise — but strong compliance with the Paris climate agreement, while unable to stop changes happening now, could help to control how much they worsen.

"The kinds of changes that we see today, if they were not to increase much more .... then maybe we're talking about something that is manageable for coastal stakeholders," said DeConto.

Or alternatively, he continued, Antarctica could drive faster changes, ones that "begin to exceed what we're going to be able to cope with."