The continent's rate of ice loss is speeding up, which is contributing even more to rising sea levels.

Between 60 and 90 percent of the world's fresh water is frozen in the ice sheets of Antarctica, a continent roughly the size of the United States and Mexico combined. If all that ice melted, it would be enough to raise the world's sea levels by roughly 200 feet.

While that won't happen overnight, Antarctica is indeed melting, and a study published Wednesday in the journal Nature shows that the melting is speeding up.

The rate at which Antarctica is losing ice has more than doubled since 2012, according to the latest available data. The continent is now melting so fast, scientists say, that it will contribute six inches (15 centimeters) to sea-level rise by 2100. That is at the upper end of what the Intergovernmental Panel on Climate Change has estimated Antarctica alone could contribute to sea level rise this century.

"Around Brooklyn you get flooding once a year or so, but if you raise sea level by 15 centimeters then that's going to happen 20 times a year," said Andrew Shepherd, a professor of earth observation at the University of Leeds and the lead author of the study.

Even under ordinary conditions, Antarctica's landscape is perpetually changing as icebergs calve, snow falls and ice melts on the surface, forming glacial sinkholes known as moulins. But what concerns scientists is the balance of how much snow and ice accumulates in a given year versus the amount that is lost.

Between 1992 and 2017, Antarctica shed three trillion tons of ice. This has led to an increase in sea levels of roughly three-tenths of an inch, which doesn't seem like much. But 40 percent of that increase came from the last five years of the study period, from 2012 to 2017, when the ice-loss rate accelerated by 165 percent.

Antarctica is not the only contributor to sea level rise. Greenland lost an estimated 1 trillion tons of ice between 2011 and 2014. And as oceans warm, their waters expand and occupy more space, also raising sea levels. The melting ice and warming waters have all been primarily driven by human emissions of greenhouse gases. 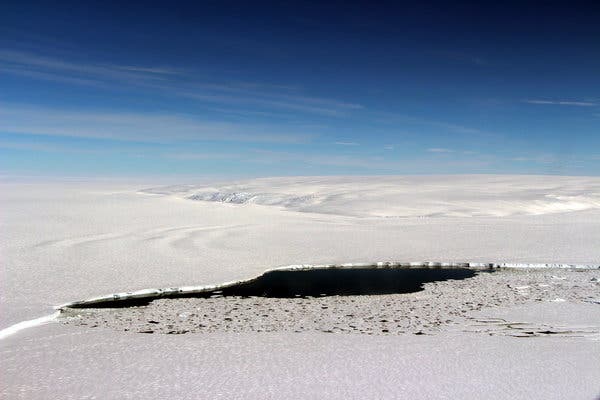 Sea ice and a small stretch of open water where the Venable Ice Shelf meets Farwell Island in Antarctica.CreditJohn Sonntag/NASA

The study also helps clear up some uncertainty that was linked to regional differences in Antarctica. West Antarctica and the Antarctic Peninsula, which reaches toward South America, have been known for some time to be losing ice. In East Antarctica the picture has been muddled as the ice sheet there gained mass in some years and lost mass in others.

East Antarctica has sometimes been a focus of attention for people who deny the science of global warming. "A lot of the argument has been made from stakeholders that are not quite as interested in dealing with climate change that the East Antarctic ice sheet is actually gaining mass — therefore we don't need to worry," said Michele Koppes, a glaciologist at the University of British Columbia who was not involved with the study.

East Antarctica, which makes up two-thirds of the continent, is a remote region of an already remote location, where data is scarcer because there are fewer measurement stations, Dr. Koppes said. Researchers must extrapolate a smaller amount of data over an area the size of the United States, which can make the analysis less precise.

To get around those problems in this study, more than 80 researchers from around the world collected data from about a dozen different satellite measurements dating to the early 1990s.

"We used different satellite missions and techniques because the various approaches we have at arriving at this number have different strengths and weaknesses," Dr. Shepherd said. "And we find that by combining all of the available measurements we can iron out the problems that individual techniques have."

The researchers concluded that the changes in East Antarctica were not nearly enough to make up for the rapid loss seen in West Antarctica and the Antarctic Peninsula. Antarctica is, on balance, losing its ice sheets and raising the world's sea levels.

Dr. Shepherd and his team ran similar calculations five years ago, using 20 years of data, but were unable to say much except that Antarctica seemed to be losing mass at a steady rate. They discovered the acceleration in the rate of ice loss when they did the calculations again for this study, this time with an additional five years of data.

"Now when we look again, we can see actually that the signal is very different to what we've seen before," Dr. Shepherd said. The rate of sea level rise due to Antarctic ice loss has tripled since 2012, he said.

Advancements in Earth-observing satellites have enabled researchers to better understand the polar regions. Many researchers once thought the polar regions would add ice as the climate warmed, because warmer temperatures lead to more moisture in the atmosphere, which leads to more rain, and, they thought, more snow at the poles. Direct observation from satellites upended that view.

The western edge of one of the largest icebergs ever recorded, which broke away from the Antarctic Peninsula last year.CreditNathan Kurtz/NASA

Researchers like Dr. Shepherd fear that future knowledge from satellites is at risk, however. Budgets proposed by the Trump administration have called for a reduction in some Earth observation programs.

"We depend upon the satellite measurements to not only tell us how the ice sheets respond but also to make these calculations to sea level contribution," Dr. Shepherd said.

The satellite observations also show what's driving the loss of ice in Antarctica. "This study shows that we're actually losing more mass along the edges of the ice sheet, where the ice sheet is making contact with the ocean, and that the warming oceans are melting the ice," Dr. Koppes said. "They're melting the ice at rates that far exceed anything that would change in the air, and these are forces that you can't reverse easily."

Kendra Pierre-Louis is a reporter on the climate team. Before joining The Times in 2017, she covered science and the environment for Popular Science. @kendrawrites