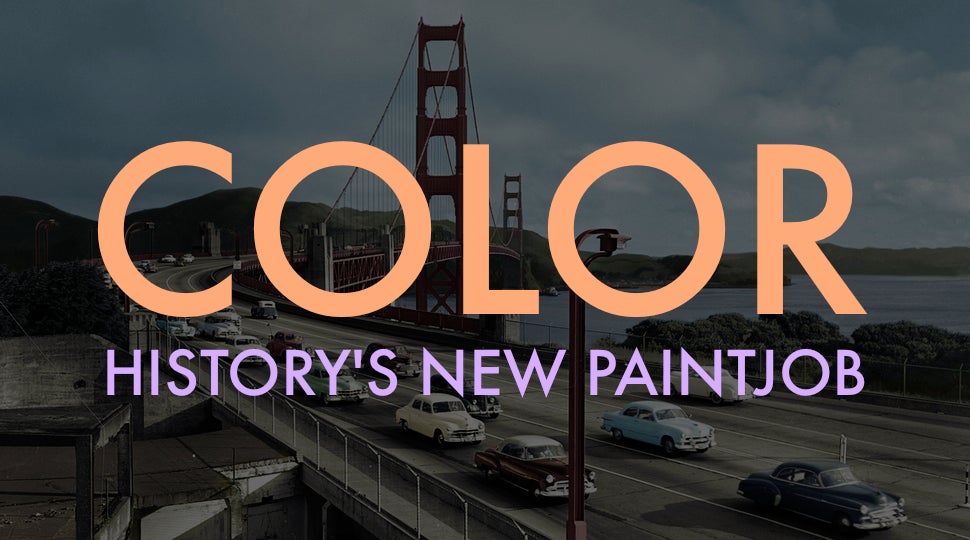 There's been an explosion in the number of colorized photos lately. People find old black-and-white photos online, and meticulously add color to give us a new perspective on history. But recently one colorized image caught my eye after it was tweeted by the notoriously inaccurate HistoryInPics. It's a stunningly colorful view of the Golden Gate Bridge in 1940. But the photo is a lie.

HistoryInPics scraped the image from Reddit user kibblenbits. But HistoryInPics never mentions that the photo has been colorized, nor who colorized it. The caption simply reads, "Golden Gate Bridge, 1940" leading us to believe that it's an "authentic" photo from 1940.

Here's where things get weirder. The photo isn't even from 1940, even though the Associated Press lists the original black-and-white photo as having been taken on November 20th of that year. Judging by the makes and models of the cars in the image, it's way off. As first spotted by commenters at The Atlantic, the photo is more recent by at least a decade.

I asked Jalopnik's own Jason Torchinsky, and he thinks that the photo must be from 1952 or later, given that the maroon car (or, at least the one that's maroon in the colorized photo) looks most like a 1952 Chevy Bel Air.

Jason even made an image to demonstrate this, explaining that you can kind of "make out the extra grille 'teeth' they added in 1952."

"The bumper guards were options that could have been on any of the years," Jason said. "I personally think it's a '52, but you could argue for '51."

Why does any of this matter? Putting aside the Associated Press's error in dating the photo for a moment, I think (and so far, I'm in the minority on this one) that there's a danger that the colorized photos could become more popular in search engine results than the black-and-white ones.

Take the images above, for example. The top image is a photo by Norman Seeff dating back to around 1985. The photo was recently colorized by Jordan J. Lloyd.

"WTF. I didn't even realize I was on /r/ColorizedHistory. Completely undetectable coloring," one commenter says about Lloyd's colorization of Jobs.

As Lloyd explains in the comments of his Reddit post, he agonized over the color of the sweater and other such details, as the best colorizers do. But who's to say what the color of that sweater really was? And what about the books on the shelf or the art on the wall?

Color images resonate with those of us who grew up during a period when color photography was the norm—and color was obviously commonplace in 1985! But Seeff, the original photographer, made the conscious choice to shoot this particular portrait in black-and-white. And what happens if this colorized version becomes more popular than the black-and-white version? Should we care? Does it matter at all to history?

"My only concern would be that nobody should see color versions as 'better' than black and white originals in any way," Alan Taylor at The Atlantic tells me. "They may seem more relatable, or tickle some part of the brain that itches to fill in the gaps left by monochrome images, but they are definitely alterations—not originals."

"If a colorized image can spark interest in history, great, I'd hope people would dig deep enough to learn about the challenges of early photography, and how some came to master and take full advantage of contrast and tone to aid in storytelling," Taylor said.

Errors happen, as we see with the AP's incorrect date for the Golden Gate Bridge image. But what happens when we start to tinker with old photos in such a way that we're inserting "errors" like the wrong color?

The colorized photo above originally comes from the Library of Congress and depicts ballet dancers in 1924. But Paul Edwards, the person who did the colorization, doesn't really know the original colors of what those women are wearing.

There's nothing new about photo colorization. Manual colorization is nearly as old as photography itself. But here in the early 21st century there does appear to be a desire to colorize all the old photos, now that the digital tools that make it easier are so commonplace.

As we've learned time and again, the internet is like that old kids' game of Telephone. And a particular image or fact can start with one person online and inevitably become more distorted as it gets further down the line. Errors are inserted—sometimes intentionally, sometimes by accident—until it winds up completely distorting our understanding of the original message.

The vast majority of photo colorizers probably don't have deception as a goal. But it seems important to have this discussion now. Especially since some of the largest popularizers of history online (I'm looking at you, @HistoryInPics) have a terrible track record when it comes to providing context for these old images. It's one thing to remember our history. It's another to remember it wrong.

Correction: This post mistakenly claimed that the Golden Gate photo had been colorized by Dana Keller. It was actually colorized by kibblenbits.

Images: Photo of the Golden Gate Bridge via the Associated Press with an as-yet undetermined date, colorized by kibblenbits; Black-and-white photo of Steve Jobs circa 1985 by Norman Seeff, colorized by Jordan J. Lloyd; Dancers of the National American Ballet on August 20, 1924 via Library of Congress, colorized by Paul Edwards; Nikola Tesla photo circa 1894, colorized by Dana Keller

The internet can be a tough place to distinguish fact from fiction. Who has time to fact-check all those beautiful, weird, and sometimes horrifying… Read more

Over at The Atlantic, Alexis Madrigal has uncovered the two people behind the enormously popular (and often factually inaccurate) Twitter account… Read more