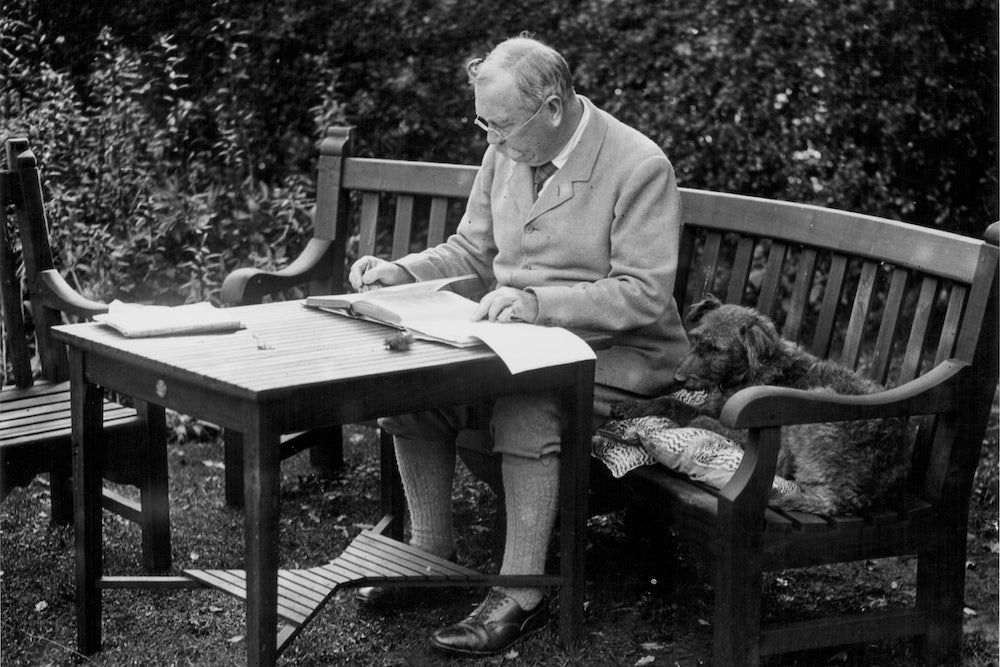 William Roughead wasn't the kind of writer who liked to
indulge in outrage. The Glasgow lawyer, who began attending murder trials in
1889 at the age of 19—for curiosity's sake until it became his professional
avocation—much preferred to write about crime in a dry, droll manner. The cases
he covered, with notable defendants such as Madeleine Smith, Constance Kent,
and Katherine Nairn, were colorful enough to speak for themselves, the evidence
substantive enough for readers to reach their own conclusions. Over six decades
writing about the most notable criminal proceedings in Britain (the best of
these essays are collected in Classic Crimes), Roughead did not need to
juice his style with the seeds of anger. That's why so many, myself included,
regard him as the dean of the modern true crime genre. 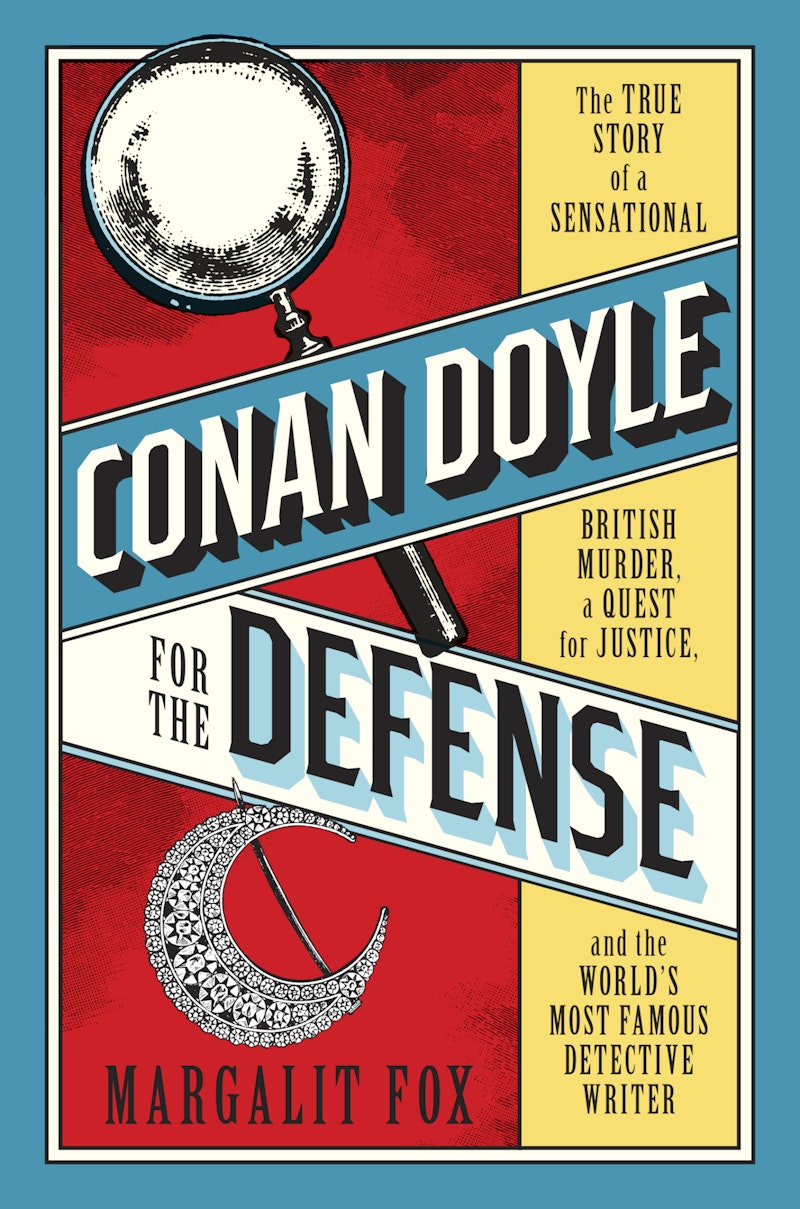 CONAN DOYLE FOR THE DEFENSE: THE TRUE STORY OF A SENSATIONAL BRITISH MURDER, A QUEST FOR JUSTICE, AND THE WORLD'S MOST FAMOUS DETECTIVE WRITER by Margalit FoxRandom House, 352 pp., $27.00

But the Oscar Slater case was different. Roughead not only
attended the trial of Oscar Slater in Glasgow in May 1909, writing it up for
the Notable Scottish Trials series, but he also believed that the guilty
verdict, arrived at after barely an hour of deliberation, was wrong. There was,
in Roughead's estimation, no evidence that Slater, a German Jewish immigrant,
was even in Glasgow when Marion Gilchrist, a wealthy woman in her 80s,
was robbed and bludgeoned to death in her apartment. And the main witnesses,
notably Gilchrist's maid Helen Lambie and a neighbor, Mary Barrowman, kept
changing their stories. Even when Slater's original death sentence was commuted
to life imprisonment, Roughead's outrage did not subside.

Roughead broadcast his disbelief in Slater's guilt from the
first, to anyone who would listen, enjoining the most famous detective fiction
writer in the world, Sir Arthur Conan Doyle, in his cause. The case transformed
Roughead from observer to participant. He even testified at a hearing, nearly
20 years after the original trial, to determine Slater's ultimate fate: Would
the man stay in Peterhead Prison for a crime he did not commit, or would he
finally be freed? Years after that verdict came in, Roughead wrote a
fresh essay—his fourth—on the affair in 1935. He was not shy about casting
blame for the cascade of injustices that bedeviled Slater, nor did he hesitate
to give credit where it was due. For Conan Doyle's advocacy of Slater, Roughead
called him a "paladin of lost causes and champion of forlorn hopes."

Slater's plight foreshadows so many future wrongful
conviction stories, in which belief that the system will ultimately work is
shattered by its cruel unfairness, its sacrifice of innocent defendants at the
altar of wins and losses. The case never quite fell out of cultural
consciousness—certainly not in Britain, and Scotland in particular, where the
sustained outcry led to criminal justice reforms, including the institution of
a proper appeals court. This year, his story has been having something of a
revival, with a BBC radio documentary by crime writer Denise Mina and
Margalit Fox's splendid new book Conan Doyle For the Defense. How, both
ask, despite the flimsiest of circumstantial evidence, was Slater so obviously
and badly railroaded? And how did the very people who set out to defend Slater
end up turning against him?

Conan Doyle For the Defense cannot resist structuring itself as a detective
novel, though the whodunit is less about who killed Marion Gilchrist and more
about who framed Oscar Slater. The ingredients are too good to pass up: a
famous detective novelist actually playing detective, a man serving time for a
murder he did not commit, and a criminal justice system slowly, and
reluctantly, reckoning with the advent of forensic science—fingerprints were
around when Slater was arrested and convicted, but in one of so many missed
opportunities to right the wrong, never used.

As both Mina and Fox observe, Slater's case played out like
the Dreyfus Affair, which a decade earlier had seen a French army officer
wrongfully convicted of treason. Slater, like Alfred Dreyfus, was Jewish, and
thus "other" in protestant-dominated British culture. Slater did not speak
English well, his heavy German accent frequently garbling words and making him
misunderstood. He was married, but consorted with sex workers, had a criminal
record, and made his money as a professional gambler. Slater also owned a small
hammer, a weapon sometimes necessary in his line of work. He traveled under
assumed names. One of these names—Anderson—got him in trouble: It was the name
on the pawn shop ticket for a brooch that turned out to have been stolen from
Marion Gilchrist's apartments. This was the first seed in the false narrative
that undid him.

The second seed was the then-current vogue in criminal
investigation: pseudoscientific identification methods devised by Cesare
Lambroso and Alphonse Bertillon. Police detectives eagerly adopted these
methods, which linked criminality to specific physical traits like the shape of
a person's head or the size of his nose. That these methods were backed by
little scientific evidence hardly mattered. They also often led to the arrests
of people from certain ethnic groups, or those who fit certain stereotypes. Because
Slater was deemed "undesirable", with his foreign accent, his Jewish background, his dissolute
lifestyle, and since murder was the domain of "undesirables", police deduced
that Slater must have done it—"preposterous reasoning," Fox observes, that led
to "to the detriment of justice." Meanwhile, fingerprinting—a solid, scientifically
backed technique—was never employed in the Slater case, a true "what might have
been" if there ever was one.

If Slater was akin to Dreyfus, then Arthur Conan Doyle ended
up as Emile Zola, who helped bring about Dreyfus's release with his 1898 open
letter, J'Accuse! There was much in the prosecution's case for the
detective novelist to find fault with, as he first outlined in The Case for
Oscar Slater (1912). Slater's hammer, he pointed out, was too small to be a
murder weapon. He used assumed names to hide from his wife, not from police. He
was nowhere near the crime scene, no matter how hard police tried to place
Slater there. And the jury verdict—nine finding guilty, five "Not Proven", and
two innocent—wouldn't have been enough to convict him in England, where jury
verdicts have to be unanimous.

At first, Conan Doyle's crusading efforts went nowhere. After
a 1914 inquiry upheld Slater's conviction, despite concerns lodged by a police
detective, Conan Doyle raged: "How the verdict could be that there was no fresh
cause for reversing the conviction is incomprehensible. The whole case will, in
my opinion, remain immortal in the classics of crime as the supreme example of
official incompetence and obstinacy." He would work on the case off-and-on, in
between writing novels and going deep into a Spiritualism phase, until 1925,
when Slater smuggled a handwritten plea for help to Conan Doyle via a
newly-released prisoner.

There wasn't any fresh evidence or new revelation. He just
wanted someone—especially someone with as much renown as Arthur Conan Doyle,
who had advocated for him a decade before, but seemed to have moved on—to stand
up for him. The next two years would prove pivotal. A book by the journalist
William Park, The Truth About Oscar Slater (written with Conan Doyle's
emotional and financial support and published in March 1927) uncovered further
instances of fabrication by law enforcement: the original search warrant on
Slater, Park revealed, had actually been obtained under false pretenses. Park's
book finally seemed to wake Scotland up to Slater's plight, and when he faced
another hearing—with Conan Doyle, Roughead, and Park all in attendance or
giving testimony—it led, at last, to his release.

Conan Doyle For the Defense is most successful when it loosens
itself from conventional mystery plotting and focuses more on the principals
and their emotional states. Slater, in his letters from prison to family
members he will hardly see for the next two decades, emerges in all his
complexity, his personality ranging from even-tempered to outright despair.
"You write me in your letters that there is no wonder if I have lost interest
in you," he wrote to his sister, Malchen, late in his imprisonment. "I can only
lose interest in you when I cease to exist." And to a family friend in 1910: "I
am a broken and a ruined man and will—so long as I live—make every endeavor—so
far as possible—to free my family from this awful shame."

Conan Doyle, by contrast, is fueled by principle, his outrage
stoked when court decisions do not go Slater's way or when the public seems
largely uninterested in the case, and then elated when, at last, the Scottish
government finally nullifies Slater's conviction. "Who can restore the vanished
years?" Conan Doyle wrote in a thunderous essay introducing Park's book. "It
is indeed a lamentable story of official blundering from start to finish."

For a man wrongfully convicted and for a detective novelist,
Slater's release should have been a perfect ending. It was no such thing. Once
Slater was freed from Glasgow prison in 1928, he faced narrowed prospects. The
"Slater" name, and its associated infamy, slammed doors on professional
opportunities and brought back painful memories, so he reverted back to his
birth name of Leschziner. Not only was the real murderer never properly
identified, but the relationship between Slater and Conan Doyle devolved into
something ugly: By the time Conan Doyle died, in 1930, Slater and he were
estranged. Worse, the estrangement had its roots in a dispute over money. The
Scottish government gave Slater six thousand pounds in compensation when he was
released; Slater took the money, since he had none at the time, but didn't
realize that Conan Doyle expected to be paid for his considerable time and
expense in aiding Slater's defense.

Slater's understandable need for a short-term need for money
clashed with Conan Doyle's "deep, abiding principle" that "absolute probity in
fiscal matters…was one of the canonical imperatives of the upright life."
There was no ironclad agreement between the two men that Conan Doyle would be
paid, only an assumption on his part. Their relationship unraveled, with Conan
Doyle going so far as to attack Slater by letter: "You seem to have taken leave
of your senses. If you are indeed responsible for your actions, then you are
the most ungrateful as well as the most foolish person whom I have ever known."
The two men went to court over who was entitled to the six thousand pounds, ultimately
settling for a mere 250 pounds only months before the detective writer died in
July 1930.

As Fox notes, reading their "increasingly vitriolic" letters,
Conan Doyle treated Slater "more as an archetype than an individual."
Slater, the cause, the avatar for justice denied, was worth every fight,
whereas Slater, the "disreputable, rolling-stone of a man," proved a deep
disappointment. To some credit, Conan Doyle understood that "eighteen years of
unjust imprisonment" had left its mark on Slater. But what he did not fully
grok was that Slater deserved to be treated as a real and complex person, not a
one-dimensional character. Conan Doyle had dwelt so long in the land of
Sherlock Holmes stories, where ingenious reasoning led to audacious solutions,
that he could not see how Slater defied traditional narrative—and that he was
far messier than any fictional character of Conan Doyle's devising.