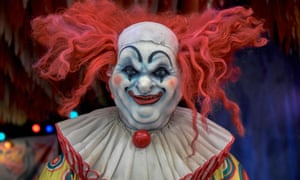 A wave of hysteria about sightings of 'scary clowns' has swept the US and several European countries.
Photograph: Alamy Stock Photo

A man in southern Sweden has been stabbed by an unidentified attacker wearing a clown mask, police say.

"A man born in 1997 was stabbed in the shoulder by an unknown person who ran away," police in Halland county said on their website.

The attack comes as a wave of hysteria about sightings of "scary clowns" sweeps the United States and several European countries, including the UK.

The Halland county incident was not the first involving clowns in Sweden. In the centre of the Scandinavian country on Wednesday two people in clown costumes threatened to kill a woman.

"She was extremely frightened," a police spokesman told the Aftonbladet newspaper, adding that there was nothing funny about the craze.

Also on Wednesday, a group of men in clown outfits surrounded four 10-year-old children and threatened them with what turned out to be fake chainsaws.

The interior minister, Anders Ygeman, has called for calm.

"We don't want to see a situation where a person gets into real trouble because someone, perhaps half-joking, puts on a clown mask," Ygeman told the TT news agency.

In the US, a social media-fuelled frenzy led the McDonald's hamburger chain to announce this week it would scale back the use of its smiley-faced Ronald McDonald.