On Friday, Treasury Secretary Steve Mnuchin said he's "not worried at all" about artificial intelligence replacing human workers because it's "50-100 more years" off. In reality, data shows this is already happening — with an estimated 38 percent of existing U.S. jobs at risk of being turned over to machines by 2030, according research from PwC. Another study put out by the University of Oxford last year had similar estimates: The researchers found that 47 percent of US jobs were at risk of automation in the next two decades.

But despite justified fears of obsolescence in the West, it is actually developing economies that are poised to be hit the hardest by fourth Industrial Revolution, or "Industry 4.0," where machines are networked together in "smart factories" that have little need for human input.

This is already evident in China, where the domestic economy exploded in the last two decades thanks to Western companies that moved their manufacturing operations there. These same factories are now turning to intelligent machines as replacements for human labor. Take, for instance, an electronics factory in Shanghai that has already replaced two-thirds of its human workforce, and plans to become 90 percent automated in the coming years. Or the Foxconn factory that manufactures electronics for companies like Apple, which recently replaced 60,000 workers with robots in a single factory. And these examples are far from anecdotal. China already purchases far more industrial robots than any other country, and by next year will have outpaced the two leading manufacturing nations — the United States and Germany — in terms of the number of industrial robots used in the country.

At a time when manufacturing employment is disappearing across the globe, the fear is that the industrial internet and its automated manufacturing army will lead to mass unemployment. Considering that China accounts for about a quarter of global manufacturing output and employs well over 100 million people in the manufacturing sector, such fears are not unfounded. 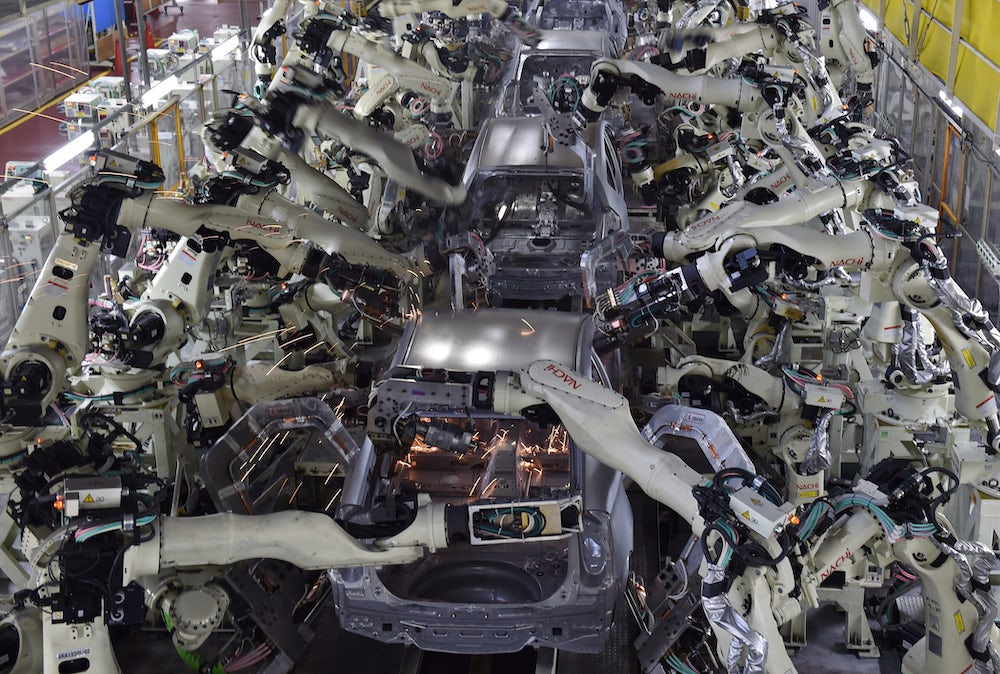 A World Bank report found that two-thirds of all jobs in the developing world face being automated out of existence, although the rate that this will happen is uncertain and "depends on the the pace of technological disruption." Moreover, despite Western fears of the coming robo-apocalypse, the report also notes that the "share of occupations that could experience significant automation is actually higher in developing countries than in more advanced ones, where many of these jobs have already disappeared."

The question is, assuming that this trend toward the networked automation of factories continues — and there is little evidence to suggest that it won't — what happens next?

While there is no perfect analog, there is a precedent to consider here. Beginning in the 1980s, manufacturers in the United States and Western Europe began to relocate their factories overseas in search of cheaper labor. The effects of offshoring were immediately apparent in terms of manufacturing employment, which dropped severely in the United States between 1980 and today. Economists refer to this process as deindustrialization, which is a way of describing a country's transition from a manufacturing to a service-based economy.

For developed countries, industrialization was the path to wealth. Research has shown that as incomes rise, the demand for goods rise less relative to demand for services. In other words, deindustrialization and the transition to a service economy seemed like a natural result of a fully industrialized country.

But if the process of deindustrialization began as arbitrage, where a handful of mature industrial economies in the United States and Western Europe deindustrialized by sending manufacturing abroad in search of cheaper labor, it's now driven by technological advancements. Instead of moving elsewhere, manufacturers are opting to stay in Asia to focus on the burgeoning national economies in the region, which means that deindustrialization in these countries is fueled not by reshoring but by the rise of the automated, networked factory.

The problem is that, whereas countries like the United States had the opportunity to become fully industrialized (read: wealthy) before the process of deindustrialization began, developing industrial economies like China never had a chance to reach maturity before deindustrializing. As Harvard economist Dani Rodrik noted in a recent article for The New York Times, the onset of premature deindustrialization in the developing world means that income for these workers has peaked at far lower levels than in the United States and Western Europe before the transition to a service economy began. In other words, wages topped out too low for the citizens of developing countries to turn them into the consuming force that is necessary to sustain the ramped-up production enabled by the fourth industrial revolution.

Moreover, the nature of the service economy is itself changing and can no longer be seen as a safe and reliable alternative to manufacturing work, thanks to the "Uberization" of an increasing number of services.

"Phenomena such as Uber have a very strong impact on the service sector," Jörg Mayer, senior economist at the UN Trade and Development Conference, told The Outline. "They will not have a positive effect on the creation of jobs, certainly not on the level of wages."

"What you find in sectors where you have Uberization is very precarious engagement—you have to be on call and you're only paid for the time you actually work and the wages are very low, and then there's issues of social insurance, unemployment insurance, and so on," he added. And that doesn't account for Uber's plans to eventually replace is drivers with self-driving cars.

How this process will play out in the long term is still quite uncertain, largely due to the relative novelty of Industry 4.0 — there simply isn't enough data available yet to get a clear picture of how networked robots are affecting manufacturing employment. Some point to China's growing manufacturing workforce as a counterpoint to those forecasting a robo-apocalypse in the country's manufacturing sector. 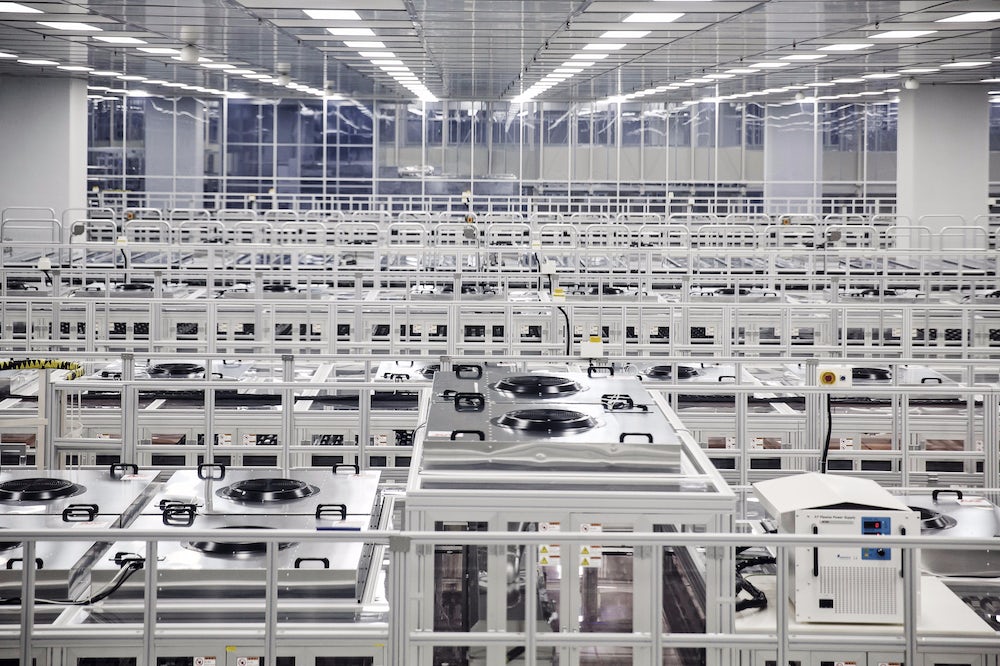 Moreover, the fourth industrial revolution will also create some new jobs. Unfortunately, these new jobs won't be enough to offset the number of low-skilled jobs lost to automation and will be pooled in the high-skilled sector.

In the absence of a heavy tax on robots, the report notes, "developing countries should embrace the digital revolution" by "redesigning education systems to create the managerial and labor skills needed to operate new technologies."

"The digital economy enables the provision of services that didn't exist before," Mayer said, citing how cell phones have allowed those in rural areas to have access to banking or education services. "If you look at the effect of the digital revolution on the provision of services in the developing world, there is a strong positive effect. One always hears about adverse employment effect in the services sector through the digital revolution, but this evidence is in the advanced economies, where you actually have these services."

"One has to be careful to simply transfer evidence that is undoubtedly there for advanced economies onto the developing countries," he added.

Yet many economists aren't quite as optimistic. Aside from the gloomy forecasts of the UN Trade and Development Conference Report, the 2015 World Economic Forum meeting was also focused on Industry 4.0 and its discontents. According to one of the Davos reports, the fourth industrial revolution will destroy some 5 million (mostly white-collar) jobs in 15 industrialized and developing countries by 2020. But for Davos attendees like German chancellor Angela Merkel, noted evangelist of Industry 4.0, this was not a good reason to reconsider networking the world's factories. Rather, those previously employed in manufacturing would simply have to accept the unspoken mantra of the fourth industrial revolution: adapt or perish. 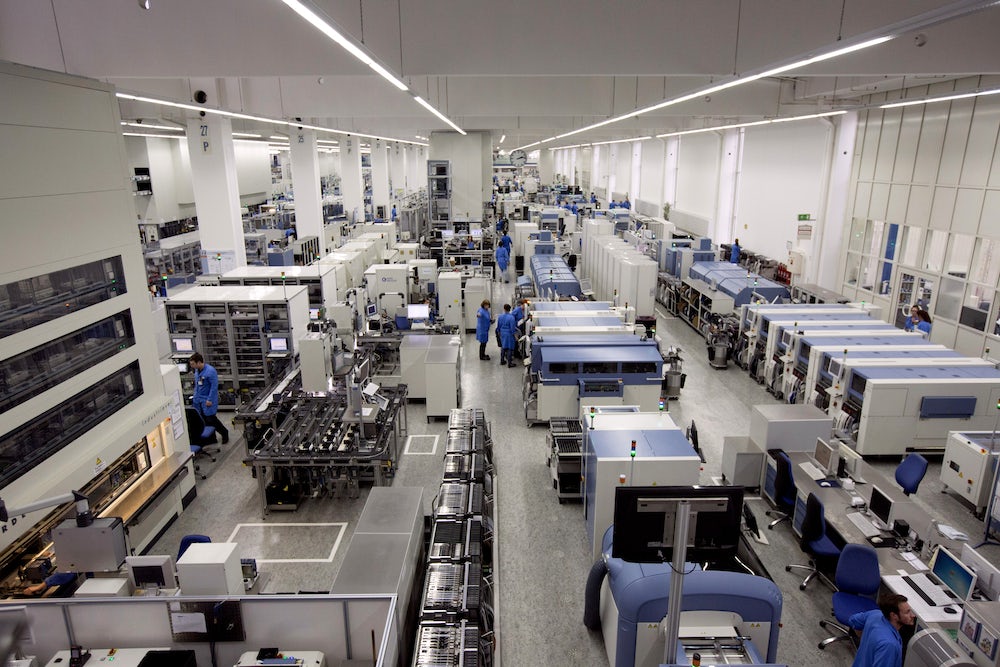 Of course, some will argue that this has always been the case, from the first three industrial revolutions — defined by the creation of the factory in the late 18th century, the assembly line in the early 20th century, and increasing factory automation beginning in the 1980s — to the networked factory of industry 4.0. But never before have machines threatened to render two-thirds of the jobs in the developing world (which accounts for some two-thirds of the globe, depending on how you measure) obsolete.

Coupled with similarly bleak projections in developed countries, the rise of Industry 4.0 begins to look less like a paradigm shift and more like a paradigm collapse. But whether this robot utopia will lead to the life without work we've always been promised, or some post-industrial hell that makes Black Mirror seem like a comedy, remains, in the cautiously optimistic words of the UN report, "an open question."