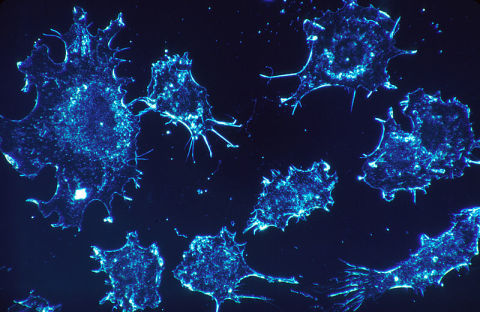 Humans want to believe we control our own destinies. If we exercise for 30 minutes every day, eat healthy, avoid cigarettes, alcohol, and drugs, meditate, and participate in the health trend du jour, it seems logical that we will live longer, be happier, and avoid diseases like cancer. Unfortunately, it seems fate is more chaotic than that. A new study published in Science suggests that most cancers are unavoidable. They're caused more often by bad luck than anything else.

Mutation, which drives cancer, is actually totally normal. In fact, its the engine of evolution–if not for mutation, our genes wouldn't make the random changes that once in a while end up giving us a new, important skill–like making enzymes that break down lactose, or resistance to disease. But often, those mutations get out of control. Cells divide and divide until they overpower the useful cells in our body and kill us. That's what cancer is.

According to Bert Vogelstein and Cristian Tomasetti at the Johns Hopkins Kimmel Cancer Center, many of these cancers are unavoidable. They're just part of nature.

"We all agree that 40 percent of cancers are preventable," Vogelstein said at a press conference. "The question is, what about the other cancers that aren't known to be preventable?"

Vogelstein explained that each time a cell's DNA is copied, mistakes are made. Most of these mistakes are harmless, and as noted above, some of them can even be beneficial. "But occasionally they occur in a cancer driver gene. That's bad luck," Vogelstein says. Several of these bad-luck mistakes can add up to a cancerous cell.

Their study sets out to determine how often these mistakes are preventable–whether by not smoking or maintaining a healthy weight–how often they are genetic, and how often they occur by chance. The answer may surprise people who have spent decades believing they can control the development of cancer in their bodies. According to the paper, 66% of cancerous mutations are random, 29% are preventable, and only 5% are genetic.

The numbers vary depending on the type of cancer. Lung cancer is indeed usually caused by cigarette smoke, while childhood cancer is often random. The authors hope that these statistics will help some parents feel less responsible for their children's disease.

An earlier paper by the authors on the same topic stirred up controversy in the scientific community. Some feel that publicizing this viewpoint will make people less likely to follow advice about cancer prevention. This new study is likely to be even more controversial.

Of course, cancer science is incredibly complicated. Mutations are not the only thing that matter in driving cancer. Factors like hormones can also play a role in determining who the disease hits hardest. "We're not saying the only thing that determines the seriousness of the cancer, or its aggressiveness, or its likelihood to cause the patient's death, are these mutations," Vogelstein told NPR. "We're simply saying that they are necessary to get the cancer."