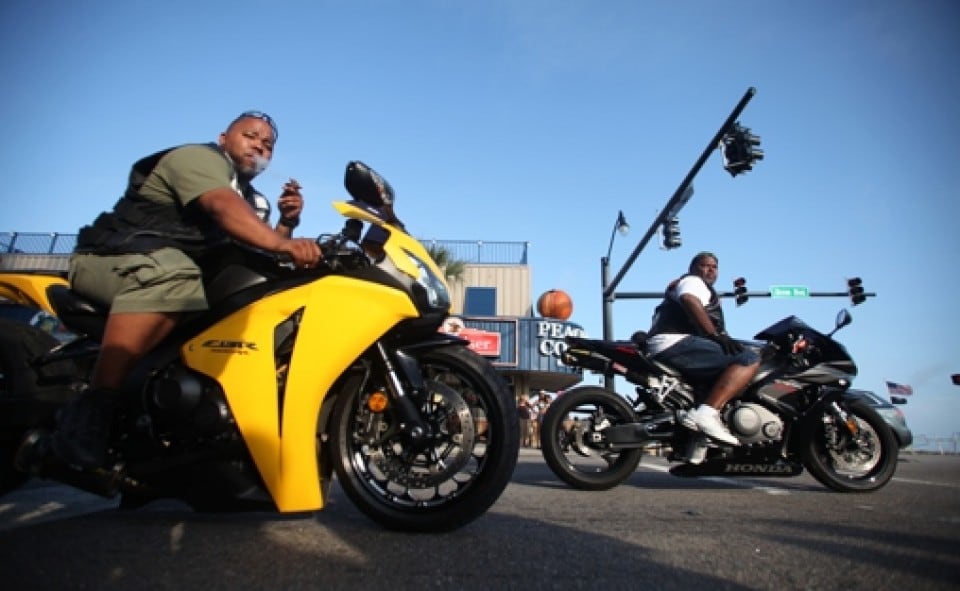 Myrtle Beach fills up with black bikers around Memorial Day. (Randall Hill for The Washington Post/File)

As longer days roll in and temperatures rise, I think of beach season. I think of weekend trips or longer vacations spent sipping margaritas or mai tais. But I also think about how for people who look like me — for black folk — beach trips weren't always an option.

When I was a child in the 1990s and early 2000s, I looked forward to our family vacations to Myrtle Beach, S.C. My family would pile into our station wagon and road-trip from Atlanta, loaded down with snacks and music for the ride. We'd spend days breathing in the ocean air, watching scenic sunrises and sunsets, laughing joyfully. Atlantic Beach, dubbed "Black Pearl," emerged in the 1930s as a haven for local black residents and vacationers from out of town gathering at the Grand Strand stretch of Myrtle Beach.

Mere decades before that, our vacations might not have been possible. Myrtle Beach is just one of many beach towns — not only in the South — that were segregated under Jim Crow laws and the unrelenting racism they enshrined.

And these days, it doesn't always feel like that era is completely behind us. Look at how quick white people still are to call the police on black neighbors for grilling at a public park, or staying at an Airbnb. In Myrtle Beach, the town fills up with black bikers from around the country for an annual event around Memorial Day. Lately, the municipal government seems to be trying to push it somewhere else.

But beaches that draw lots of black folk only emerged because we weren't allowed to go to so many other spots to begin with.

A stone's throw away from where the casino resorts now sit in Biloxi, Miss., Gulf Coast beaches were designated for whites only. Beginning on May 14, 1959, and continuing for months, black swimmers took to the waters in a strategic act of protest. They called them wade-ins. And they were attempting to desegregate beaches their tax dollars paid to preserve.

Miami Beach was segregated until the 1960s, too. In those early years, black people were allowed within the area only if they were employees of the hotels that lined the beach or servants for affluent whites in their beachfront homes. Things took a sordid turn in 1932, when Miami Beach's leaders signed into law Ordinance 457. The Associated Press reported a few years later that the ordinance required that more than 5,000 black workers be fingerprinted, photographed and required to carry identification at all times.

Segregation even took hold at beaches in California: Bruce's Beach in Los Angeles, Inkwell in Santa Monica, Pacific Beach Club in San Diego. Bruce's was black-owned and frequented chiefly by black people, as it was the only beach they were allowed to go to in the area. That certainly didn't stop racial tension. The NAACP organized wade-ins in 1927 after the city seized the beach and closed it because white residents had complained about the throngs of black people.

In response to segregated beaches and not being able to lawfully gather by the sea, black people congregated at other beaches — places like "Black Pearl" in South Carolina, Sag Harbor Hills in New York, Highland Beach in Maryland, Oak Bluff in Massachusetts or American Beach in Jacksonville, Fla.

Their attempts to find a safe space near the water — a space to freely exist — speak to me now, especially after the doldrums of a winter that felt like it would never end. I'm looking forward to beachside frolicking.

To the waves lapping up and drenching the gritty sand among seashells. To catching up on what seems like the never-ending list of books I should be reading but fall way down my list of priorities. To remembering how much of a privilege it is to decide to spend a day, weekend or week on the shore, knowing that just a couple of generations back, people who looked like me didn't have the same luxury.

In many ways, being at a beach in my black body, my toes sinking into dampened sand and my skin glistening underneath the sun's rays, feels like freedom, even if for only a moment my freedom and lack of restrictions are imagined. It also feels like a political act, knowing and holding the fraught history of the past — and the present.