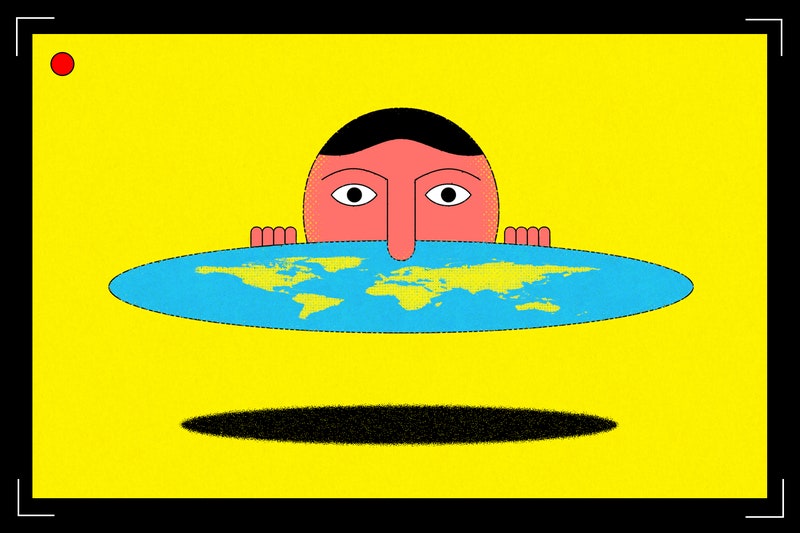 An interview with director Daniel Clark, who embedded with the flat earth community for his new documentary Behind the Curve.

Several years ago, Daniel Clark was looking to direct a documentary when he read discussions on Reddit about an increasingly popular topic: whether the Earth was actually flat, and if we were living in a Truman Show-like simulation. Clark's curiosity brought him to the Flat Earth International Conference, where he met Mark Sargent, a popular YouTube star and flat earther who became one of the main characters in Clark's documentary film Behind the Curve, a skeptical but enlightening look inside the flat earth community.

If you're looking for a documentary that outright dismisses everything these people believe in, this isn't it. Clark's film spends the time to understand who these people are, and what motivates them to believe in something so easily disproven. There's a lot to unpack here, from dating sites specifically for flat earthers to one of the subjects' zany DIY experiments to prove once and for all the Earth isn't round. This is all embedded in a larger discussion about conspiracy theorists and the dangers of anti-intellectualism.

Recently, we talked to Clark about why flat earthers interested him, the perils of believing in alternate truths, whether or not we should treat their community more seriously, and more.

GQ: What were some of the things you learned by spending so much time with flat earthers?

Daniel Clark: The fascinating thing was there were so many different school of thoughts in the community on what they believe to be true. There's a dome. There are walls on the edge of the Earth. But do the walls end at some point, or does it just go on forever? There are a lot of questions these people don't have answers to. They don't know what's in the sky, because we're not allowed to go there. They don't know what's on the ends of the Earth because we're not allowed past the border. So, they start becoming more accepting of theories that are introduced to them.

Was there any skepticism from the flat earth community about what you were trying to accomplish?

There were people who didn't want to speak to us. There were people who were convinced we were part of a government conspiracy to cover everything up. There were conspiracy videos made about us. People researched our IMDB profiles and came to some conclusions about us, that we're not who we say we are. Which I can say is not true, but nobody is going to believe me anyways if I say that. I will say we didn't set out to make a film to make fun of the flat earth community, or anything that made fun of them in a tongue-in-cheek way.

What was it about flat earthers that interested you?

When we started making the documentary, we realized we had an opportunity to use flat earthers as an extreme example of conspiracy theorists. I had worked with a camera operator who was a huge conspiracy theorist, like he had solved the O.J. Simpson case, and even he said flat earth was a step too far for him. Flat earth is the ultimate conspiracy theory, because most people can agree the Earth is in fact a globe. But you see the same traits and actions from groups who, whether it is political ideologies or religion, will defend themselves and their beliefs and always ignore the evidence. You see the same traits and actions in flat earthers, and hopefully you see those traits within yourself too if you choose to be self reflective.

You have scientists in the documentary too, to provide their perspective.

One of the people I talked to for the film said, "If I sit down with you, I could probably find something you believe in that is not based in fact, but based on feelings you have." That was great for me to hear, because I didn't want flat earthers to be made fun of. We considered reaching out to Neil DeGrasse Tyson and Bill Nye, but those were people who were antagonistic towards flat earthers. They believe we shouldn't engage with them, and it's such a horrible belief that it's not worth mentioning. They want people to make flat earthers feel bad.

And that wasn't the point of the film, but there is a danger in believing in things that are not true.

Yeah. There's a danger in taking your beliefs so far that you're willing to harm people because of them. If you can't trust anyone, or trust anything, and everyone is your enemy, that can manifest itself in very dangerous ways, and we've seen that all over the world in really horrible ways. It's great to be skeptical, but you can't always start from nothing.

And the point of bringing in psychiatrists and psychologists was not to tell them that what they believe in isn't true.

We didn't bring psychiatrists and psychologists into the movie to tell us what's wrong with flat earthers. We wanted them to talk about the cognitive behavior behind it and how someone can believe in something so strongly. What's going on in their brains, that they won't accept the evidence that has been presented to them over and over. How can they believe every photo ever from NASA was a lie? It's tough for people to get to that point. But these people have.

What do you think would have to happen for flat earthers to believe, either 100 percent that they are correct, that the Earth is definitely flat, or to change their mind and be convinced that the Earth isn't actually flat?

For some people, whatever they believe is never going to change no matter what you show them. If you sent a flat earther to space, even if they saw the globe through the window, they would say they're in an anti-gravity chamber that the government created, that they had been drugged to believe they walked into a shuttle, and that what was outside their window was a projection. Now, that's not everybody. There are certain people who are on the fence, and there's a lot of experiments you can do to test the curvature of the Earth. But to do that, you need a lot of precise equipment and to work with people that you can trust. You also have to be able to believe your own evidence.

Some people just don't want to believe it.

When people do experiments and get the answers they don't want, they just ignore it, and they say, let's try it again. If you're not willing to set a hypothesis and have the hypothesis disproved, you can say what you want, but you're just not mentally prepared to have it disproven, then there's nothing that's ever going to change.

What do you want people to take away from this film?

I hope people stop putting flat earthers into this huge group and just say they're idiots, that they're dumb and we should just throw them off the edge. If you don't have a conversation with them, and call them stupid, that only entrenches them in their belief. You want a society that can accept and trust science, but science needs to do a better job of communicating, and people need to be a little more accepting of other people's beliefs, and not be so black and white about right and wrong.

This interview has been edited and condensed.