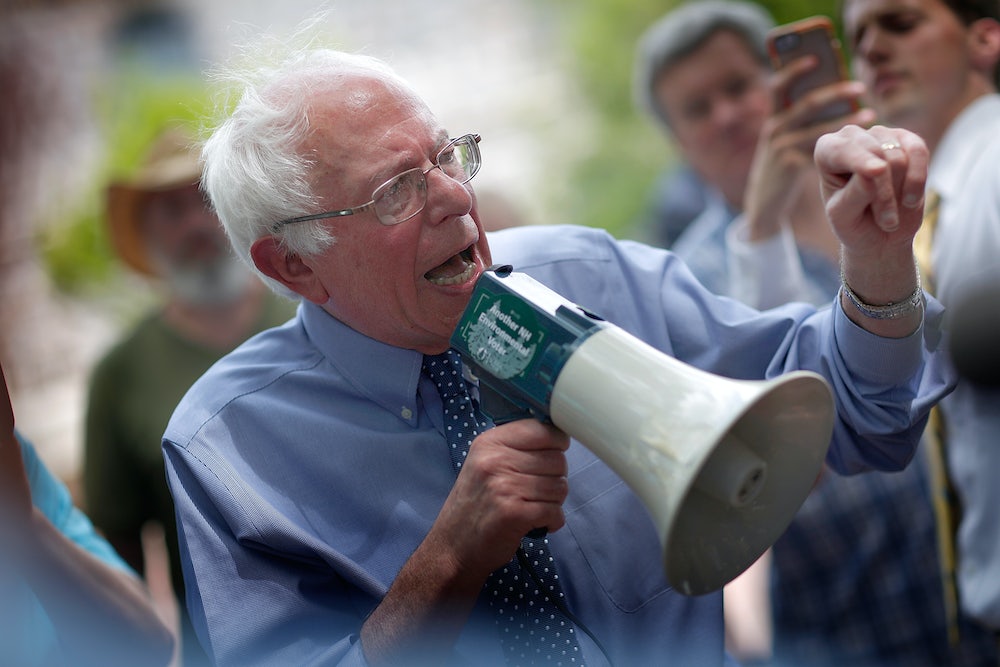 When CNN's Jake Tapper asked Bernie Sanders on Sunday if he wants to abolish the Immigration and Customs Enforcement agency, the senator was uncharacteristically vague. "I think that what we need is to create policies which deal with immigration in a rational way. And a rational way is not locking children up in detention centers or separating them from their mothers," he said. "What we need is Trump to sit down with members of Congress and work on a rational program which deals with this serious issue."

Sanders wasn't the only potential 2020 presidential candidate on Sunday to refuse to endorse the abolition of ICE. "There's no question that we've got to critically reexamine ICE and its role, and the way that it is being administered, and the work it is doing," Senator Kamala Harris of California said on NBC's Meet the Press. "And we need to probably think about starting from scratch." But Sanders's reticence was more surprising to his supporters and other liberals.

"Come on man!" wrote Splinter news editor Jack Mirkinson. "Let's hope that the next person who gets the chance asks him why he is still taking such a weak and morally timid position on ICE." Jeremy Scahill, co-founder of The Intercept, wrote that "Sanders is choosing to be on the wrong side of history on this issue."

bernie sanders is wrong for not calling to abolish ice.

It is never good to idolize politicians. All of them need to be pressured. https://t.co/F7rA3SCvUt

Created in 2003 by President George W. Bush, ICE has become increasingly unpopular among Democrats as evidence of its abuses continues to grow. Congressman Earl Blumenauer, who voted against the agency's creation, wrote in a Medium post on Sunday that it's time to "abolish ICE and start over." On Monday, Congressman Mark Pocan of Wisconsin formally introduced legislation to disband the agency. Insurgent left-wing candidates like Alexandria Ocasio-Cortez, who is challenging Congressman Joe Crowley, have already begun to campaign on the issue.

Ocasio-Cortez belongs to a cohort of Democratic candidates who have positions in common with Sanders: Medicare for All, free higher education, and a $15 minimum wage. But by seeming to support ICE's continued existence, Sanders has put a wedge between himself and those seeking to pick up the torch he carried in 2016. In the process, he's undermining his position as the nation's most prominent left-wing politician.

It is not always clear how Sanders views his role in American politics today. Is he a presidential hopeful? The leader of a political movement? Both are possible, but absent any announcement about his plans for 2020, we are left only with evidence that Sanders does hope to influence American politics on a long-term basis. His wife, Jane O'Meara Sanders, is now head of the Sanders Institute, a progressive think tank; and Sanders himself has hit the campaign trail for a few chosen candidates. But while Sanders still draws a crowd, his endorsements don't carry as much weight as left-leaning voters may hope.

"If his policy agenda has caught on widely among Democratic candidates, and succeeded in moving the party to the left, Mr. Sanders himself has struggled so far to expand his political base and propel his personal allies to victory in Democratic primaries," The New York Times reported on Sunday, noting that Sanders "has endorsed only a handful of candidates in contested primaries, and three of them have recently lost difficult races." And fewer than 50 percent of the more than 80 candidates endorsed by Our Revolution, the advocacy group founded by Sanders campaign veterans, have won their primaries, the article noted.

These failures can't all be attributed to Sanders himself or to the policy positions he promotes. Candidates to the left of the Democratic mainstream still face significant structural obstacles to victory. Their campaigns rely on small donors, often by design, and they face skepticism from the party they hope to represent. Sanders and his supporters have helped push the Democrats to the left, but the party has yet to truly embrace its left flank.

There isn't much evidence that it will, at least not under current leadership. In April, The Intercept published an audio clip of Minority Whip Steny Hoyer urging a left-wing candidate to drop out of his Pennsylvania race. Left-wing critics subsequently complained that the Democratic Congressional Campaign Committee consistently intervenes against left-leaning candidates, many of whom happen to be people of color. "If they're going to expand their map, they need to look at candidates of color," Quentin James, founder of the Collective PAC, told Vox in May. "I think the Democratic Party gets it, but we've got to stay on them to ensure the results we want to see are happening now."

Sanders could be a source of consistent, left-wing pressure on party leadership, whether or not he runs in 2020. If he intends to build a lasting political movement out of the remnants of his last presidential campaign, he'll need to become an effective counterweight to the mainstream Democratic Party. But based on his ICE comments and the uneven results of his campaign efforts, Sanders no longer seems like such a sure figurehead for disgruntled Democratic voters.

In fact, despite his sudden popularity in 2015, Sanders has never been a figurehead to everyone in the American left. His primary bid did draw the support of many leftists, but leftist voters in the United States aren't spoiled for options—or at least they weren't when Sanders launched his long-shot bid for president. That's changing now, and it's putting Sanders's politics in perspective. He does not occupy the left-most band of the spectrum.

It's certainly true that Sanders is to the left of most Democrats. But contrary to how he's often portrayed in the media, he is not a doctrinaire leftist. His principal benefit to the left has been to mainstream certain beliefs—namely, that access to health care, education, and living wages are rights, not luxuries. But Sanders is not a revolutionary. His views aren't even entirely consistent with democratic socialism, the political tradition he claims. It's one thing to call for breaking up the big banks, and quite another to call for the nationalization of private industries.

Sanders isn't just to the right of the average American socialist; he's to the right of Jeremy Corbyn, the leader of the U.K.'s Labour Party. While nationalization is a key pillar of the party's platform, it is ground politicians in the United States still fear to tread. In similar fashion, Sanders has yet to put forward a coherent leftist vision for foreign policy, a needless failure considering socialism's historical commitment to the prosperity of working people around the world.

Sanders is mostly an accurate diagnostician of American problems, and his prescriptions are simple ones: Tax the rich, expand health care, and pay people enough to feed their families. But these are radical positions only because the right wing has so successfully embedded hostility to welfare and government services in American political life. In previous eras, Sanders would have been a relatively mainstream politician.

"Bernie Sanders's socialism is Eisenhower's and F.D.R.'s world if Reagan had never happened: economic security updated by the continuing revolutions in gender, cultural pluralism, and the struggle for racial justice," Jedediah Purdy wrote for The New Yorker in 2015, when Sanders was ascendant. Sanders points out cracks in the order of things, but seeks to patch up the cracks rather than change the order itself. That's a renovation, not a revolution.