A disturbing video went viral last month. In it, a man can be seen shoving and kicking a woman, and then wrestling her to the ground in a chokehold that lasts for about 30 seconds. The attack takes place after he accuses her of shoplifting; the woman denies having stolen anything and even suggests he look in her purse. Once he lets her go, the woman, who is black, gets up and leaves. The clip was widely shared on Twitter, Facebook, and televised news.

The perpetrator was not a member of law enforcement, but in a different position of authority: the store manager at Missha Beauty in Charlotte, North Carolina. And he was a fellow racial minority, a person of Asian descent. Soonafter the video's dissemination, he was identified as Sung Ho Lim. Lim later filed a police report for strong armed robbery.

The video was posted on Facebook that same day, March 9, by a Charlotte resident. It inspired a small protest outside Missha Beauty and its sister store in Bronzeville, Chicago. According to
The Charlotte Observer, Lim apologized to the protestors and to the woman he assaulted, who still has not been publicly identified. "I was crazy," he said.

On March 11, a few days after the incident at Missha Beauty, a video with a similar dynamic was posted to Twitter. In the clip, which was reportedly taken at a mall in Pleasanton, California, an Asian man can be seen aggressively grabbing a young black woman's arm, accusing her of having stolen from his shop. She denied the charge, and alleged that he followed her and a group of her friends into a nearby store to confront them.

For so many black people in the US, videos of this kind, no matter how shocking, reveal nothing new.

The incidents recalled a long-standing division between black people and those of Asian descent across the United States. Beauty supplies — stores like Missha Beauty that sell hair and beauty products for black people and which have historically been difficult to find in regular drug stores — are often Korean-owned, and frequently the epicenter of that contentious relationship. "Selling black hair products, profiting off of our hair needs, yet we are the first ppl [sic] to be followed around in the store, harassed, etc.," wrote one woman on Twitter. "I remember the time this Asian store owner accused me of not being the owner of my debit card for no reason at all," tweeted another.

For so many black people in the US, videos of this kind, no matter how shocking, reveal nothing new. As Kimathi Lewis explained in a 2011 article, "For almost 50 years, the Korean-American community has dominated the black beauty supply market by opening large stores, buying out smaller black-owned ones and using the faces of black celebrities on their products and black employees in their stores to grow their businesses in the black community." The tense relationship between black women and Korean-owned beauty stores has been widely covered, exposing the continued struggle of one demographic to have ownership in an industry that profits off of them. Black women reportedly spend $7.5 billion a year on beauty products. But according to Atlanta's Beauty Supply Institute, of the 9,800 beauty supply stores nationwide, only 300 are black-owned.

The conflict extends beyond beauty shops, and is such a reality in certain communities that it became a well-trodden trope in black films, including Do the Right Thing (1989), Menace II Society (1993), and Friday (1995). (The broader tension recently got a nod in Jordan Peele's directorial debut triumph, Get Out, in which an Asian man is portrayed as complicit in anti-blackness.) Asian owners of small businesses serving predominantly black communities are frequently perceived to be profiting off of black people while treating them with distrust and/or hostility. It all came to a head in 1991, when Korean-American liquor store owner Soon Ja Du shot Latasha Harlins, a 15-year-old black girl, in the back of the head, having thought that she was shoplifting orange juice. Du was found guilty of manslaughter, sentenced to five years probation, 400 hours of community service, and fined $500. She never served jail time. Nearly a year after the shooting, the acquittal of four white police officers charged in the beating of Rodney King beating sparked the 1992 Los Angeles riots, in which several Korean-American-owned stores were the targets of looting and arson. Those acts, seen by some as retaliation for the owners' alleged mistreatment of their black customers, seemed to be solid proof of existing black-Asian tensions and anti-Asian sentiment in the area. 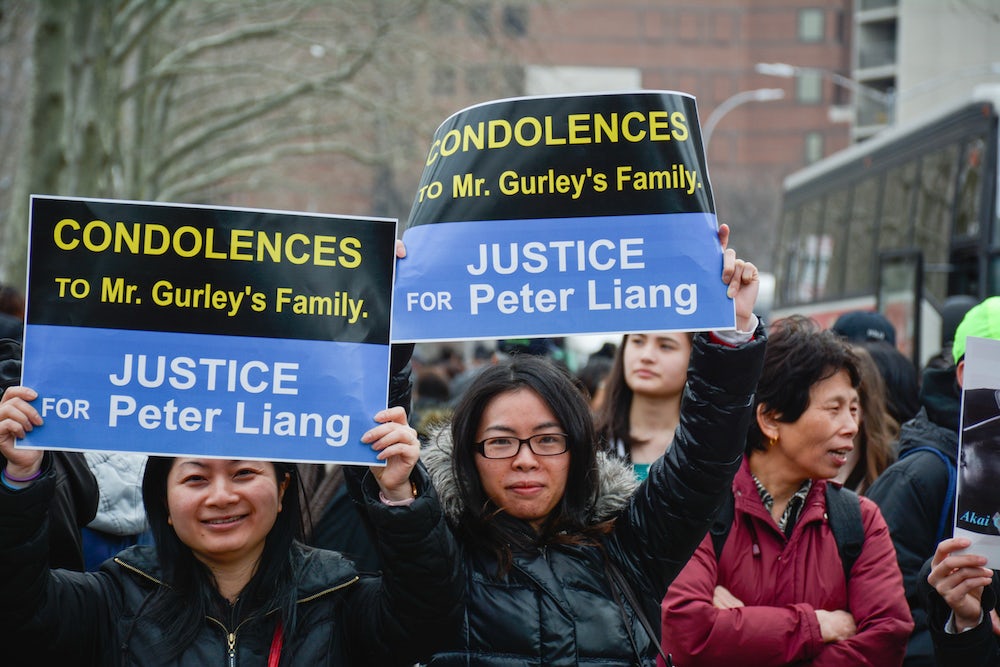 The conversation resurfaced on a national scale in 2014, when Chinese-American NYPD police officer Peter Liang shot and killed Akai Gurley, a black man, in a dark stairwell in a Brooklyn housing project. Liang avoided a prison sentence and was ordered to serve probation and community service. Protests erupted. On one side was mostly black people who wanted justice for Gurley. On the other side were people, many of whom were of Chinese descent, who saw themselves being treated as scapegoats for a culture in which anti-blackness is endemic but for which white people never have to pay.

Too often, members of these communities learn about each other through the white gaze of American pop culture. Model minority stereotypes about Asian-Americans — that they have strong family units, work hard, and succeed in school — conveniently put them at odds with characterizations of African-Americans. Stereotypes of the latter posit that they come from broken families, are lazy, criminal opportunists, and don't graduate from high school let alone earn advanced degrees. Among other things, these false readings engender a deep-seated fear of black people, making police officers more likely to react violently to them — and making store owners assume black women are stealing beauty blenders.

All these stereotypes gloss over cultural, individual, and economic realities of our country, ignore the diversity of Asian-American and black experiences, and dehumanize black and Asian people. In many ways, the two groups have some common ground. For a long time, both were considered unworthy of American citizenship. Both have had their identities weaponized along gendered lines. Both are thought of as a homogenous entity rather than seen for the ethnic and cultural and diversity they encompass. And both were seen as part of America only insofar as how much labor they could produce for powerful white people.

At the core of black-Asian conflict stories is the idea that each group is willing to sacrifice the other in order to overcome white subjugation.

But there are also very real differences between how each group exists in American spaces. In 2013, 39 percent of black children were living in poverty, compared to 10 percent of Asian children. That same year, young Asian adults with a Bachelor's degree or higher made $59,900 a year compared to the $20,500 earned by their black counterparts. And when it comes to mass incarceration, perhaps the most oppressive system in the US today, 37.9 percent of inmates are black, versus the 1.5 percent who are Asian. Meanwhile, Asian-Americans seem to be experiencing increasing rates of housing discrimination compared to black Americans. And according to the Southeast Asia Resource Action center, Southeast Asians in the US are more likely to be deported for past criminal convictions than other immigrant groups. Meanwhile 34 percent of Cambodian, Laotian, and Hmong students don't finish high school, more than double that percentage of the overall population. Statistics speak to opposing truths about minority experiences in the US while minimizing each group's diversity.

At the core of black-Asian conflict stories is the idea that each group is willing to sacrifice the other in order to overcome white subjugation. But when black-Asian conflict stories are told, the culpability of white supremacy often falls by the wayside. Asian prosperity narratives ignore the divide between rich and poor Asians, Asian immigrants and refugees, and Asians of different nationalities, ethnicities, and cultures. Asian diversity is erased to somehow disprove white supremacy's harm. And black oppression narratives do the same by painting black struggle as the result of collective personal failings rather than an overarching societal one.

In a perfect resistance movement, people of color would be united in the fight against white supremacy. But as black-Asian conflict narratives show, that, sadly, couldn't be further from the truth. And it's not as if black and Asian solidarity doesn't exist. It does, and it also has a notable history in the United States. But until black and Asian communities can take long, hard looks at their own anti-blackness, anti-Asianness, and their roots in white supremacy, black-Asian solidarity will merely be a whisper in the chorus for racial justice in the US And Asian-owned beauty supply stores will continue serving as a microcosm for a strained intercultural relationship.