In 1996, San Francisco's department of parking and traffic published a draft of what was to be the city's first bicycle-specific transport plan. Almost immediately, cyclists in the city noticed something amiss: there were no bike lanes planned for Valencia Street, a popular route through the largely Latino Mission neighbourhood. Opposition to the plan grew so intense that the following year, a crackdown against pro-cycling protesters ended in a riot.

And Valencia is now a cycling hub too. Indeed, the street became the first in the city to replace car lanes with bicycle paths.

Rightly or wrongly, gentrification is often seen as a process that arrives on two wheels. From Red Hook in Brooklyn to London Fields, fixed-gear bike-wielding young professionals have flocked to former industrial lots and waterfronts.

But does cycling really contribute to gentrification? John Stehlin, a geographer at the University of California, Berkeley who has studied San Francisco's cycling politics, says the relationship is complex. "Cycling feeds into wider urban changes, including gentrification, but it does not cause gentrification. A bicycle lane gets put on a street that is already undergoing change."

When it comes to cycling, our cities are certainly changing. The numbers cycling to work in London more than doubled from 77,000 in 2001 to 155,000 in 2011, according to census data. Brighton, Bristol and Manchester all registered big increases, too. In the US, the number of people cycling in the previous 12 months increased from just over 47 million in 2008 to more than 66 million in 2015.

Gentrifying districts are often those most suited to cycling. Closer to the inner city, they were often built during the age of slow-moving, horse-drawn carts. In the 10th arrondissement of Paris, for example, where on-street parking is scarce, the bike is often a far more rational choice than the car for newcomers.

But the growth of city cycling is not purely utilitarian. Among what urban theorist Richard Florida calls "the creative class", the bicycle is a potent symbol of identity and status. And more bikes, it seems, means more well-paid knowledge economy jobs. "Cycling to work is positively associated with the share of creative-class jobs and negatively associated with working-class jobs," Florida wrote in 2011.

Consequently, local hostility to cycling infrastructure has often been a proxy for wider anger at gentrification. In Portland, Oregon in 2011, a proposed bike lane through a historic African American neighbourhood led to opposition from local residents. In 2013, a prominent church opposed a similar scheme in downtown Washington DC. 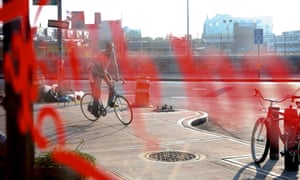 The gentrification of the old industrial waterfront of Red Hook, Brooklyn has divided the community. Photograph: Alamy

But this "cycling segregation" is a product of city planners prioritising the demands of real estate developers, says Samuel Stein, a graduate student at the City University of New York who has researched the city's cycling infrastructure. Rather than build bike lanes to connect marginalised communities with public transport, cycle paths are often used to encourage investment in gentrifying neighbourhoods.

"Bike lanes are often introduced in areas that are gentrifying," says Stein. "The people who produce gentrification - landlords and developers - want this because it makes a neighbourhood more desirable and increases their property prices." City planners often "use cycling infrastructure as a way to facilitate development. So where gentrification goes cycling infrastructure follows, but that is a problem of planning, not cycling."

In the US, where just 0.62% of the population bike to work, there is a stark racial divide between who cycles and who doesn't. In Boston, just 1% of those who use the city's bike-share scheme are black, even though black people make up more than 20% of the city's population. Even in Amsterdam, where almost 40% of journeys are made by bike, Moroccan and Turkish immigrants are less likely to ride.

Minorities are just as likely to cycle but often live in areas that lack bike infrastructure, says Stein. "We need to prioritise those with the most need by putting bike lanes into more working-class and immigrant neighbourhoods."

Before taking his PhD at Berkeley, Stehlin worked in a bicycle shop in Philadelphia for four years. "There was a disconnect between what you heard in the press about bicycling being this young, white hip thing, and the people actually coming into the shop. Our shop served a lot of low income immigrants who didn't speak English," he recalls. 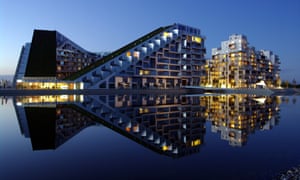 Cyclists can bike all the way up to the 10th floor in the 8 House building in Copenhagen. Photograph: Martin Darley/Alamy

Stehlin says cycling and social disruption do not have to go hand in hand. In the late 1990s, long-term residents of West Street, a working-class neighbourhood in Oakland, California were concerned about speeding cars near their homes. Consequently a bike lane - one of the first in the city - was laid down. The presence of cycling infrastructure encouraged more people on West Street to cycle, but it "didn't cause gentrification" there. The lesson? City planners need to make bike-share schemes affordable and spread cycling infrastructure more equitably across the city.

Simon Munk of the London Cycling Campaign, who lives in Waltham Forest - one of three cycling-friendly "Mini Hollands" established in London - says bikes are far from being the sole preserve of young, white professionals in the UK. "Black and minority ethnic cycling is very much on a par with the general population. Historically that hasn't been the case," he says. Hackney has the highest rate of cycling in London - a reflection of its changing demographics but also its diverse population and, until recently, a lack of alternative transport.

Improved cycling facilities have given poorer residents greater access to transport, says Munk. "Some 60% of residents have no access to a car."

But the Australian architect Steven Fleming has a more radical, bike-based solution to the problem of mobility and inequality in our cities. Fleming, who splits his time between Amsterdam and Australia, wants to see new housing built beside bike lanes, with easy access from homes right on to cycle paths. His vision even has a name: "bikeitecture".

"We should take a bike-centric view of things," he suggests. "It really is transport, it's not just supplementary. We have been indoctrinated by the machine age to think that we should only have machinery as transport." The alternative, Fleming says, is to develop brownfield sites around cycling, not driving.

One example of bikeitecture is 8 House in Copenhagen. This apartment complex was designed around a series of inter-connected ramps that allow residents to ride directly from their front door, regardless of what floor they live on.

Fleming envisages a future in which the older, gentrifying neighbourhoods of today become completely car-free, with all new developments fully cycling integrated. The alternative, he says, is cities that are slower, more gridlocked and even more unequal.

"It's important we find a new way because anywhere in the world where cities are expanding, the first line on paper is the new freeway," Fleming says. "If technophiles win we will have cities dominated by driverless cars. But the rational choice for the public good, and the good of the city, is bicycling."

Are you experiencing or resisting gentrification in your city? Share your stories in the comments below, through our dedicated callout, or on Twitter using #GlobalGentrification