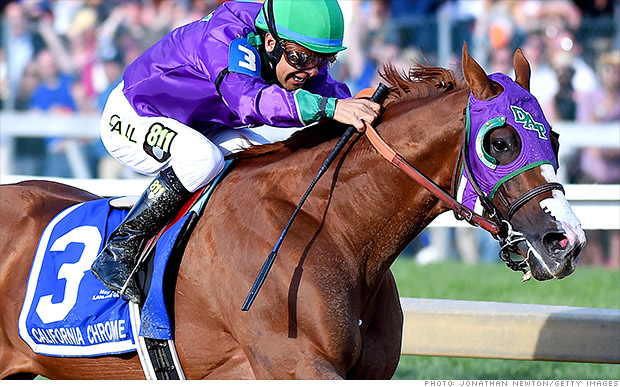 California Chrome is heading to the Belmont Stakes in search of the Triple Crown. But the thoroughbred is already set to collect millions in stud fees.

Chrome has won purses totaling $2.3 million from the Derby and the Preakness. And if the horse also wins at Belmont on June 7, his owners will collect most of that $900,000 prize.

But purse money is just a part of the upside in horse racing. There is even more money to be made in breeding a thoroughbred.

"Once you've won two-thirds of the Triple Crown, you're cemented into exceptional stud fee range," said Evan Hammonds, executive editor of BloodHorse, a leading publication for the thoroughbred horse industry.

Related: Why the Kentucky Derby is good for the economy

Hammonds estimates that California Chrome will likely get $25,000 for every foal he fathers, and that he can likely father 100 to 120 foals a year. So Chrome's owners should pocket about $1.5 million a year for the first few years he is put out to stud.

Related: California Chrome can use nasal strips in Belmont

After that, California Chrome's stud fees will be determined by how well his offspring do in their own racing careers. If he fathers a line of winners, he'll continue to command top-dollar fees, Hammonds said.

But even if their record is less impressive, California Chrome's owners should be able to keep collecting five-figure stud fees for another 10 years or so.

The one thing that California Chrome won't do much of after the Belmont is racing. The potential stud fees are so great that owners generally retire winning horses quickly, rather than risk an injury that could mean having to put them down.

Related: How the 1% roll at the Kentucky Derby

California Chrome will also help make a lot of money for Belmont Park, which is owned by the New York Racing Association. The June 7 race is likely to draw more than 100,000 fans — about double the attendance the Belmont Stakes would get without the chance of a Triple Crown.

If California Chrome does win at Belmont, he'll be the first to win all three of the sport's premier events since 1978. A Triple Crown win isn't likely to lift the horse's stud fees much higher, according to Hamonds. But his owners could earn some significant appearance and endorsement deals.

"I think he'd be a natural on ads for Google Chrome, don't you think?" said Hammonds.