The old man polishes off his burger as he watches McDonald's Man crumple, tears starting to stream down his face. The Creep Hunters then start haranguing him about his threat to cut himself; they insist he needs a medical examination before they'll let him go. "We're either going to have an ambulance show up, and we're going to get you checked out, because I don't trust that you're not going to hurt yourself, or we're going to go down to the hospital together and I'll drive you there myself," says Brady. The old man watching the scene takes out his phone to snap a picture. Then Brady tells him to call 911.

"It's too late, man," Brady says. He's heard it before—the pleas, the chest-pounding despair. Once a man even curled up on the ground into fetal position.

But there was something different about this guy, Brady will admit later: He has never seen a target ask to call his parents before. "Please come right away if you love me!" McDonald's Man cries into the phone. 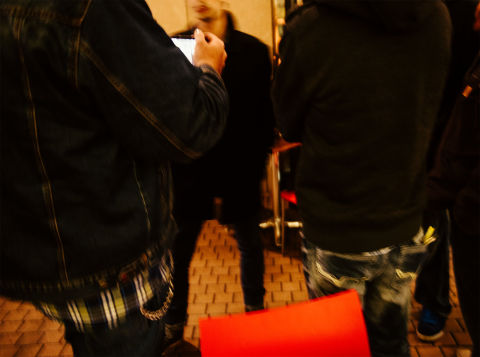 Within minutes, two police officers show up. Like the teacher's pet, the Creep Hunters have everything cued up to show them: The video they just taped, every message he's sent to Kat. In the middle of show-and-tell, the man's family starts trickling into the restaurant, standing awkwardly in the corner. "Can my dad please come by my side, so I can have somebody who is there?" McDonald's Man pleads with the officer, who tells him firmly to stay put.

Finally, it's time. Come with us, the officers tell him, gesturing for him to take his coat. They're not going to do this in front of everyone.

The moment they walk out of the McDonald's, the cops start putting him under arrest. He suddenly turns and tries to wrench the door open, desperate to get back inside—back to his family, back to the moment before he learned the truth about Kat. He heaves the door open an inch before the officers yank him back and cuff him. As they're putting McDonald's Man into the squad car, a young man rushes up, telling them he's a relative. "Is he going to need a lawyer?" he asks.

"He will," the officer tells him.

Brady and G-Man drive away, invigorated by their success.

"These guys are amateurs, and they don't have a clue what they're doing."

Charges haven't been filed since the man was arrested in November, but local police tell me it's still an open investigation. When I call the number that McDonald's Man reportedly gave Kat, the man who answers the phone hangs up the moment I mention the Creep Hunters.

In the days after the catch, I can't stop thinking about everything that led up to it: Craigslist, a site that's long fallen out of fashion for most internet hookups; hundreds of emails with an endlessly patient decoy; a meeting arranged on a night a reporter was in town. I ask Kat how much of a threat she thinks McDonald's Man ultimately posed—in person, he seemed even more guileless than in the fawning messages that she showed me. "The opportunity arose, and he took it," she says. "I don't think he'd go out looking for it. But it fell in his lap."

Since my trip to Vancouver, the group has backed away from their hallmark confrontational videos, growing wary of the potential consequences as their rivals have faced criminal charges and defamation suits. They've taken down their old website with the filmed catches and smutty chat logs, replacing it with a bland, corporate-style template and a sanitized mission statement: "We at Creep Hunters Canada are not vigilantes, we do not take the law into our own hands."

Brady recently told me they've stopped the face-to-face confrontations altogether: They'll set up the stings, then ask the cops to meet the guys instead, posting videos of the arrests, photos of the suspects, and detailed allegations. He claims that's what he wanted out of Creep Hunters all along: court justice, not street justice. But Brady also admits that going to the cops is a good PR move: "It's better for—I hate to use the word—our brand."