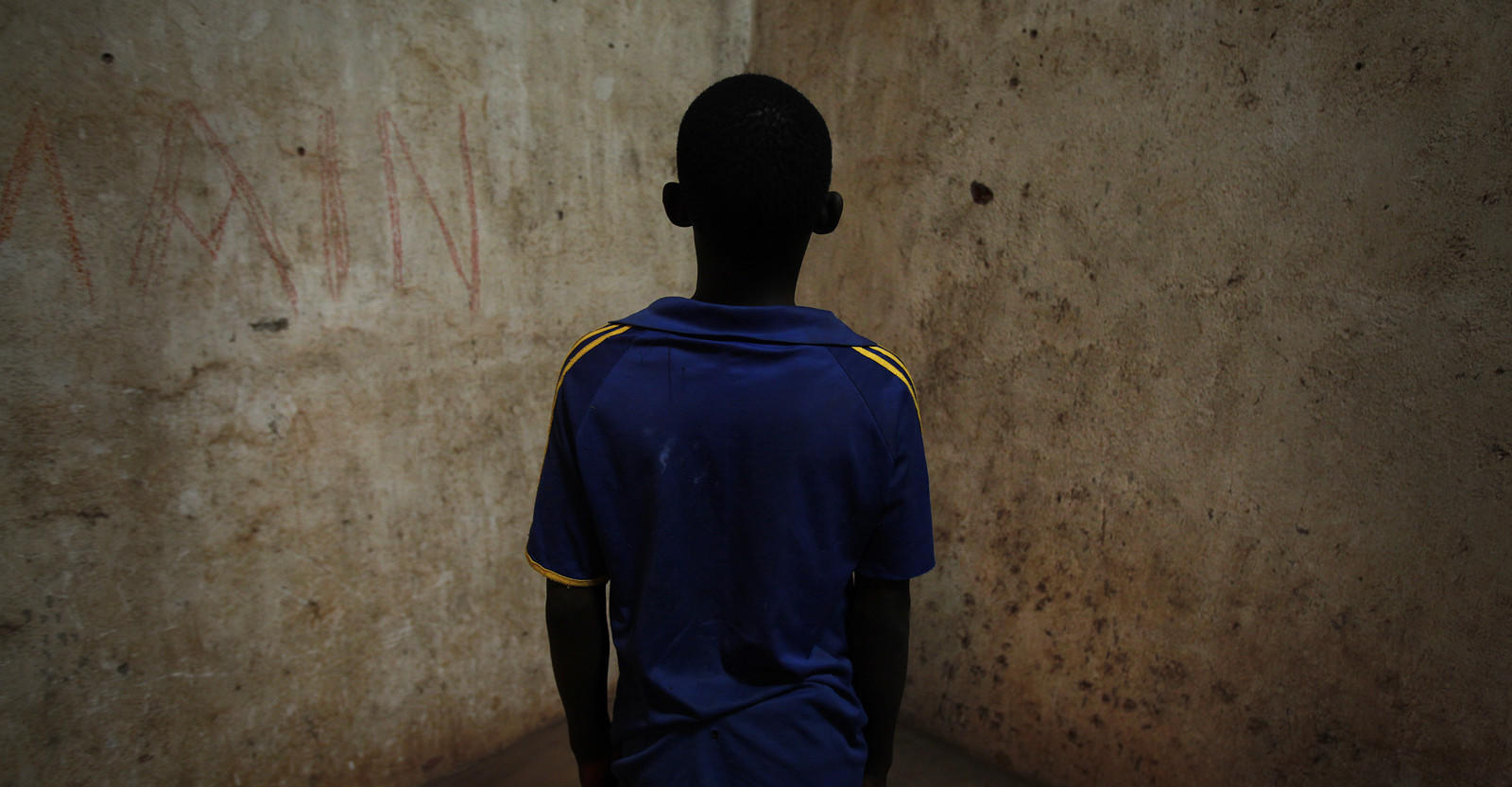 Jordy, 14, joined the rebels for survival and revenge. At least 6,000 children and probably many more are believed to have been recruited or abducted in the Central African Republic conflict. (Rick Loomis / Los Angeles Times)

SIBUT, Central African Republic — Not long ago, Charly had all the money he needed. He had a rebel uniform that commanded fear in his hometown. He had an AK-47, and he wasn't afraid to use it.

He was still a boy, but he felt like a man.

Now he has returned to his old life. He is once again a helpless boy. The thought of it makes him sit rigid with anger, his eyes flashing.

"See the shoes I'm wearing," the teenager snapped, pointing at a pair of dusty blue flip-flops. The soles were so full of holes that he might as well have been barefoot.

With the rebels, he said, it was different: "I had boots, a uniform and a gun in my hand."

With the rebels, he had power.

The conflict tearing the Central African Republic apart has not only turned neighbor against neighbor. It has brought childhood to a halt.

Children have seen their parents hacked to pieces. They have watched as boys and girls just like them were shot or maimed. Some have been forced to make cold calculations far beyond their years, taking up arms with the same fighters who upended their lives or killed their relatives.

Children have been pawns in virtually every conflict in this country plagued for decades by coups, mutinies and rebellions. When a mostly Muslim rebel coalition known as the Seleka seized power a little more than a year ago, as many as 3,500 children were in the ranks of armed groups. The number swelled to 6,000 or more as self-defense militias, mostly Christian or animist, started fighting back, UNICEF estimates.

Some, like Charly, were handed guns. Others toted cargo or were taken as sex slaves.

Children barely in their teens still accompany bands of fighters along the rutted 100-mile road from Bangui, the capital, to Charly's hometown, Sibut. Even by day, the road is dangerous. Armed men menace travelers from makeshift roadblocks; other fighters march the winding route with rifles and machetes slung over their shoulders and protective amulets draped around their necks.

The Seleka left behind nearly 400 children when they were pushed from power in January. Even as the fighting picked up again recently, UNICEF negotiated the release of more than 1,000 others from the self-defense militias.

The agency made some of the former rebel children available to tell their stories on the condition that their precise location and their full names not be used.

On a recent day, dozens of the children were gathering on a shaded veranda here. Some were about to perform a reenactment of their lives with the rebels for visiting aid workers. They carried wooden guns, brandishing the rough-hewn toys with the ease born of experience.

Several of the children appealed to the visitors with shy, winsome smiles. A few were angry, shouting that they needed help. A pregnant young girl was pushed forward. "See what they did?" a boy said of the rebels.

Charly, 16, says he regrets leaving the rebels. "With a gun, you always have money," he says. "Now I'm here with nothing."(Rick Loomis / Los Angeles Times)

Sitting on a bench in a dim, windowless room, Charly recalled the day the rebels arrived.

It was more than a year ago. He was selling soap, sugar and other goods from a market stall here. At 15, it provided his only income. His father was dead, and his mother couldn't support him.

The fighters streamed in on motorcycles and in pickup trucks, firing their guns, ransacking homes and businesses and setting them on fire.

"They were firing everywhere," Charly said, his voice quavering. "I abandoned everything and ran."

The fighters were with the mostly Muslim rebel alliance. Charly is Christian.

But something was more pressing than his fear of the rebels: Survival.

"I entered the Seleka to feed myself," Charly said.

At first, he recalled, the rebels were suspicious of the lanky local boy who appeared in their midst. Then they found out he could help them. He wasn't afraid, and he knew the town.

"When they saw I was brave, and I could point out houses to rob, they accepted me," he said.

He was given a Kalashnikov assault rifle and sent on patrols around his hometown. His fear was replaced by swagger.

"Everyone saw me carrying an AK," he said. "One day, an old woman tried to curse my grandmother. I was furious, so I shot her in the foot."

At 14, Jordy doesn't look much taller than the gun he carried for the rebels.

It was also a way to seek revenge against the Seleka fighter he said killed his brother and a cousin. One day, he spotted the man. Jordy wanted to shoot him, but other rebels intervened, he said dully.

He doesn't like what he did with the Seleka.

"I did a lot of bad things," he said, eyes downcast. "I ransacked. I pillaged. I took people's things by force."

When the rebels continued their advance on Bangui, Jordy, Charly and other youths went with them. Some were forced to go, but others were enticed by the prospect of looting in the capital.

Children have been pawns in virtually every conflict in the Central African Republic, a country plagued for decades by coups, mutinies and rebellions. (Rick Loomis / Los Angeles Times)

Jordy's grandmother, who has cared for him since his parents separated years ago, followed him to Bangui to beg for his release. His commander agreed, but at first Jordy didn't want to go.

"When I saw them starting to kill people, that's when I left," he said.

Jordy was fortunate to have his grandmother plead his case. Other children don't even know where their relatives are — hundreds of thousands have fled their homes in the fighting. Humanitarian workers who are caring for some of the former fighters and sex slaves can spend months trying to locate the children's families.

Even when family members can be traced, they may be reluctant to accept a former fighter into their homes. And children who are used to carrying weapons can find it hard to obey their parents.

Jordy said he hasn't had any trouble with the mostly Christian and animist militias that are now ascendant in this area. He shares the same religion and ethnicity as the fighters.

"They even gave us food," he said.

But in Bangui, militia members ransacked a center that helps the children; a boy who tried to join the anti-Muslim militias was killed when the fighters learned that he'd previously been with the Seleka.

And here in Sibut, some neighbors can't forgive the children for joining the rebels. Not long ago, a man who recognized Jordy assaulted him in the street, knocking him down.

Charly was sitting with Jordy as he told of being beaten. He put his arm around his friend, and they were two boys together against the world.

Mireille was 14 when a rebel colonel spotted her last year selling homemade alcohol by the side of the road. He announced that he wanted to marry her.

"I said, 'No, I'm still young,' " recalled the slender girl with intricately braided hair. She sat hunched on a bench as she told her story, wringing her hands in her lap.

That night, the rebel showed up at her home, where she was alone with three siblings. Their widowed mother was out of town at a funeral.

Mireille was just 14 when she was abducted by a commander in the Seleka rebel coalition. He raped her for several months and then abandoned her.(Rick Loomis / Los Angeles Times)

Mireille was taken to a Seleka base. The colonel gave her a new name, Kadija. And he raped her repeatedly.

None of the other rebels were allowed to touch her. The colonel assigned an aide to watch her when he went out looting.

"I wanted to escape, but I couldn't because everyone had weapons," she said.

After several months, the colonel lost interest in Mireille and took other "wives," including her older sister. Mireille doesn't know what happened to her. She tries not to think about it.

The reunification process has been especially fraught for the 78 girls freed by the Seleka. Like Mireille, most were sexually abused. Their families and communities often consider them tainted.

It took two weeks for Mireille's mother to allow her into the house again. At first, she stayed with neighbors who prevailed upon her mother, arguing that it wasn't Mireille's fault she had been taken. Church members also spoke on her behalf.

Today Mireille has no interest in getting married or starting a family. The colonel ended those dreams.

Over and over, she used the same words for what he did to her: "He deflowered me."

She said she'd heard later that the colonel had died in battle. Her voice betrayed no emotion.

Many children still march with the fighters. Those who have left struggle to find a way forward.

Mireille said she'd like to go back to school, maybe learn to sew. But schools in her area have been closed for months.

Jordy said he would like to try farming. "If the NGO here can help me to get cows, just so I can have some money, that will help," he said.

Charly has already been approached by militias on the other side, eager to take advantage of his knowledge of the Seleka.

He regrets ever leaving the world of men to take care of his ailing mother.