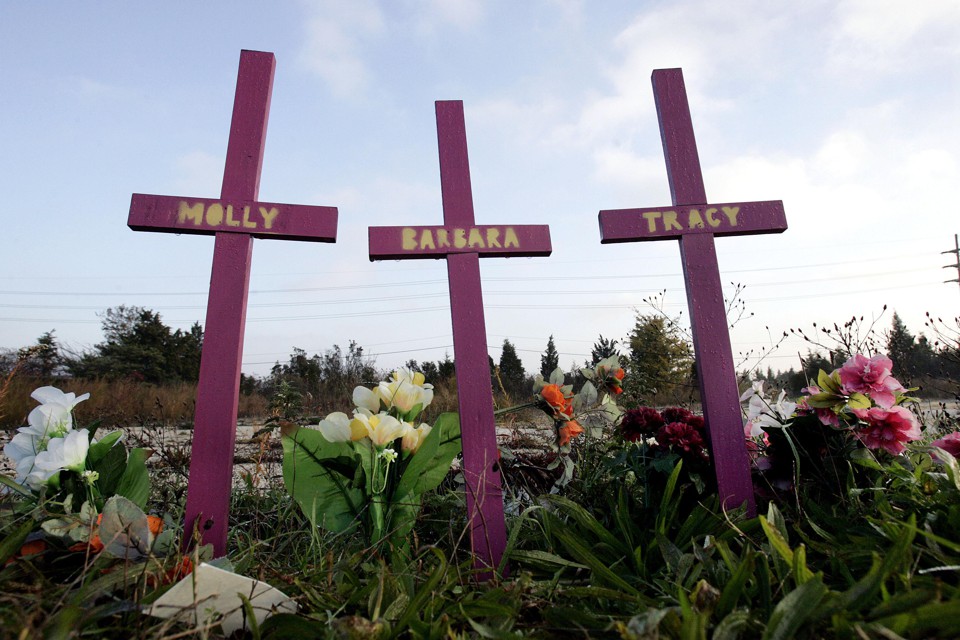 Three crosses stand near the spot where four sex workers were killed in New Jersey.

Sara Katsanis, a bioethicist at Duke, studies the compications that arise when DNA databases are used to combat crime, especially human trafficking. If a child is kidnapped and illegally placed into adoption, for example, DNA is a reliable constant for identification. From this work, she is familiar with the ethical questions that come up when a victim is asked to give up their DNA to a database.

But even so—or perhaps, especially—she was surprised to hear of a program initiated by Dallas law enforcement to collect DNA from truck stop sex workers to solve hypothetical future crimes. The pitch was unusual and, honestly, grim. Sex workers are more likely to be victims of murder, 60 to 100 times than other women according to some estimates. In Dallas, police were worried about unidentifiable dead bodies that turned up by the side of the highway. (The FBI has warned about serial killers working as truck drivers.) Voluntarily give a DNA sample now, the program promised, and if it's your dead body, at least your family will know.

Can sex workers truly consent when it's police doing the asking? Would they trust police not to use their DNA against them, when they have very little reason to trust police at all? The program, which was first proposed in 2007, had done a very small survey and found women universally willing to contribute their DNA with no major concerns. "So the ethicist [part of me] said, 'Oh really, no concerns?,'' recounted Katsanis. " And who asked? Oh the police, oh hmm, I wonder." So she and a colleague, Jennifer Wagner, went down to Dallas, to talk to the sex workers themselves, without any law enforcement in the room.

The DNA collection program around Dallas was just one part of a larger Prostitute Diversion Initiative to get sex workers off the streets and into treatments. Initially, the Dallas Police Department would just arrest sex workers at truck stops. It didn't work. There were hundreds of sex workers at these truck stops, and they would go right back after their 48 hours in jail.

"What do you want on your toe tag?…Do you want Jane Doe in a potter's grave or do you actually want your name on there?"

"We were really frustrated by this," said Louis Felini, then a Dallas PD sergeant who initiated the program. Felini managed to convince his skeptical superior to try something new. And in 2007, the Dallas Police Department and Dallas County Sheriff's Office began camping out at a truck stop from 6 pm to 3 am with counselors, social workers, and nurses. The officers round up sex workers, who can either go to jail or talk to counselors and into treatment programs for drug abuse and job training. Many choose the latter.

Dallas' initiative has gotten some attention in national media, but the DNA collection aspect less so. (The only other similar DNA collection program anyone else had heard of was in Edmonton, Canada.) Submitting a DNA sample was not a prerequisite for getting counseling or treatment, but Felini is ruthlessly blunt about its goal. When I asked him how he pitched the program to sex workers, he answered with a well-practiced line: "What do you want on your toe tag?…Do you want Jane Doe in a potter's grave or do you actually want your name on there?" In 2013, the DNA database helped identify a sex worker who died in an ER in Fort Worth. 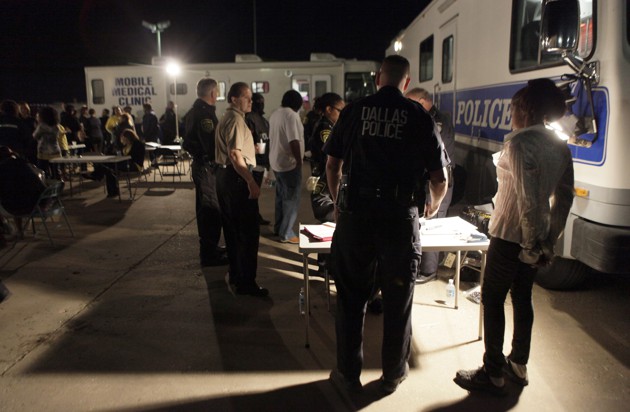 A woman arrested for prostitution is taken for processing at a mobile command unit that includes health and social services at a truck stop in Dallas.
(LM Otero / AP)

The sex workers, themselves, were of course well aware of the dangers in their work. In the focus groups that Katsanis ended up conducting in Dallas, they told stories of rapes, beatings, and murders. "One of the girls...they found her mutilated and chopped up, and in a trash can in a whole other city," said a woman given the pseudonym of Eva in the focus groups.

Katsanis ended up doing two focus groups, one of women currently in treatment at the Nexus Recovery Center after being picked up by police at a truck stop, and another of women who had recently completed treatment but came to weekly check-ins at a Positive Recovery Intensive Divert Experience (PRIDE) court. To her surprise, even though these women distrusted the police, they were on the balance willing to provide their DNA. Eva, for example, also said:

My guy, the few times that I did talk to him while I was on the street, he always used to joke about the fact that they were going to tattoo my social security number and my address on my foot so that if I died that somebody knew who I belonged to. That was one of the reasons why I did it.

What was striking in these interviews is that DNA, became an anchor of identity these women, who use fake names and often lack IDs. For example, "Florence" explained:

Because sometimes [pimps] will take [women]. They'll strip them of their drivers' license, their social security card, their name – make them use another name. And if they have them all drugged up… But at some point, if you have me hopped up on enough drugs, and I'm up for enough days and have, you know, a little amount of food and no sleep, I mean, after a long period of time, I'm sure that anyone could forget who they are.

But the women did worry that their DNA, once stored, could be planted on crime scenes. Florence also said:

I've heard of cases where people have been... their DNA was found somewhere where they had never been. So that would be a concern to me is who has access to it because you never know how crazy a person can be to take your DNA, put it somewhere, and implicate you in a crime just by doing so."

And "Pearl" worried that her DNA could be mistakenly matched, "Nothing's perfect," she said in the focus group, "It could place you in a crime scene you weren't even in... I won't be giving mine up. Personally." And forensics and legal experts have raised questions about the black box algorithms sometimes used to determine DNA matches.

Dallas law enforcement had actually taken care to create some separation between law enforcement and the DNA database. Although officers took the cheek swabs to preserve chain of custody—in case the evidence needs to be used in court—the actual analysis and storage happened at the University of North Texas Center for Human Identification. (Louis Felini's wife, Martha Felini, an epidemiologist at UNT, helped wrangle that connection and also oversee other aspects of the diversion program.) They promised the DNA would only be used to identify bodies. And the collection itself took place at either the Nexus Recovery Center or during weekly check-ins at the PRIDE court—not at the truck stop or a police department.

But Katsanis notes that "consent" is always tricky when it's law enforcement asking a vulnerable population. The power difference is so vast. Stacey Burns, clinical director of the Nexus Recovery Center, said counselors explained the DNA collection program and posted a sign-up sheet for women who were interested. It was always presented as voluntary. Sex workers who didn't sign up then had another chance during weekly check-ins at the PRIDE Court. "We rarely had people say, 'No, I don't want to," says Lorena Villalva, a probation officer and case manager with the court. "Whereas in the field," she said, "They're like, ' Uhh.' A lot times they don't believe it's not going to be used against them."  She chalked up the difference to the trust built up from meeting in person every week.

In the Katsanis' focus groups, the women came up with their own ideas about how to change consent for the DNA database—the same ideas that bioethicists routinely discuss in academic circles. One of the women, said Katsanis, had the idea of rolling consent. "She didn't use the term—I don't think she even used the word 'consent,' but she had the concept of a rolling consent and recontact for the participants so that women can change their minds," said Katsanis. If a woman leaves sex work and no longer believes she is in danger, for example, she could have her DNA profile destroyed.  "We never expected that level of engagement, which reflects poorly on us as researchers more than anything," said Katsanis.

Crystal DeBoise, managing director of the Sex Workers Project, said she too was surprised that women in the focus groups were so open to idea of submitting their DNA to a database. But she questioned whether it was the best use of resources, "My overwhelming feeling going through is why aren't we focusing on prevention as a community rather than identification," she said. Given how sex offenders sometimes target sex workers and the backlogs of untested rape kits in many jurisdictions, she pointed out, why not test those?

And true, funding for such programs are often difficult to sustain. Louis Felini has been since transferred and no longer oversees the program in Dallas. Law enforcement has cut down the nighttime events from once a month to once a quarter. And the DNA collection ended a couple years ago when funding to collect and sequence them ran out. The University of North Texas had sequenced 300 samples by then. A spokesperson estimates perhaps 100 more remain unprocessed in an evidence locker.

Nearly every person involved with Dallas's diversion program I talked to spoke wistfully of resuscitating the DNA collection. If it does, or if other cities look to adopt similar programs, Katsanis hopes that law enforcement will think harder about consent, even if their subjects seem to be willing.