Are we there yet?

Another exhausting week in the United States of America; would be it a crime to put ourselves in a coma until this election is over? At this point, a conspiracy to build a death ray in upstate New York seems like a reasonable distraction. It's a crime that has been on Reyhan's mind since she put in her time in the same town as one of the criminals.

As ever, Crime Syndicate is Michelle, who wrote a very long crime story that will be turned into a movie (!!!!), and Reyhan, whose website is currently filled with scary things like gibbets.

The shenanigans began in 2012, when a General Electric mechanical engineer named Glendon Scott Crawford walked into a synagogue in Albany, New York. He was looking for the man in charge, someone who could field his outrageous offer. Finally, he found Rodney Margolis, head of the Jewish Federation of Northeastern New York. What if, he asked Margolis, I had a device that would help Israel by eliminating your enemies, a.k.a area Muslims? It would be a "black bag" operation, Crawford promised, one that could "kill Israel's enemies while they slept.

Margolis was baffled and scared, and, as he would later testify, immediately contacted the authorities. It turned out that he wasn't alone. Crawford had called a number of upstate New York synagogues, hoping to interest someone in his plan.

Unfortunately, selling a giant, weaponized x-ray to deliver fatal doses of radiation does not seem to besomething that can be done through cold-calling. 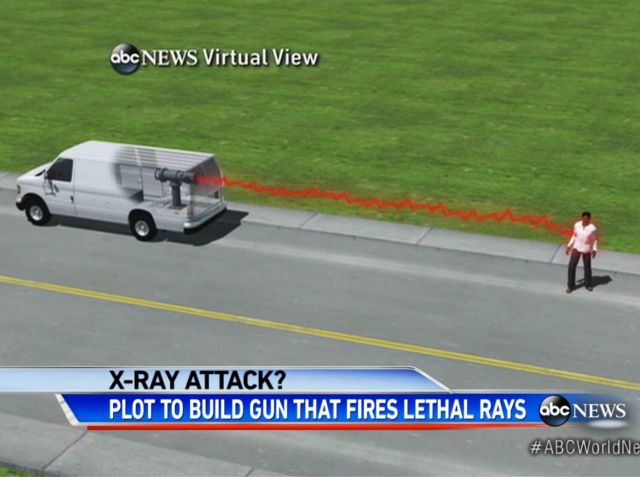 When I first heard about this case, I was living in upstate New York, and the local papers covered it heavily. My first thought was that it was another bullshit terrorist entrapment situation, where the FBI spends millions of dollars selling fake equipment to small-time fools, who then get lengthy prison sentences. God knows that's been a thing. But a closer examination reveals this preposterous plot might have actually have come to fruition. The key players had technical know-how. The equipment was commercially available, albeit expensive. If the main conspirator hadn't been such a flagrant idiot, he might have been smart enough to pull it off. 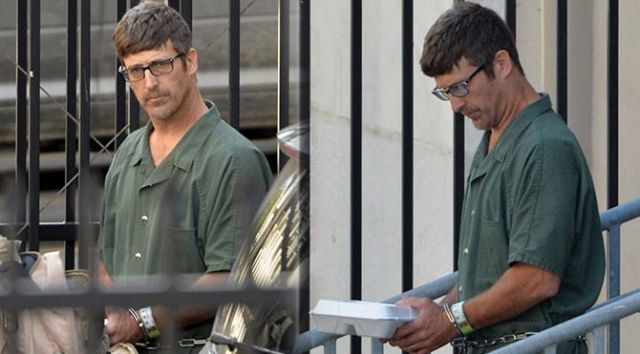 Crawford during his trial. (Photo: Sozcu)

Glendon Scott Crawford had worked at General Electric in Schenectady, New York, for many years before he became the first American convicted of plotting to make a radiated weapon of mass destruction. His rap sheet was clean. He was the father of three kids. There's no one on the record claiming that he was a pillar of the community but there's also no evidence that he was involved in anything out of the ordinary.

Except for one thing. Crawford was a total racist.

As detailed in court documents, Crawford bragged to supposed friends (actually FBI agents or confidential informants) about his longstanding membership in an upstate arm of the Klu Klux Klan. In taped FBI calls, he spouted off particularly ugly rhetoric about Muslims—people he called "medical waste" in his twisted, lame attempts at speaking in code over burner phones. Obama's America was also on the agenda. It's hard to say where his anger came from. G.E. did announce 400 layoffs in 2013 at the plant that Crawford had worked at before his 2012 arrest. Was it possible that Crawford was voicing a Trump-like frustration about the economic decline of white male workers?

Who knows. What we do know is that when Crawford began dialing random Jews in 2013 with his idea of putting a detonator on a giant x-ray machine and making it into a kind of dirty bomb, it wasn't as crazy an idea as it sounded. 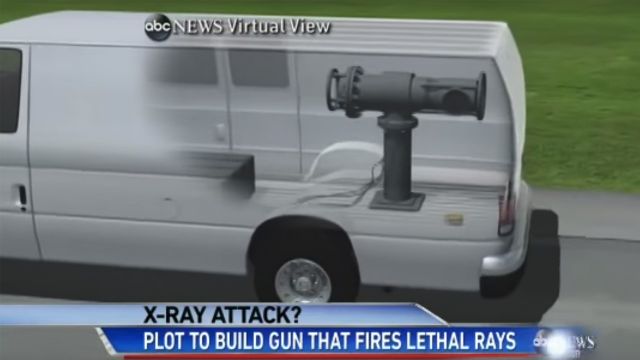 The device would be concealed and its effects invisible. (Photo: Screenshot)

The device Crawford had in mind was supposed to work like this: you could turn on this giant radioactive ray (an industrial size x-ray machine) from almost half a mile away, by remote. It would be silent, invisible, hidden, causing people pain with little obvious source to trace. Crawford's machine had three components: a big source of ionizing radiation, a power source for the device, and a remote control. The radioactivity emitted would theoretically have the power to silently sicken and kill many in its path, over days or months after exposure. (It's hard to be precise since the plot only got as far as building a detonator and paying for an x-ray machine, not melding them together. Also, a lot of the evidence and trial transcripts were sealed.) Much of the correspondence that the FBI recorded dealt with technical specifications. Crawford and his accomplice both worked in mechanical engineering; both had some degree of familiarity with industrial machinery. And Crawford, the clear ringleader, often bragged about bringing in "assets" to supplement his technical weapon-making ability. He had even scouted out some targets: an upstate mosque and a Muslim school.

Fortunately, Crawford was just too damn dumb to not realize he was being set up. He also had a helper, Eric Feight, who seemed a little less enthused to create a racist new method of mass destruction.

Here is the rough chronology of events, taken from the FBI indictment:

April 2012: Crawford first walks into a synagogue—a self-described Klansman literally walks into a synagogue asking if anyone wants a death ray to kill Muslims. No takers. Then, later in the day, he calls an upstate Jewish group with the same offer of "off the shelf" technology that would make people "die in their sleep". His name is officially entered into law enforcement files.

May 2012: FBI begin surveillance, pairing an informer and an undercover agent to learn more about Crawford's plan. As stated at the trial, the agents were first unconvinced that his ideas were credible threats. They hear much bragging about being a KKK member. In one meeting, Crawford brings printed out pages from Wikipedia.

June 2012: Crawford introduces his crew (all informants or FBI agents) to the idea of hiring a computer programmer to make the remote control. This will be Feight, a contractor at G.E. He gives himself a code name ("Dmitri") and later tells group to call Feight "Yoda". The two of them were "the Guild".

August 2012: Road trip! Crawford goes to the South to meet with a fellow Klansmen. He thinks he secures funding for the venture (a few thousand dollars). The Klansman has a gun charge, so he wears a wire in exchange for leniency.

October 2012: Again, Crawford makes a trip to North Carolina to meet with more FBI agents and confidential informants about securing money and material assistance for his machine. The focus is building a working detonator with Feight to create a "functioning, lethal and deployable radiation device emitting device".

December 2012: Crawford and Feight continue plotting to make the remote device. They also constantly fight over who would pull the trigger; neither seems really eager to do so, despite a stream of hate speech. Also, Crawford discusses replaces Feight who seems to be slacking on his work.

January 2013: "I am in this for my kids." Crawford still hasn't got the device from Feight.

April 2013: Still no device. Feight blames the delay, twice, on his phone losing all of his voicemails, then a "start-up from Hell." Endless back and forth on state of different parts orders.

May 2013: First successful test of remote control at a hotel in Albany. Works at a distance of .4 miles. "Glad I met you guys," Crawford told one of the FBI agents, "We are going to drive a stake through their heart.

June 2013: Crawford and Feight are arrested.

Tried separately, Crawford and Feight both protested their charges. Feight claimed that he was only creating a remote detonator for a "medical waste" device, although that was Crawford's well-established preferred nomenclature for Muslim people. Feight, who also had no record, was sentenced to eight years in December 2013, and is expected to serve six. Crawford was convicted in late 2013 as well, although his sentencing has been delayed well into this fall.

Could these two (and other potential collaborators) have made a death ray? It's only possible, not certain. But the U.S. is worried about the possibility that someone will. Feight and Crawford remain the only people convicted of violating Congress's 2004 "dirty bombs" law specifically calling out radioactive material as a weapon. One of the FBI agents was the head of a Weapons of Mass Destruction squad, oddly (and conveniently) headquartered in Albany.

But perhaps the most telling part of the whole ordeal is that Crawford didn't just see his mission on racist and ideologically motivated terms. He also saw it as a business—a start-up, a piece of disruptive technology. "You know everyone involved understands the marketing costs at stake here," he told an undercover agent in April 2013, as he and Feight were getting ready to test the first phase of their device. He had taken the day off work to do some "big research" on the financial implications of their invention.

"From a marketing standpoint, as far as I can discern," he said, "we will be all alone."

That's all for this week, folks!