VENICE — Damien Hirst is staring into the eyes of a jade Buddha, its face seemingly abraded by the vestiges of time. "I think he looks damn good, considering he's 2,000 years old," he said, straining to keep a straight face. Nearby, the sculpture of a pharaoh fashioned from blue granite and displaying a gold nipple ring bears an uncanny resemblance to Pharrell Williams.

Is the face really that of the singer? "You could say that," Mr. Hirst responded. "It's all about what you want to believe."

After years of uncharacteristic silence, this artist known for his love-it-or-hate-it artworks is orchestrating his own comeback. On a recent morning, dressed all in black, Mr. Hirst could be found in the soaring entrance of the Palazzo Grassi watching his crew put the finishing touches on an extravaganza worthy of Cecil B. DeMille — his first major show of new work in 10 years. Opening to the public on Sunday, April 9, and called "Treasures From the Wreck of the Unbelievable," it is an underwater fantasy, with sculptures like the Buddha and hundreds of other objects fashioned to look as though they were antiquities dredged up from the bottom of the sea. The works will fill the Palazzo Grassi and the Punta della Dogana, two museums run by François Pinault, the Parisian collector who is also the owner of Christie's auction house. 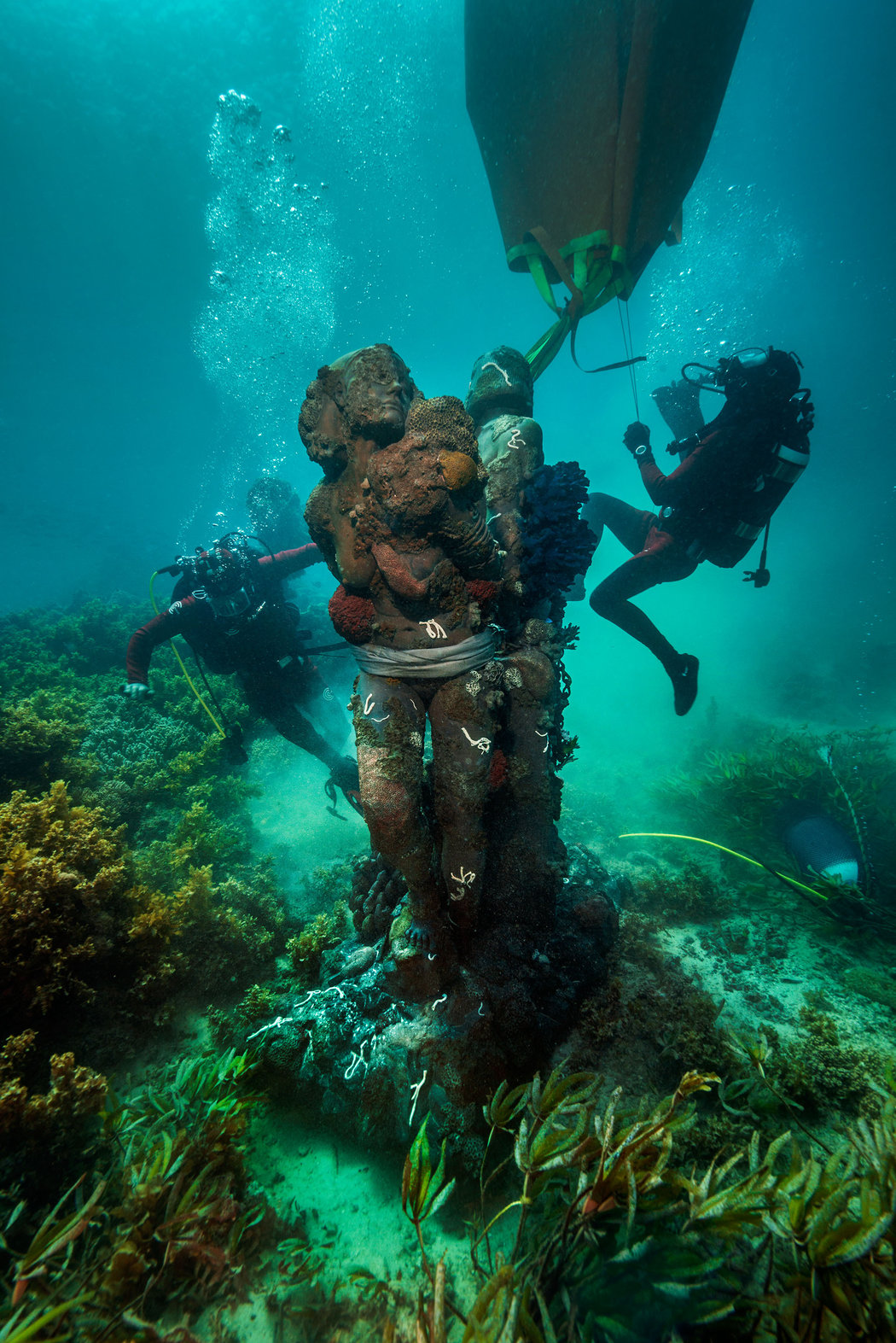 Mr. Hirst hired a film crew to shoot divers on a pretend rescue mission off Zanzibar documenting sculptures being pulled from the sea, including "Children of a Dead King."

The show is widely seen as Mr. Hirst's attempt, at 51, to kick-start his career, which has suffered since 2008, when the financial and art markets crashed. Tapping into the age-old romance of shipwrecks, he and his patron are embarking on a giant artistic and financial gamble. "Treasures" cost Mr. Hirst millions of dollars to produce and Mr. Pinault millions to present (exact figures were not disclosed by either man). Collectors who have been offered the works report that prices start around $500,000 apiece rising to upward of $5 million. With Damien Hirst's market untested on such a grand scale, the question the art world is asking is, will he sink or swim in Venice?

Francesco Bonami, a curator who organized a major exhibition of Mr. Hirst's work in Doha, Qatar, four years ago, said the latest Hirst production "goes beyond good or bad," adding: "In his bombastic, exaggerated way, Damien has created a narrative the likes of which the public has never seen. Many will call it bad taste or kitsch, but it's more than all of that. It's Hollywood."

In keeping with Mr. Hirst's reputation as a serial shocker, "Treasures" presents a visual, believe-it-or-not fairy tale rooted in mythology, theology and the artist's imagination. The story goes like this: In 2008, a shipwreck was discovered off the coast of East Africa that is said to have contained a stash of treasures belonging to Cif Amotan II, a freed slave from northwest Turkey who lived between the first and early second centuries and who had amassed great wealth. His legendary collection of art and artifacts was placed on a ship, the Unbelievable, which sank. Divers rescued more than 100 works — giant sculptures of sea monsters encrusted with coral and semiprecious stones; golden monkeys, unicorns and tortoises; as well as a goddess whose face looks oddly like Kate Moss, a marble pharaoh that resembles Rihanna and a bronze statue of Mickey Mouse, covered with centuries of marine decay. 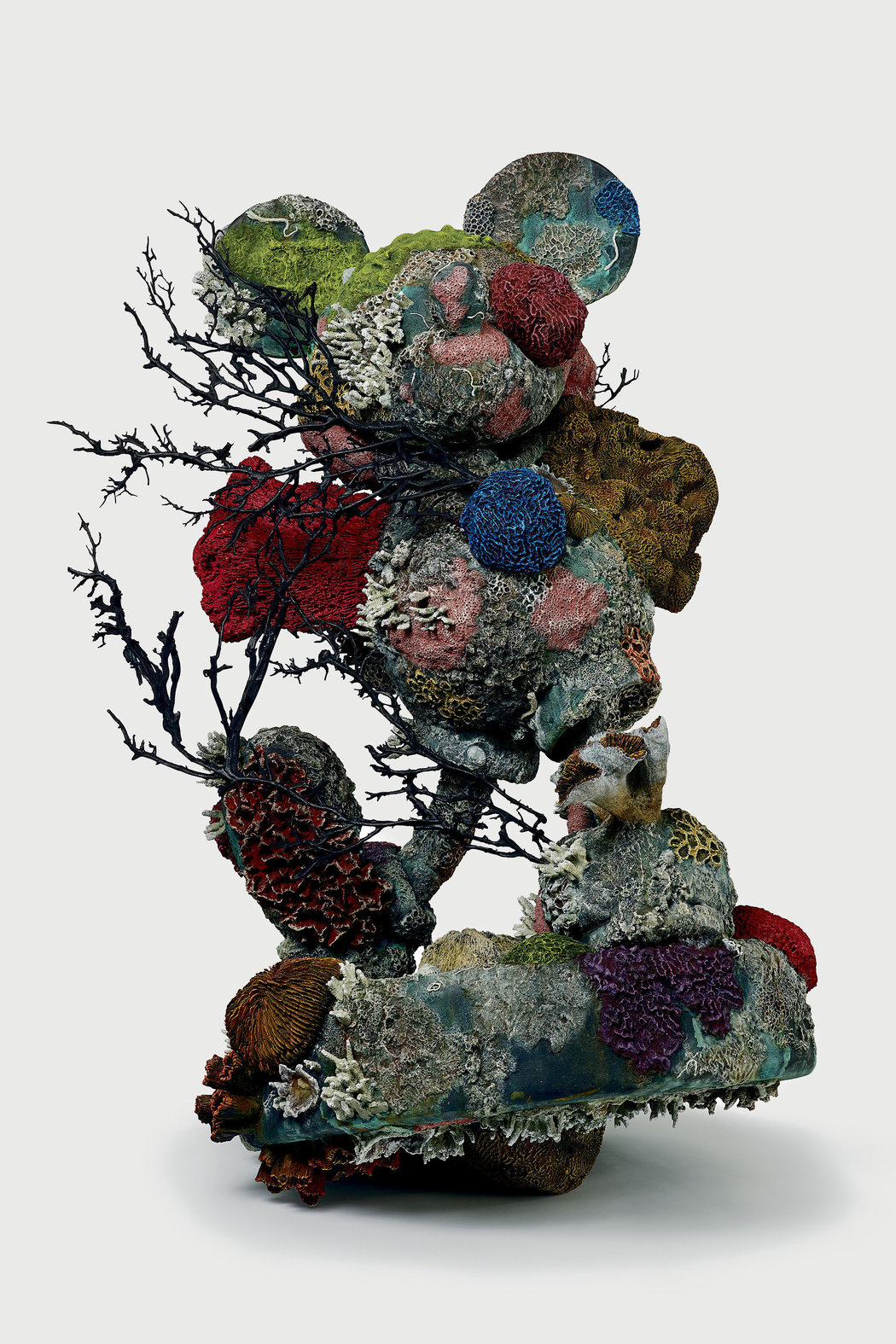 "Mickey," a bronze sculpture of Mickey Mouse imagined as an antiquity dredged up from the bottom of the sea.

Will the public — and collectors — bite? For the past month, a carefully orchestrated publicity campaign has released clues meant to lead up to the Big Reveal (the project will be on view at the Pinault Collection during May's Venice Biennale).

Some have already begun to kick up a fuss. In March, animal activists here dropped 88 pounds of dung outside the Palazzo Grassi, including a message at the museum's door that read "Damien Hirst Go Home." (The show contains neither dead animals nor butterflies, another Hirst signature.) The reason for their protest, they said, is that the exhibition is "an insult to a city of REAL art."

Still, for every critic, there is a Hirst fan. "Damien's career has been made without regard to curators or critics," said Nicholas Serota, the departing director of the Tate, which held a 2012 Hirst retrospective. "That leaves the museum world a bit nervous."

For nearly four months, Elena Geuna, the show's curator, has been orchestrating the mammoth transport of sculptures — some weighing as much as four tons — by boat, many from a foundry in Gloucestershire, England, and installing videos and countless tiny objects that fill the show's nearly two dozen glass vitrines (each vitrine is considered one artwork). All told, more than 1,000 suppliers from places like Italy, Germany, South Africa and the United States were involved in making the show.

"It's like Elvis coming back to play in Las Vegas," said Oliver Barker, chairman of Sotheby's Europe. "After more than a decade, Damien is once again allowing his work to be scrutinized by a large public, and in doing so he is definitely putting his neck on the line."

Mr. Barker has witnessed Mr. Hirst's gambles up close. In 2008, he helped mastermind Mr. Hirst's audacious attempt at bypassing his dealers by organizing an epic auction at Sotheby's of more than 200 of his works. It took place on the same fateful day that Lehman Brothers declared bankruptcy, yet Mr. Hirst still managed to sell $200 million of his work. 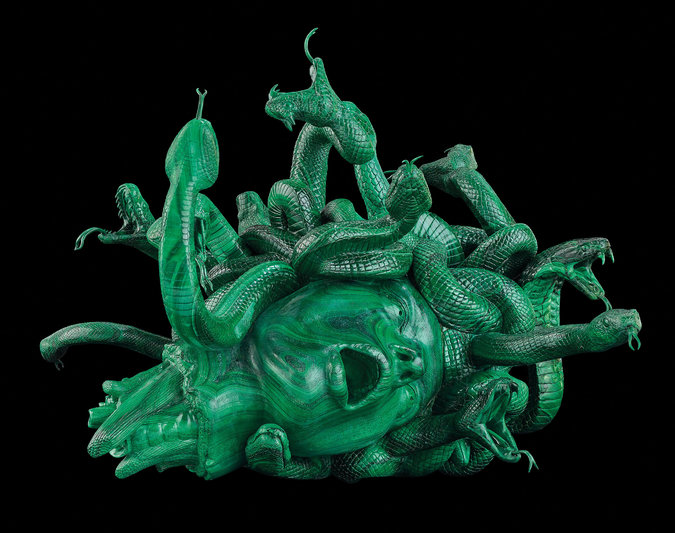 "The Severed Head of Medusa," said to be priced at $4 million.

Since then, his prices have wildly seesawed. While one of Mr. Hirst's Spot paintings sold in a Sotheby's sale in November for just $396,500 — a steep decline from the $1.7 million they sometimes commanded in 2013 — prices have been inching up. White Cube, a gallery in London, claimed to have sold a 2015 painting by Mr. Hirst, "Holbein (Artists' Watercolors)," measuring 13 feet wide, priced at £750,000 (more than $930,000), showing he could still sell at a reasonably high level.

The new work is a step up, with a severed head of Medusa said to be priced at $4 million. With the contemporary art market showing signs of strengthening, Mr. Barker called the prices "well moderated." But the monumental scale of many works may make it difficult to sell to anyone who does not own a museum-size house.

"Damien is an astonishing survivor," said Robert Storr, a curator, professor, critic and former dean of the Yale School of Art. "He'll probably produce a spectacle, but I doubt it will be of lasting interest artistically. Unlike Jeff Koons, he rarely produces surprises anymore." He added that while the public appetite for temporary exhibitions has grown, the audience for serious art has shrunk, and that the financially interested people like collectors and dealers are a very small group.

None of the new works are unique; each is made in an edition of three, with two artist's proofs. In each edition, there are three sculptures: what Mr. Hirst describes as the "Coral," meaning the work created to look like its "original" encrusted state from the deep; a "Treasure," the artwork seemingly restored by conservators for display; and the "Copy," which purports to be a modern museum reproduction of the original. 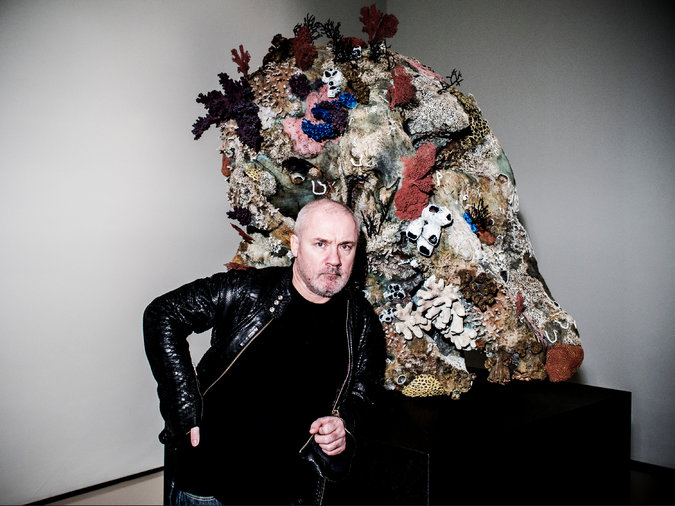 Mr. Hirst is known for his love-it-or-hate-it artworks.

It has been 13 years since Mr. Hirst's last major show, a retrospective at the Naples National Archaeological Museum. Still, he has not been totally out of the limelight. In 2015, he opened the Newport Street Gallery, a museum space in South London where he has presented exhibitions from his personal collection, by artists including Jeff Koons. Many in the art world wondered if Mr. Hirst had mellowed into a gentleman curator.

"After the Sotheby's auction and after making the skull, I started thinking of what to do next," Mr. Hirst recalled, referring to his 2007 human skull cast in platinum and covered with 8,601 diamonds, which was purchased by a consortium of investors said to have included Mr. Hirst.

He was standing in the grand atrium that is the entrance to the Palazzo Grassi on the Grand Canal, staring at the body of a monumental demon that consumes the space, its severed head replete with fangs and a serpent's tongue. "At the time I was working on my garden in Devon, which I realized was going to take 10 years," he said. "Art, like gardens, often takes time to grow."

When he talks about his work, Mr. Hirst manages a tone that is sincere but always tinged with irony. Since childhood, he said, he has been obsessed with mythology. "I came up with the title first," he recalled, and then invented the tale, including the protagonist, Amotan, the collector whose bronze bust seems to resemble the face of the artist himself.

Stefan Edlis, a Chicago philanthropist who has been buying Mr. Hirst's work for decades, said, "The first time I had an inkling Damien was up to something was eight years ago, when I saw the Medusa's head in his studio." So enamored was Mr. Edlis with "a brilliant fairy tale" that he bought all three versions of "Hermaphrodite," a 4½-foot-tall bronze made in 2009. 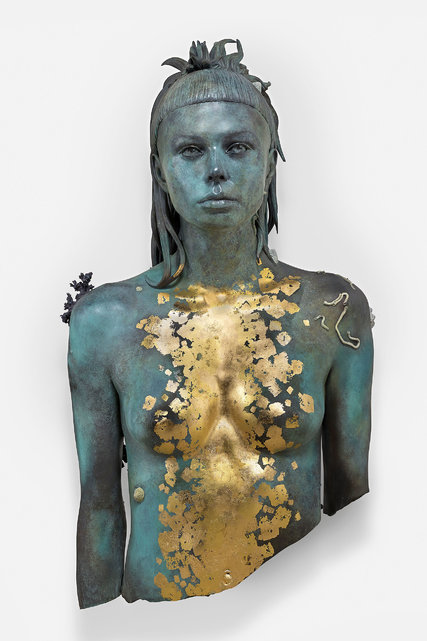 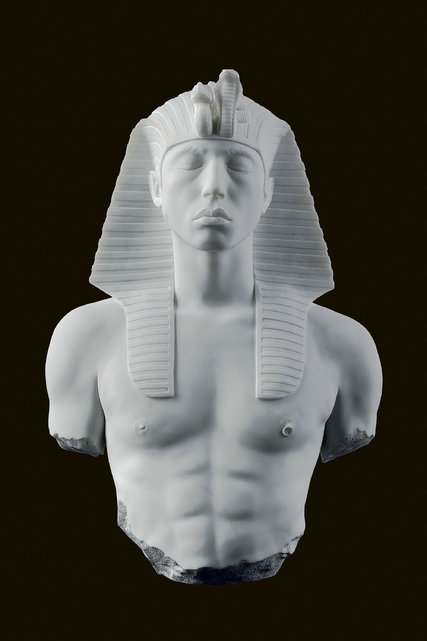 "Unknown Pharaoh" bears an uncanny resemblance to Pharrell Williams. "You could say that," Mr. Hirst said. "It's all about what you want to believe."

Mr. Edlis is one of the few collectors who have admitted making a purchase. Many art advisers and collectors are skeptical, waiting to see the works first.

For several months now, salespeople from Gagosian and White Cube, which represent Mr. Hirst, have been on what Mr. Edlis described as a "roadshow," traveling around to collectors armed with iPad images displaying all the works. These public sales efforts have prompted critics to say that Mr. Pinault is using his spaces for commercial purposes. "What can I say?" Mr. Pinault responded in a telephone interview. "I cannot avoid those comments. But this is not commercial. It's about showing the art that I love."

A 30-year collector of Mr. Hirst's work, Mr. Pinault responded coyly, when asked by email if he had bought anything himself: "Perhaps. Probably. But I am not going to tell you which ones!"

Hirst devotees will immediately see his signature themes. There are skulls and vitrines, but unlike his glass-fronted medicine cabinets from the late 1980s and '90s that were filled with drugs or cigarette butts, the new display cases hold gold coins, jewelry and "ancient" artifacts. The idea of ambiguity — is it old or made yesterday? Real or make believe? — has existed in his work throughout his 30-year career. But this time Mr. Hirst has carried his theme to its extreme, employing a film crew to shoot divers on a pretend rescue mission off Zanzibar documenting sculptures being pulled from the sea. And what to make of the unexplained references to pop culture, figures like Mickey Mouse and the vocalist Yolandi Visser, who appears as a Mesopotamian goddess?

"Believing," Mr. Hirst kept repeating. "Believing, it's different from religion. It's what we need to do today." Although he began working on the show years before "Brexit," Britain's planned withdrawal from the European Union, or Donald J. Trump became president, Mr. Hirst likes to think the exhibition reflects the world's current political mood.

"When you're an artist, everything you do you think is about the world we are living in today," he said. "And now," he added, "with all the liars running our governments, it's far easier to believe in the past than it is in the future." 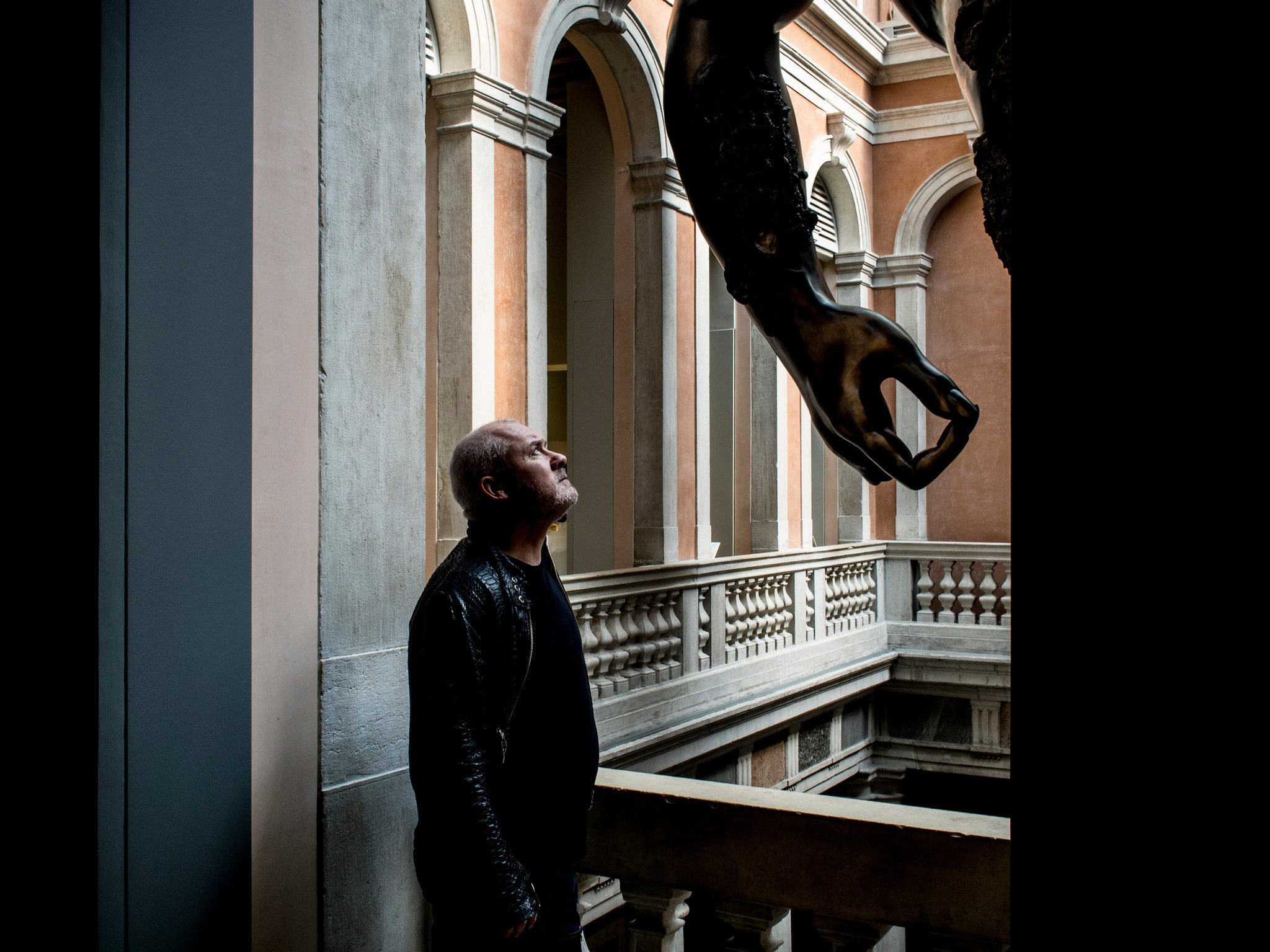 The monumental scale of many works in Mr. Hirst's new show may make it difficult to sell to anyone who does not own a museum-size house.

A version of this article appears in print on April 9, 2017, on Page AR1 of the New York edition with the headline: A Hirst Comeback Bid As Underwater Fantasy.