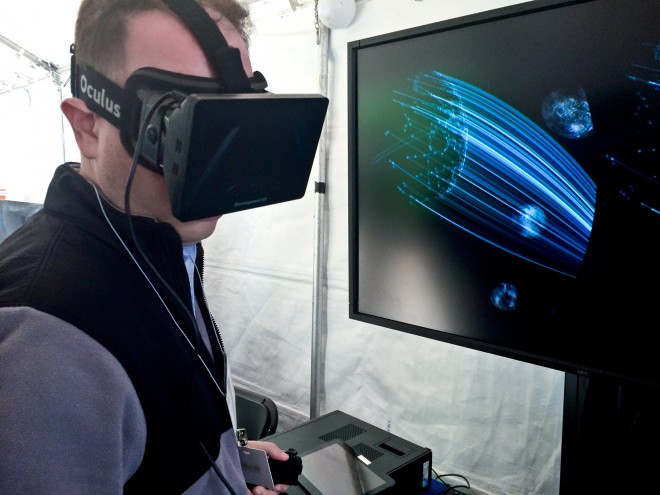 For the last two years, Darpa has been working to make waging cyberwar as easy as playing a video game. Now, like so many other games, it's about to get a lot more in-your-face.

At the Pentagon Wednesday, the armed forces' far-out research branch known as the Defense Advanced Research Projects Agency showed off its latest demos for Plan X, a long-gestating software platform designed to unify digital attack and defense tools into a single, easy-to-use interface for American military hackers. And for the last few months, that program has had a new toy: The agency is experimenting with using the Oculus Rift virtual-reality headset to give cyberwarriors a new way to visualize three-dimensional network simulations–in some cases with the goal of better targeting them for attack.

"You're not in a two-dimensional view, so you can look around the data. You look to your left, look to your right, and see different subnets of information," Darpa's Plan X program manager Frank Pound told WIRED in an interview. "With the Oculus you have that immersive environment. It's like you're swimming in the internet."

In its demo setup, complete with two motion-sensing Razer Hydra controllers for navigation, the user does more than swim. As captured in the video below showing an Oculus user's view, Darpa's proof-of-concept begins with a collection of "missions" to choose from, each of which is represented by a spherical network of computers. Select one, and you're presented with a planned series of actions to carry out–like scanning a certain network or probing target endpoints for vulnerabilities–and a collection of tools to use, represented by different abstract icons. Then you're thrown into the network to carry out the mission, while the enemy launches attacks like distributed-denial-of-service bombardments back at the user.

If all of that seems more than a little contrived, Pound admits that the Oculus demo is only a "notional" proof-of-concept, created by the San Francisco design firm Frog Design and the Austin-based simulation software company Intific. But Darpa is serious about integrating the virtual-reality headset into its plans; It's already shown the Oculus to Congress and to the Pentagon's Joint Chief of Staffs in private demonstrations, and will be experimenting further with the second developer version of the device set to be released later this summer.

If Plan X's Oculus software ever reaches the eyeballs of actual soldiers–a development that Darpa says is still years away–Pound doesn't deny that the interface would be used for actual offensive hacking as well as defense and reconnaissance. Like the rest of Plan X, he says it's meant to be a simpler and more intuitive way for the U.S. Cyber Command and other American military hackers to visualize everything they do in their cyberwar operations. "Think of Plan X like an aircraft carrier," says Pound. "It can carry any weapon system or capability."

That sort of admission will no doubt set off alarm bells for critics of the American military's increasingly aggressive posture on the Internet. The revelation in 2012 that the United States created the Iran-targeted Stuxnet malware and a year of Edward Snowden's leaks have already demonstrated that the NSA engages in more advanced cyberattack operations than practically any country on the planet. Enabling American hackers to launch those attacks with a tool that's literally designed for video games could be seen as encouraging a brazen attitude towards cyberwar, disconnecting it from the reality of its consequences.

But Darpa's Pound counters that safeguards against reckless hacking will be built into Plan X, and that it may actually reduce collateral damage from military cyberattacks by allowing soldiers to better understand the networks they're attacking.

"Say we want to turn out the lights in some place where we have boots on the ground, but it's on a subnet connected to a hospital," Pound says. "We want to war-game that kind of situation with high assurance, to be able to tell a commander that you can use this capability in this manner and you'll have a 99.99% chance of not failing…The Oculus works hand-in-hand with that war-gaming technology." 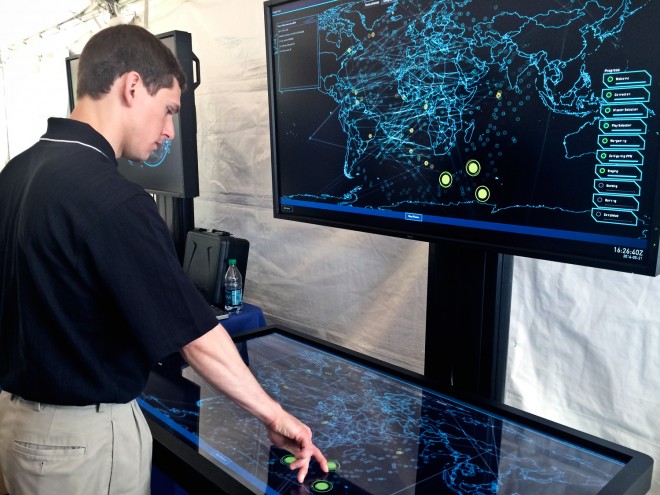 Darpa's Plan X, a massive project that includes contractor giants like Raytheon BBN and Northrup Grumman, is designed to produce new interfaces that make cyberwar operations accessible to its growing number of less-technical cybersecurity recruits. After all, the Pentagon is currently working to hire thousands of digital warriors to fill out its ranks, and many of them may not be familiar with using a command line, let alone writing code. "The genre of people that Cyber Command are working to recruit are fresh out of high school and college," says Pound. "They're going to grow up with Oculus on their head. We want to adapt to provide that kind of interface."

Plan X is set to run through 2017, and it's unlikely that its Oculus software or any other interface will be deployed before then. By the time it is implemented, Pound admits, Oculus may have already evolved into something very different. In fact, he says Darpa has already been briefed on new features of upcoming Oculus devices that he declined to describe.

But Darpa, which over the last several decades took the lead on the developing technologies like the internet, GPS, and unmanned aerial vehicles, has always been tasked with focusing on the future more than the present. Pound says experimenting with Oculus now is meant to prepare the agency for whatever it becomes. "It's Darpa's charter to take these cutting edge technologies and see how they apply to military operations," he says. "I can't predict what the Oculus will look like in a few years. But this is Darpa. We'll be ready to take it on."