This is the first thing Irish-born artist David OReilly says to me. He speaks quickly, and I almost do not catch it, but it becomes clear that this strangeness—the unfamiliarity, the absurdity of making something—is at the heart of OReilly's work. He and I are sitting in a high-ceilinged room of the San Francisco Museum of Modern Art, and next to me is a wide-eyed child roaming some frozen landscape as a lamp post. The kid is playing OReilly's latest game, Everything, and he is loving it.

As a work, Everything's primary conceit is that it allows its players to be anything. That lamp post. That tree. That boulder, that speck of dust, that atom, that planet. Across an ever expanding, procedurally generated universe, the player comes to understand their place among a nested web of interconnected things against a backdrop of lectures by British-American Zen philosopher, Alan Watts. The kid next to me continues to traverse the tundra as a lamp post.

OReilly tells me he has not always considered himself to be a game designer. With a hefty background in animation, he credits his 2014 release, Mountain, as a huge shift for his career.

Mountain is a mobile and PC game which allows players to coexist with a procedurally generated mountain. Your own personal mountain turns on a polygonal plinth in your pocket, persistently rotating, occasionally offering words of wisdom. And that's all it does. Despite its lack of traditional interactivity, the world of games latched onto OReilly's work, and found it—in the words of Rock Paper Shotgun's Alice O'Connor, "uplifting." 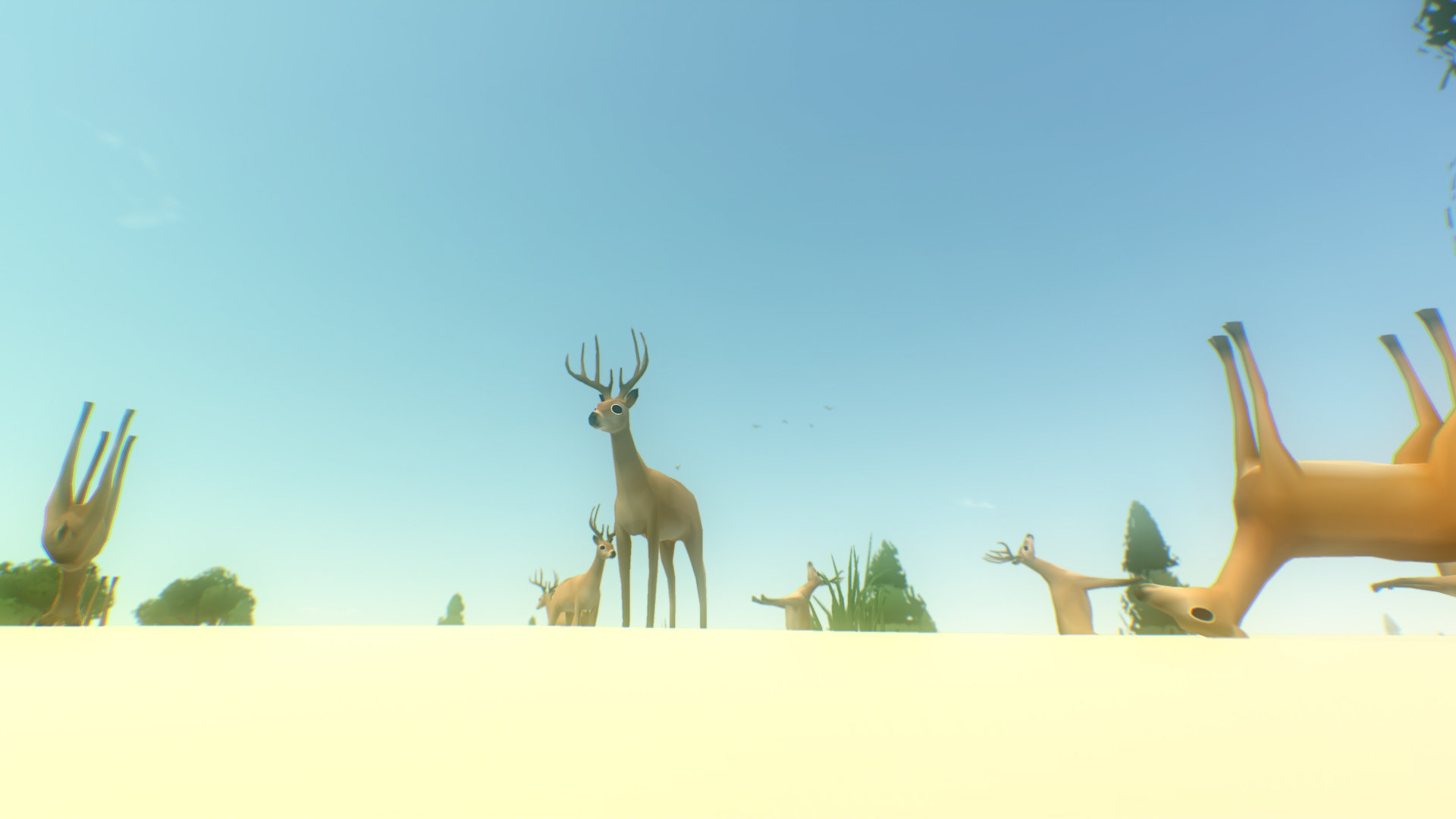 "It's so strange making a game," OReilly says. "And I sent myself into oblivion making this."

From the off, Everything, is an ambitious undertaking. It's an overwhelming idea— be everything. This, however, is its triumph. Despite the size, despite its vast, procedural everything, Everything still manages to be approachable and navigable, full of corners to call yours.

"It's huge. And I think it was partly helped by my own ignorance of what's possible," OReilly admits. "It's a scary concept for everybody. But it's an important collaboration—between me and Damien Difede. He programmed the whole thing. He also programmed Mountain, and we just took it step by step."

Taking it step-by-step is the same ethos behind Everything. With equal parts humour and awe, animals trundle across the space, musing on the universality of things. Those things in turn (as in Mountain) think thoughts. "Things know what they are, and what you are, what the weather is like, and so on. They can reference all these things, and sometimes they don't, sometimes they do. And you absorb thoughts, collected into this virtual mind. And then you generate your own thoughts, combining the thoughts that you've collected, using Markov chain logic. Which is what I think thought is. It's a feedback thing."

Everything you experience in Everything circles back around again. The earlier on you are in the game, the fewer things you've encountered, the more embryonic your own thoughts appear. The more you explore, the more you engage, the more you are able to say about the world. It is a slow build, but rewarding—akin to the way one picks up an accent, or a friend's turn of phrase from repeated exposure. You do not just inhabit this world. You become it. 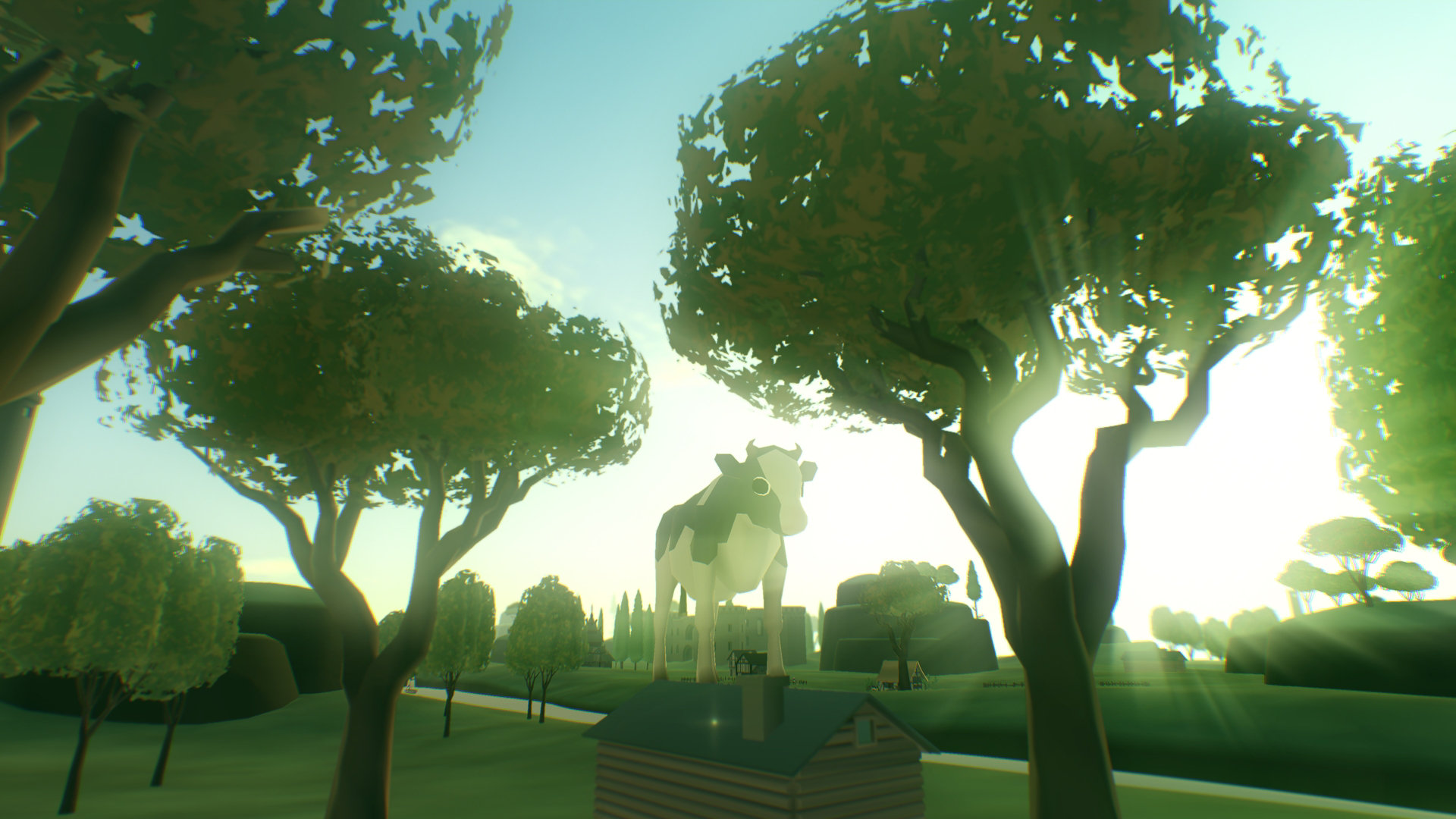 There is much to take in and much to become, and OReilly parallels the process to the way the game's soundtrack is set up. "We have this beautiful score... it's three hours of original music, it's really nice—but then we also put in those minute or two minute gaps in between, so that you can really just take in what's going on. There's always spaces between the things that let you enjoy them. I mean, that's how we enjoy anything. By the gaps in between, right?"

If you let the controller for Everything go, the game will carry on playing. Here, on this grassy knoll in front of us, a mushroom becomes a French horn, and it squawks appropriately. And then there are a pair of them. And then the game decides, instead, it would rather be a small patch of pearl barley.

By playing Everything, you change its nature, its very substance. By not playing the game, the same occurs. It is, perhaps, difficult to reconcile this autonomy of the game with the sense of ownership one feels when existing in, or altering, the space which Everything creates. This is my pearl barley, I think, Whether I have created it or not, it is not like this for anyone but me."

It is so strange to play a game.

"I think we're seeing more of this ownership with procedural generation." OReilly says. "And then we're finding out, 'How can we create meaning within that?' Because, like, the plants on the wall over there are procedurally generated. And we're not staring at them intensely. So we have to find out how to make that interesting. And what's interesting is what stands out. Or what's breaking a certain pattern."

The copy of Everything in front of us has now ensured that there are no less than fifteen suns in our solar system. After a beat, they become cans of tuna.

From cans of tuna and fifteen to infinite suns, OReilly assures me that this tactile sense of disparate things being interconnected is at the heart of Everything. "I always knew that this whole thing would be based on treating every object like the member of a flock, a part of a family of things. Even if that's buildings, or cars, or rocks, or plants. And things like flocks of birds and normal things. Fish. Things that you'd associate in a flock… If you see a flock of birds, it has a behaviour, it's doing certain things, but there's absolutely no leader to it... The whole game itself is about describing a state of reality with no Us and no Them. No We. Just I. For infinity. Everywhere." 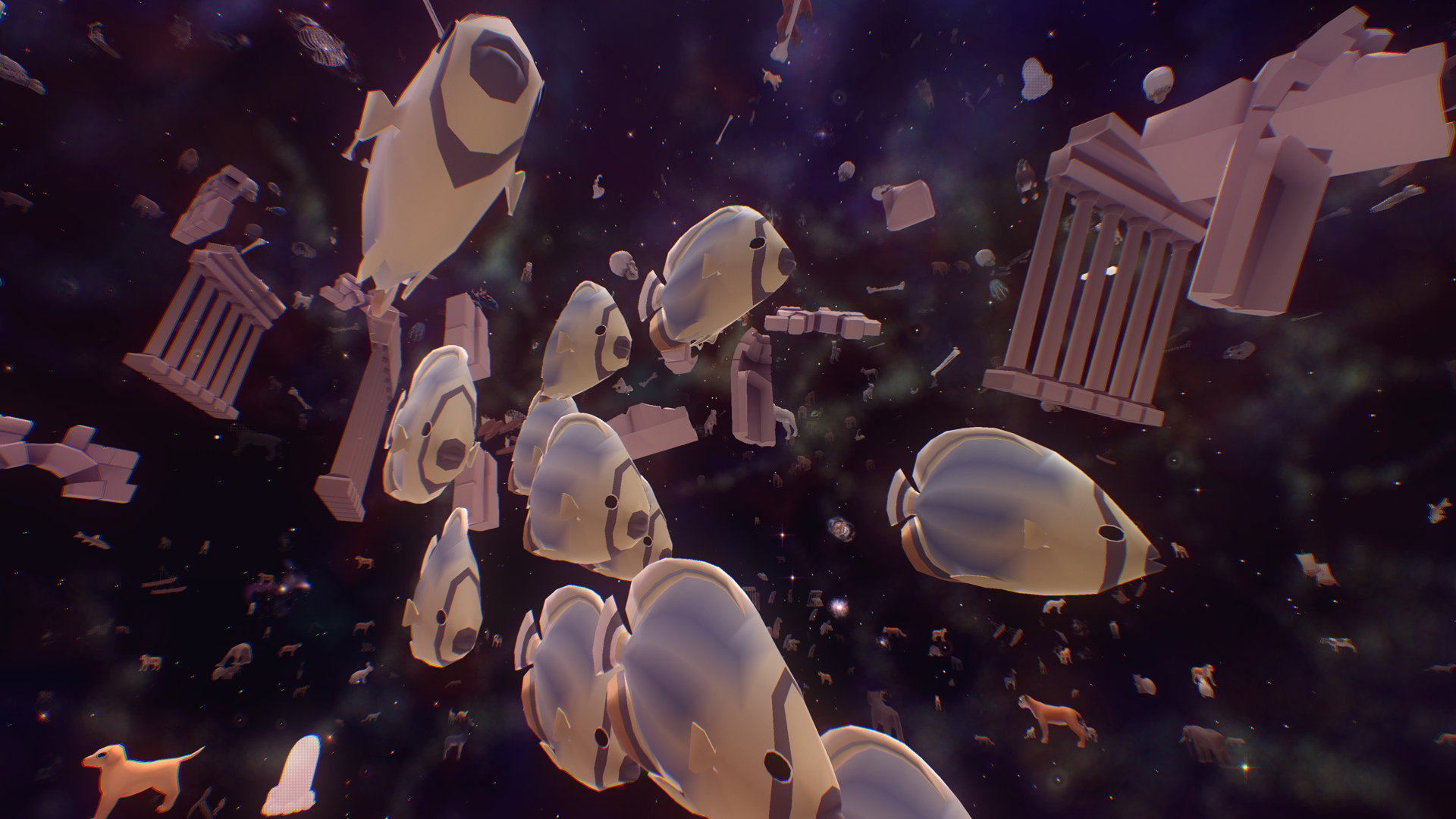 I ask OReilly how he feels about often finding himself in his own prescribed categories, at the centre of the Venn diagram between Art and Games in the eye of the public. He leans forward, and his chrome nail polish shimmers as his hand gestures get bigger.

"I think all games are art... And I think that question was answered with Pong in 1972. I think the problem is, everyone got hung up on that particular thing because they accepted the argument in the first place: 'Oh, maybe they're not.' Why even engage with that? An interesting question for me is, 'Can games be philosophy?' 'Can games be therapy?'"

Within the bright white walls of the art museum, Everything projected up on the wall, it feels hopeful to have a game ask these questions. I cannot say that I considered it might begin to answer them. People are milling about around me, and there is a meditative buzz of chatter reverberating off the walls. A festival is happening outside in a garden. I am beginning to sunburn across my shoulders.

I thank OReilly for his time, and when I get home, I download the game for myself. Here, in the quiet of my basement, I am swept away. I watch an Elk stumbling toward an expanding horizon, slowly becoming a blade of grass, and then a fleck of pollen. I become a rumbling pile of stones, a merry band of ladybugs. It is meditative. It is slow, it is forgiving. In the section of the menu called Tips, I am encouraged to simply put down the controller when I feel frustrated. There are no mistakes, I am told. Despite this, however, I soon find myself lost in a neon nebula of depressed wine bottles and space rock.

"I wish I had told her I loved her," thinks a small piece of obsidian.

"I hate myself," thinks an upright piano.

For forty-five minutes I remained entirely trapped, weighed down by this sea of miserable thoughts. I am embarrassed to admit how much these forty-five minutes affected me, desperate to just go back to the wandering patch of daisies I had been minutes earlier. I worry for my database of thoughts, that I will forever reflect my time spent here, regurgitating the poisonous thoughts of sad ruins and wrenched metal.

When I finally find myself on the other side, I am congratulated. You are everything, the screen tells me. I am exhausted. I get up and go make myself a cup of tea. When I come back, the game has set me onto a planet of green fields and blossoming trees, without my say. It seems that I am now a tree. I take a breath.

There is something comforting about this persistence, and what I allow it to mean. You are Elm, the game tells me. You are Boxwood. You are Douglas Fir. You are Juniper. I glide across the landscape, and winter turns to spring, like an affirmation.