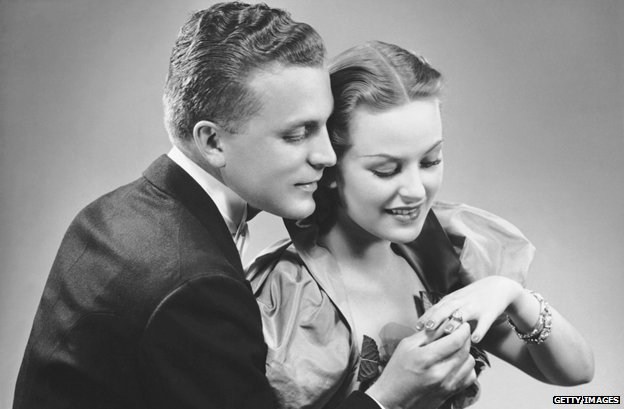 Some say you should spend three months' salary on an engagement ring. Or perhaps two. Or maybe even one. Over the years these ring-wallet equations have come to be regarded as a tradition. Why?

When actor George Clooney presented Amal Alamuddin with a diamond engagement ring reportedly costing £450,000, celebrity-watchers might have had a familiar water-cooler conversation. Did that ring really represent a month's salary?

But where did this calculation come from? Is it a real tradition that stretches back centuries?

The short answer is no. The idea was embedded in popular culture in the West by an advertising drive from the De Beers diamond cartel that started in the lean years of the 1930s. The Depression was a disaster for De Beers, which controlled 60% of rough diamond output. De Beers embarked on what it now describes as a "substantial" campaign, linking diamonds with engagement. 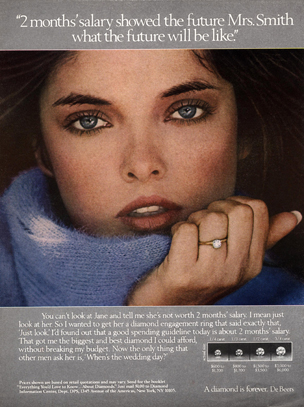 Image courtesy of the Advertising Archives

Prior to the 1930s, presenting a woman with a diamond engagement ring was not the norm. Even on the eve of World War Two, a mere 10% of engagement rings contained diamonds. By the end of the 20th Century, 80% did.

In the 1930s, at the start of the De Beers campaign, a single month's salary was the suggested ring spend. In the 1980s in the US, it became two months. One advert featured a pouting woman, a scarf, a finger, a diamond ring and the words: "Two months' salary showed the future Mrs Smith what the future would be like."

Another did away with the woman, the pout and the finger, leaving only a diamond ring against a black background and the question: "How can you make two months' salary last forever?"

As well as establishing the salary calculation, years of De Beers marketing inextricably linked the diamond to the concept of an engagement ring.

The real breakthrough was created by a team at the advertising firm NW Ayer and Son. The tagline "A Diamond is Forever" was written in 1947 by Frances Gerety. The slogan worked.

These two achievements – making the diamond ring an essential part of getting married and dictating how much a man should pay – make it one of the most successful bits of marketing ever undertaken, says Dr TC Melewar, professor of marketing and strategy at Middlesex University.

"They invented a tradition which captured some latent desire to mark this celebration of love," he says. Once the tradition had been created, they could put a price on it – such as a month or two's salary. And men, says Melewar, would pay whatever was expected because it was a "highly emotive" purchase.

Coke and Santa: The invented tradition that wasn't 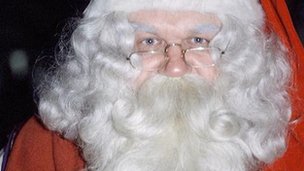 It is often said Santa's red and white robes were the creation of a Coca-Cola advertising campaign.

While there is a connection – Coke ran a campaign for 30 years featuring a jolly fat Santa – his colour scheme actually owes more to ecclesiastical vestments than a brainstorm on Madison Avenue.

The colours are widely thought to derive from the original Saint Nicholas, who was the Bishop of Myra in the 4th Century. Red and white were the hues of traditional bishop robes.

There are pre-Coca-Cola illustrations of red-and-white Santa. The Coca-Cola campaign can perhaps only be said to have helped cement the popular image.

It was not just in the US where demand for diamond engagement rings rocketed. The marketing campaign is credited with conquering Japan, where diamond rings were unheard of before World War Two. But the salary calculation was different.

In the UK, writes Rebecca Ross Russell in Gender and Jewellery: A Feminist Analysis, the advertisements kept the single month's pay suggestion. But Japanese men were urged to spend three months' salary. "The salary rules were a stroke of genius," writes Russell, who believes De Beers managed to entwine western values with the Japanese sense of honour. "A diamond engagement ring: worth three months' salary," ran one of the adverts in the 1970s. Japan remains one of the leading markets for diamond jewellery.

The idea of the durability of diamonds and therefore their suitability for engagement rings, the ultimate symbol of durability, is now totally embedded in the Western mindset. Other stones are available, says Lindsey Straughton of the British Jewellers' Association but diamonds have stood the test of time. "There have always been other stones such as sapphires and rubies which, along with diamonds, you can easily wear on your finger all of the time."

With the West largely hooked on the diamond engagement ring, attention is now on China and India, according to Bain and Company, which produces an annual report on the industry. There has been a gradual rise in Indian couples "adopting the Western engagement ring practice".

Allowing for the fact that the average US citizen – especially the younger man getting engaged – will actually earn less than the average salary (because of the distorting impact of the super-rich on salary averages) then the actual amount may come a bit closer to two months' salary.

The Magazine on diamonds 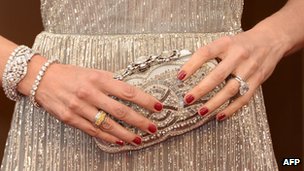 To a chemist, diamonds are a three-dimensional cubic lattice of carbon atoms. To most of us, they are the ultimate status symbol – but how long will they remain so, now that they can be mass-produced, asks Laurence Knight

In the UK, Liverpool Victoria did some research back in 2011 which claimed the "average engagement ring" was believed to cost £1,231 ($2,069) which LV claimed meant the "average man spends the equivalent of three weeks' pay on a ring".

But the "salary rule" is likely to remain, says Melewar because: "There will always be the question of who has the bigger ring, with girls comparing and boys not wanting to be outdone."