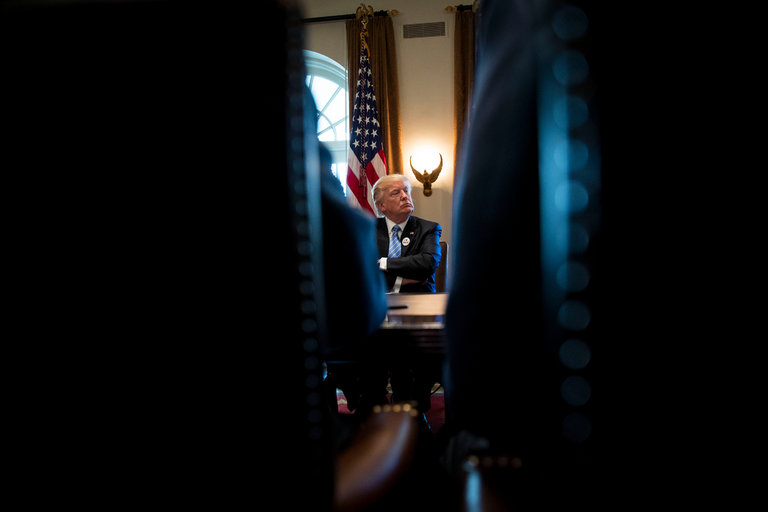 Under new pressure, some Republican deficit hawks appear ready to abandon the fiscal rectitude that they embraced during the Obama administration to help salvage President Trump's agenda.

WASHINGTON — Picking themselves up after the bruising collapse of their health care plan, President Trump and Republicans in Congress will start this week on a legislative obstacle course that will be even more arduous: the first overhaul of the tax code in three decades.

Mr. Trump's inability to make good on his promise to repeal the Affordable Care Act has made the already daunting challenge of tax reform even more difficult. Not only has Mr. Trump's aura of political invincibility been shattered, but without killing the Affordable Care Act, Republicans will be unable to rewrite the tax code in the sweeping fashion that the president has called for.

The grand plans of lower rates, fewer loopholes and a tax on imports may have to be scaled back to a big corporate tax cut and possibly an individual tax cut.

A lot of people think Mr. Trump might go for this to get an easy win.

"They have to have a victory here," said Stephen Moore, a Heritage Foundation economist who advised Mr. Trump during the presidential campaign. "But it is going to have to be a bit less ambitious rather than going for the big bang."

Because of the arcane rules of lawmaking in Congress, there may be little choice. If Republicans intend to act again without the help of Democrats, they will need to use a procedure called budget reconciliation to have the Senate pass tax legislation with a simple majority. To make their changes to the tax code permanent, their plans cannot add to deficits over a period of 10 years.

Eliminating the $1 trillion of Affordable Care Act taxes and the federal spending associated with that law would have made this easier. Because they failed, Republicans will struggle to reach their goal of cutting corporate tax rates without piling on debt. Speaker Paul D. Ryan acknowledged on Friday, "This does make tax reform more difficult."

Under pressure to get something done, some Republican deficit hawks appear ready to abandon the fiscal rectitude that they embraced during the Obama administration to help salvage Mr. Trump's agenda.

In a rare shift, Representative Mark Meadows of North Carolina, whose House Freedom Caucus effectively torpedoed the health legislation, said Sunday on ABC's "This Week" that he would not protest if tax cuts were not offset by new spending cuts or new streams of revenue, such as an import tax.

"I think there's a lot of flexibility in terms of some of my contacts and conservatives in terms of not making it totally offset," he said. "Does it have to be fully offset? My personal response is no."

The health care failure also makes the tax overhaul more politically complex as the fissures within the Republican Party have been laid bare. Mr. Trump followed Mr. Ryan's lead and lost, making it more likely that the White House will try to steer the direction of tax legislation.

"I would be surprised given the health law debacle if the Trump administration sits back and lets Congress fashion the legislation without weighing in on the substance," said Michael J. Graetz, a tax law professor at Columbia University. "That is one of the lessons that the administration will take from the failure of the health bill."

It remains unclear whether Mr. Trump and Mr. Ryan are in agreement on taxes.

Since last summer, Mr. Ryan and Representative Kevin Brady of Texas, the chairman of the Ways and Means Committee, have been aggressively pitching a reform blueprint that includes a "border adjustment tax." It would be a 20 percent tax on imports that, by making imports more expensive, would spur domestic production, they say. They think the plan would raise $1 trillion to compensate for the lower revenue that much lower tax rates would probably bring in.

Mr. Ryan and Mr. Brady are unlikely to simply hand over tax policy to the White House. Mr. Brady said on Sunday that getting rid of the contentious border tax provision would have "severe consequences" and that he hoped to produce a bill based on the House plan this spring that would be passed later this year.

Mr. Brady's tax-writing committee is expected to convene a meeting about an overhaul on Tuesday.

"We have so much in common with the Trump administration, it wouldn't make sense to have a separate tax bill from Secretary Mnuchin, a separate one from Gary Cohn, a third from whomever," Mr. Brady said on Fox News, referring to the Treasury secretary, Steven T. Mnuchin, and to one of Mr. Trump's top economic advisers. "Why not take the basis of the House plan?"

Changing the tax code affects every person and industry. Lobbyists are already hoping to shape tax legislation. As plans become more concrete, business groups will be ready to pick them apart.

Mr. Trump has at times expressed admiration for some form of border tax as a way to give an advantage to American producers. However, facing a backlash from retailers, energy companies and conservative think tanks that warn that consumer prices will soar under the House Republican plan, Mr. Trump and Mr. Mnuchin have sounded cool to the idea.

Many Senate Republicans are also skeptical, raising the prospect that Mr. Ryan's tax vision could suffer the same fate as his health plan, toppling under the weight of divisions within his party.

If Mr. Trump does try to go his own way, he could propose a tax cut plan that disregards deficits and assumes that robust economic growth will make up for lost revenue. Another idea would be reforming taxes in pieces, with a focus on reducing business tax rates first and then addressing tax rates for individuals later. Or, as Mr. Moore advises, he could try to make a grand bargain with Democrats that combines a tax overhaul with a plan for more infrastructure spending.

Mr. Trump is under added pressure not to again fail supporters who he promised would "get sick of all the winning."

"They need to cut taxes, cut spending, and build the wall," said Judson Phillips, the founder of the conservative group Tea Party Nation. "If they will do that, the base will be forever in love with them." He said he did not want Mr. Trump to get bogged down in Mr. Ryan's complicated tax agenda.

But after consuming the first two months of his presidency focused on health care, it is unclear how prepared Mr. Trump and his administration are to tackle taxes. The administration said last month that its tax plan was just weeks away, but nothing materialized. And the Treasury Department, which will take a leading role in crafting a plan, remains understaffed, with crucial policy positions unfilled and most of its leadership still awaiting Senate confirmation.

Mr. Mnuchin said last week that he was ready to get going, predicting that a tax overhaul would be simpler than health care. The fact that no one has seriously tackled tax reform since 1986 suggests otherwise.

"It's like asking whether climbing Kilimanjaro or another mountain of equal height is harder," said Mr. Graetz, who was a Treasury Department official in the early 1990s. "They are both very hard, very exhausting and seem to occur once in a generation."

A version of this article appears in print on March 27, 2017, on Page A1 of the New York edition with the headline: Dealt a Setback, Republicans Aim to Push Tax Cuts.