Indeed, said another black player on the Bills who requested anonymity to speak freely about tensions swirling with a combination of protests led by Colin Kaepernick and a combustible candidate: "I see Trump as someone who is hostile to people of color, and the fact that Rex supports him made me look at him completely differently, and not in a positive way."

Ryan declined to comment, but at least one white Buffalo player—Richie Incognito, the offensive lineman notorious for a bullying scandal that included racial slurs and who has now become a force in the Bills clubhouse—insists that Trump's winning message has resonated with NFL players like him.

"I think that he can help this nation get back to a world superpower," Incognito told B/R Mag. "Where I think he could help is putting us first again and having that—it's my mentality, too—having that tough attitude where you put America first and everyone's thinking we're the greatest nation in the world. Don't mess with America. That toughness is where I identify with him."

Interviews by B/R Mag with dozens of NFL players about Trump over the past four months reveal that scenes of a divided America sparked by the candidate have been replicated inside at least a half-dozen locker rooms of its most popular sport. Some players cite low-level confrontations. Others say friendships have ended. Many see a toughness that could cross political boundaries and a business acumen that's attractive to the likes of Tom Brady, only for the candidate's racial bluster to spark more outrage. At least one coach has insisted there be no more player discussions of Trump—not a ban on politics in general, just Trump—while on team property.

Four weeks into the NFL season and four weeks from Election Day, amid an increasingly politicized league confronting on-field protests every Sunday, a straw poll of 43 players by B/R Mag shows:

The informal survey is in no way scientific—there are some 1,600 players in the NFL—but compare those numbers to recent national polling, and the NFL locker room electorate starts to look at lot like America: 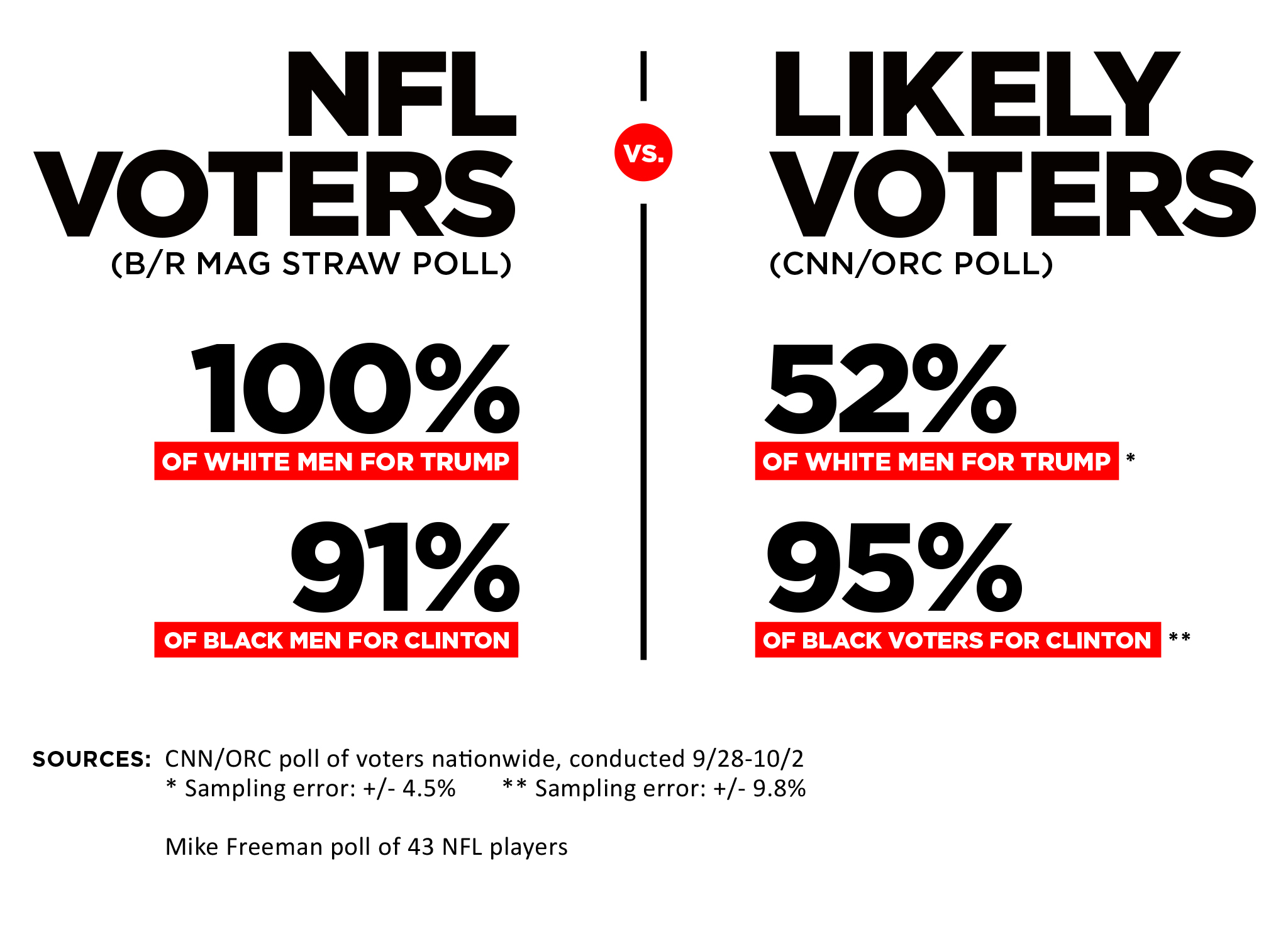 In a league that is predominantly black, but where anything-goes banter is encouraged and racial lines can be blurred, perhaps the most striking finding in the interviews over the course of the general election is what's been left unsaid. "Black guys will talk about it to each other," ESPN analyst and two-time Super Bowl champion Damien Woody said of Trump. "White guys may talk about it to each other. But I think white players will tap around it with black players.

"The locker room normally isn't politically correct," Woody said. "I know from talking to players things are different when it comes to Trump."

Woody explained that white players were hesitant to talk about Trump because "a white player may parrot something Trump says, and the black player may think, 'Oh, that's how you feel?' And it could cause problems."

Those problems are already unfolding across the NFL. In mid-May, as Trump became the presumptive nominee, two NFC teammates—a right-leaning offensive lineman and a left-leaning linebacker—began to re-examine their friendship because of Trump.

They had known each other for four years. Their wives talked on occasion. Their kids sometimes played together. They sat next to each other in team meetings and went to dinner several times per month. They often joked that politics were off-limits because of their disparate viewpoints. Then, after their first offseason team workout in May, the lineman revealed he would be voting for Trump—and everything changed.

The linebacker, a Clinton supporter, began finding excuses for not going to dinner. The families stopped talking. When the lineman confronted his now former friend, he recalls receiving a blunt response: I can't be friends with anyone who would vote for Donald Trump. I'm sorry. 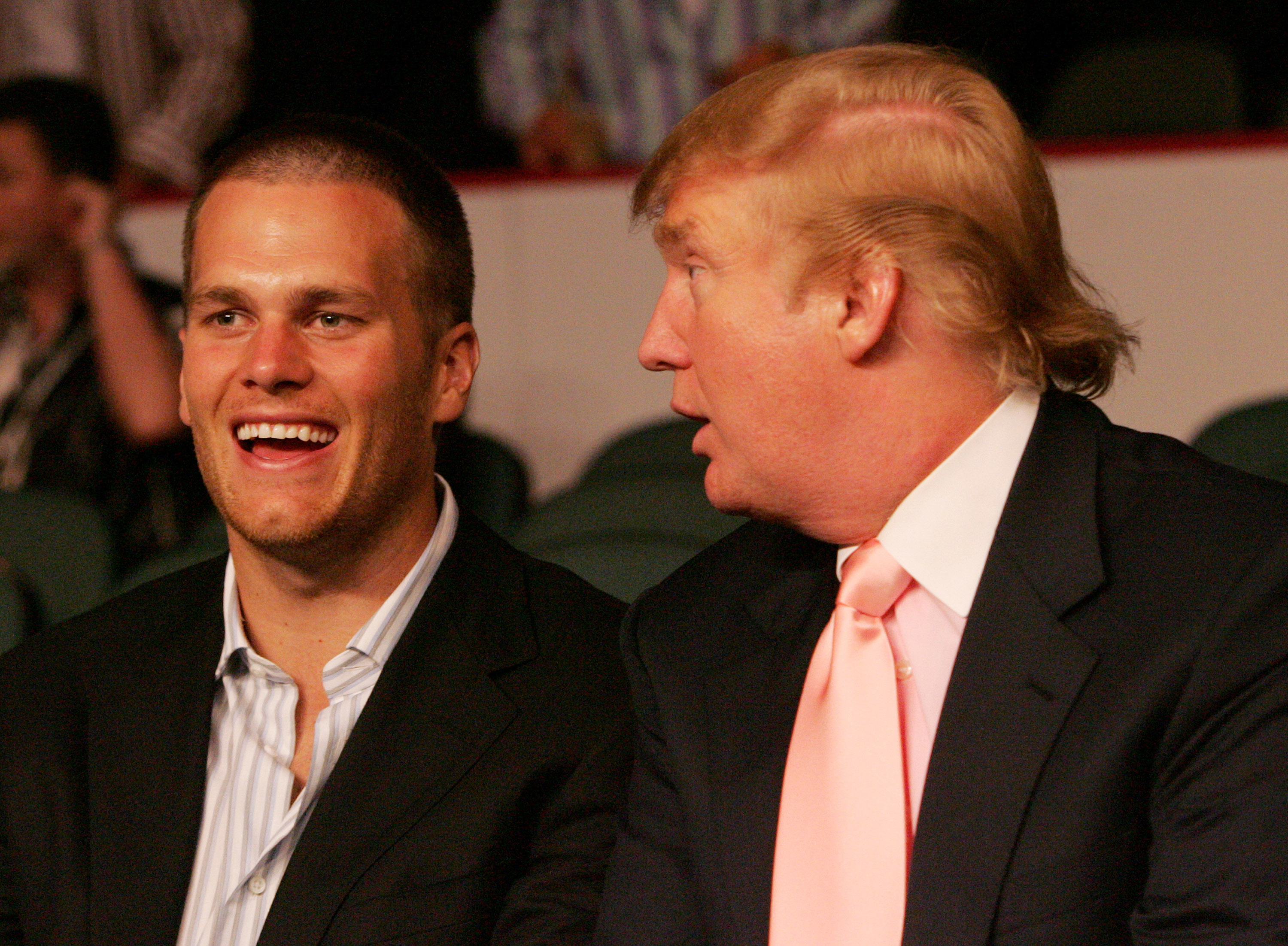 It might surprise you, with dozens of players following Kaepernick's lead in silent protest against the national anthem, but many NFL teams lean conservative. At least 40 to 50 percent of the league, by some players' estimates, believes Republicans do more to eradicate higher taxes, thus protecting more of their earnings.

Trump has supporters in NFL locker rooms for the same reasons he does outside them: Many players said they appreciated his blunt talk and supported his promises to decimate terrorists, build walls and strengthen the economy.

Trump, a sports fan, has courted athlete endorsements and bragged about friendships with everyone from Bobby Knight to Dennis Rodman. He understands the power of a football audience enough to complain that this Sunday's debate would conflict with the Giants-Packers game. When Trump couldn't get supporter Mike Ditka to speak at the Republican National Convention in July, he asked former quarterback Fran Tarkenton instead.

Then there are the New England Patriots: Trump is friends with owner Robert Kraft, got former Pats defensive lineman Fred Smerlas to help raise money in August and counted Matt Light among attendees at a Massachusetts fundraiser on the same swing. And of course there is the quarterback, Trump's golfing partner who kept a MAKE AMERICA GREAT AGAIN hat in his locker and whose support the candidate credits with making "an incredible difference" in a primary victory. "Tom Brady is a great friend of mine," Trump told the New York Times. "He's a winner and he likes winners." 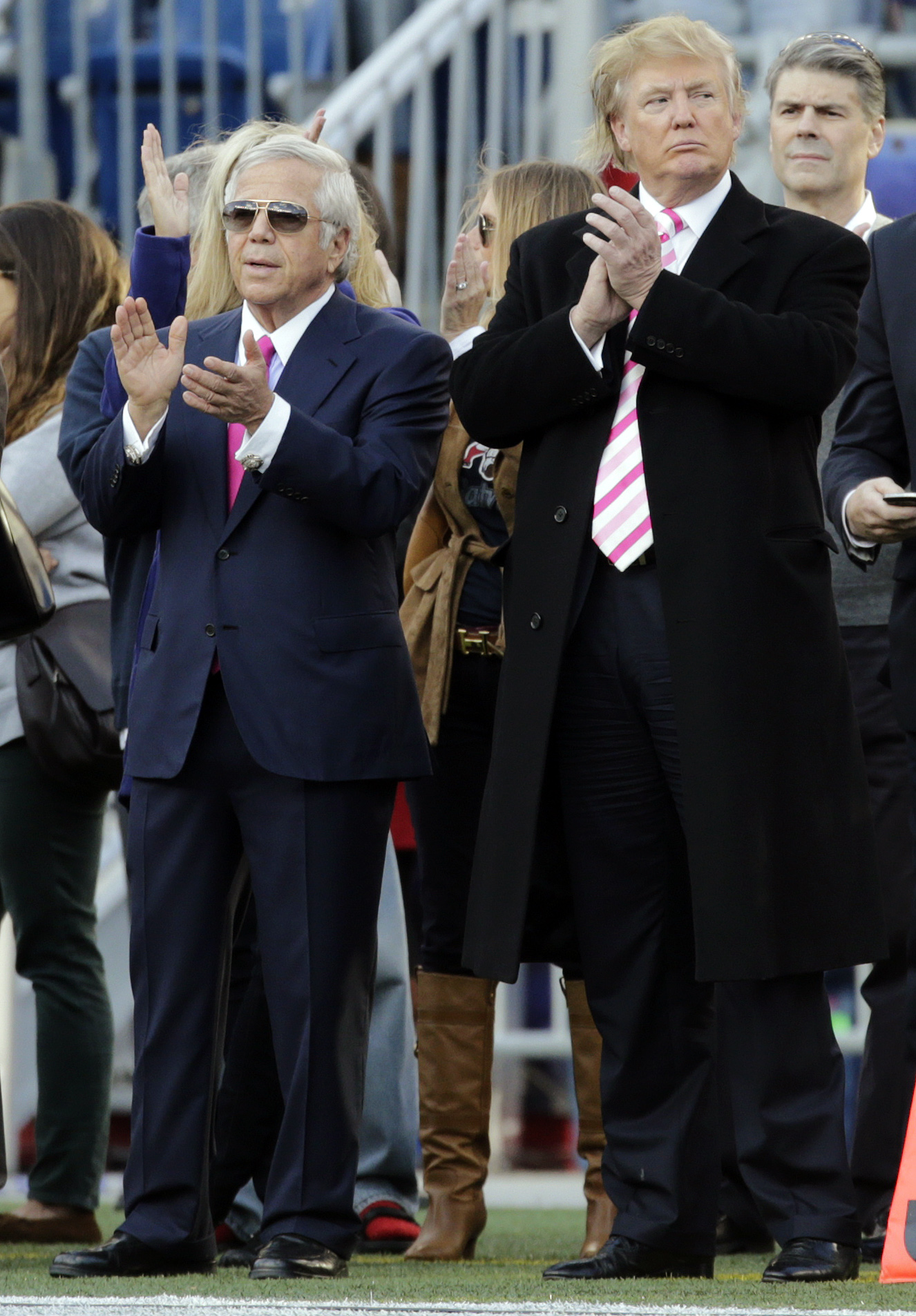 New England Patriots owner Robert Kraft and Trump applaud on the field before a game between the Patriots and the New York Jets in Foxborough, Mass., October 21, 2012. (AP Images)

But even as NFL stars have spoken out about their reasons for kneeling or holding up a fist during the "The Star-Spangled Banner" this season, the election has yet to spill out freely into public: Every player interviewed—other than Incognito—requested anonymity to speak openly about partisan politics, citing fear of repercussions from the league, coaches, teammates and even Trump supporters on social media.

It's not that pro athletes don't talk politics, these players say—it's just that Trump is, as several NFL starters joked in interviews with B/R Mag, the most divisive figure in the league not named Roger Goodell.

Clinton can, of course, be divisive herself, but players say something is different when it comes to Trump. And that something, both black and white players agreed, is often the way the candidate has confronted race.

Black players who might otherwise back a more conservative candidate said they have abandoned Trump because they view him as anti-black. Multiple players cited Trump's embrace of so-called birtherism—the lie that President Obama isn't a natural-born citizen—as one of several reasons they dislike Trump.

Recalled another black player: "I was talking Trump and Hillary with a white teammate, and the conversation was fine. Things got a little heated when he said, 'Trump isn't racist.' I don't know how anyone doesn't see how that's just not true. We talked about that statement for two days.

"We were taking a break during practice maybe four days or so after our last conversation about Trump," the player continued. "He came up to me and said, 'Here's why Trump's not racist and Hillary is.' Then we argued for another day. It was sort of heated again."

For the most part, though, NFL players have attempted to rise above the divisiveness of the campaign, however divided their workplace environment might already have become. One starting offensive lineman said he and his teammates "discuss politics every day. We couldn't be more different and are good friends and joke about all of it."

"That's an issue with this country," said the lineman, who said he planned to vote for Trump. "We can't have conversations anymore. We are too sensitive. It's OK to disagree about things."