The punk-rock appeal of the GOP nominee 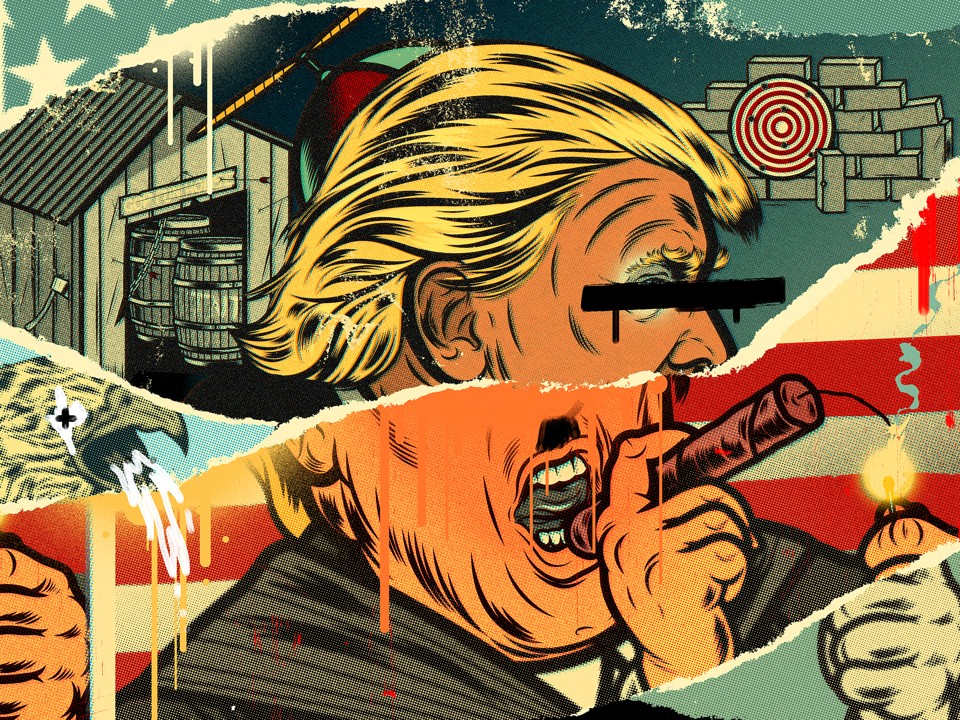 It's May 29, 1913, at the Théâtre des Champs-Élysées in Paris: the premiere of Stravinsky's ballet Le Sacre du Printemps, with choreography by Vaslav Nijinsky. A bassoon plays a brief wooing motif, then the orchestra condenses into heavy-metal downstrokes, the crouched ballerinas unbend and start bouncing like pagan robots, and boom, the place erupts. Roarings, punch-ups; someone (so goes the legend) challenges someone else to a duel. Scandalized tuxedoed oldsters are having it out with exulting avant-gardists—described by one observer as "radical Stravinskyites in soft caps."

Or try this: It's December 1, 1976, teatime in Britain, and the Sex Pistols and their entourage are being interviewed on live television. The beery drawl of Pistols guitarist Steve Jones filters louchely from the TV set: "You dirty fucker," he says to the host, Bill Grundy. Then he reconsiders: "What a fucking rotter." Gleeful giggles spread through the menagerie of punk rockers gathered behind the band. And somewhere deep in the folds of England, in a darkening living room, a truck driver named James Holmes surges from his chair and puts his boot through the TV screen.

They seem far away, don't they, these primal scenes of culture clash? Very binary. Very 20th century. Which side are you on? But imagine now that you could have it both ways—that you could simultaneously be the incensed everyman viewer and the tittering punker; the spluttering theatergoer and the soft-capped art hooligan. That you could lose yourself in a fine reactionary had-it-up-to-here fury while also fully savoring the rupture, the novelty, the aesthetic challenge of the moment. That would be something quite new. That would be irresistible. And that's what Donald Trump has been doing for his fans.

Trump can't go off message, because his message is "Look at me! I'm off message!"

To be clear: Donald Trump is not Igor Stravinsky. And although, yes, he boasted about the size of his ding-dong in the middle of a televised debate (kick in that screen!), he's not a Sex Pistol either. Nonetheless, with his followers—about whom one should not generalize, except to say that most of them would rather be waterboarded than sit through an episode of Wait Wait ... Don't Tell Me!—he has co-created a space in American politics that is uniquely transgressive, volatile, carnivalesque, and (from a certain angle) punk rock. He's done it by harping on America's most conservative intuitions—"chaos in our communities," barbarians at the border—while addressing us in a style that thrillingly breaches every convention of political presentation. It's as if the Sex Pistols were singing about law and order instead of anarchy, as if their chart-busting (banned) single, "God Save the Queen," were not a foamingly sarcastic diatribe but a sincere pledge of fealty to the monarch. Electrifying!

Trump-space is not democratic. It depends for its energy on the tyrannical emanations of the man at its center, on the wattage of his big marmalade face and that dainty mobster thing he does with the thumb and forefinger of his right hand. But it is artistic. Within its precincts, the most vicious and nihilistic utterances retain a kind of innocent levity: They sound half-funny, theatrical, or merely petulant. The scapegoating and bullying are somehow childlike. This is why, so far, no political strategy has succeeded against him. It rolls on, his power grab, his wild Trumpian trundling toward the White House, because he's not doing politics at all. He's doing bad art. Terrible art. He can't go off message, because his message is "Look at me! I'm off message!"

Speaking on the hoof, in an emancipated, undogmatic way, is a fashion among today's public figures: The loosey-goosey style of Pope Francis himself has been hailed by one of his closest counselors as "a pontificate of ... incomplete thought." But nothing comes close to Trump's improv extravaganza, his unteleprompted lungings, his obscenity stampede, his rhetorical vagrancy. Trump's speaking style is from the future, from a time to come when human consciousness has broken down into little floating atavistic splinters of subjectivity and superstition and jokes that aren't really jokes. At times he is in chauvinist free fall, swiping and snarling at the phantoms around him. At others, pure psychic prima materia comes bubbling up in crude lumps, clinically fascinating, as when he fantasized that Megyn Kelly was exploding with menstrual blood.

From Our October 2016 Issue 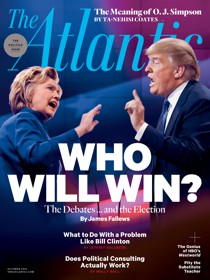 Try 2 FREE issues of The Atlantic

There are nights when Trump, in his supreme orange confidence, is quite simply the worst stand-up comedian in the world, crashing and burning, really bombing, but fiercely applauded because with every misfiring bit and linguistic collapse he is sticking it to the enemy: the critics, the ironists, the middlebrows, the gentle teasers, the ideologues of taste, them. His people love to see this, to feel this happen. For the early punk bands, not being able to play their instruments was a mark of virtue—a blow against the elites, the puffy-haired technocrats with their pointless 12-minute guitar solos. In the Théâtre des Champs-Élysées it was noted that the pumped-up Stravinskyites "would applaud novelty at random simply to show their contempt for the people in the boxes." That's what the laughter in Trump-space sounds like.

Is it frivolous to portray a genuine and expanding menace to the republic as some kind of arty iconoclast or Lord of Misrule? Obviously it is. Look at him up there, triumphant, Trump-umphant, roasting in adoration, but also—like a professional wrestling heel—accepting and enjoying the hostility, the spicy crackle of odium. He hoists his chin, he lengthens the imperial rampart of his lower lip. He makes that face, that superfrown, the glower of the autocrat. He looks like a bust that will one day be toppled in a city square.

But frivolousness, insubstantiality, has been one of the hallmarks of the Trump campaign. He doesn't mean it, he didn't say that, he wasn't serious, the transcript is wrong. He flames here and there, impossible to pin down, an ignis fatuus topped with a toasted golden ghost of a hairdo. ("A solid, solid person," he said of his vice-presidential pick, poor Mike Pence. What an insult.) I'll say this for Trump: He doesn't use clichés. He may not know any. His language, stunted as it is, is all his own. And the single cliché that the pundits have managed to stick on him—that he has "tapped into" something in this country—barely captures the complexity of his effect. For Trump to be revealed as a salvational figure, the conditions around him must be dire. Trumpism—like fascism, like a certain kind of smash-it-up punk rock—begins in apprehensions of apocalypse.

"No regrets," proclaimed Malcolm McLaren, the Sex Pistols' infamous shyster/prankster of a manager, after the swearing-on-TV incident. "These lads ... want a change of scene. What they did was quite genuine." McLaren—a post-1960s provocateur for whom the band was only ever a way to upend the culture—would have been a fantastic asset to the Trump machine, to its great political rock-'n'-roll swindle. Like the Trumpites, he saw mob manipulation as something in the nature of an artistic duty. The buttons are there to be pushed—how can you not push them? By the end, the Sex Pistols were engulfed in fabricated outrage, real violence, and corrosive self-disgust. The band's last show, at the end of a short, horrendous American tour, was at San Francisco's Winterland. A scary, disintegrating, beasts-unchained kind of a night, like a Trump rally gone south. Greil Marcus, covering the concert for Rolling Stone, saw a man in a football helmet butting his way through the crowd and—perfectly Trumpian—knocking somebody out of a wheelchair. The set concluded with an imploding version of the Stooges' "No Fun." And as the song, and the band, and civilization fell to pieces, lead singer Johnny Rotten delivered his coup de grâce: "A-haha! Ever get the feeling you've been cheated? Goodnight!"