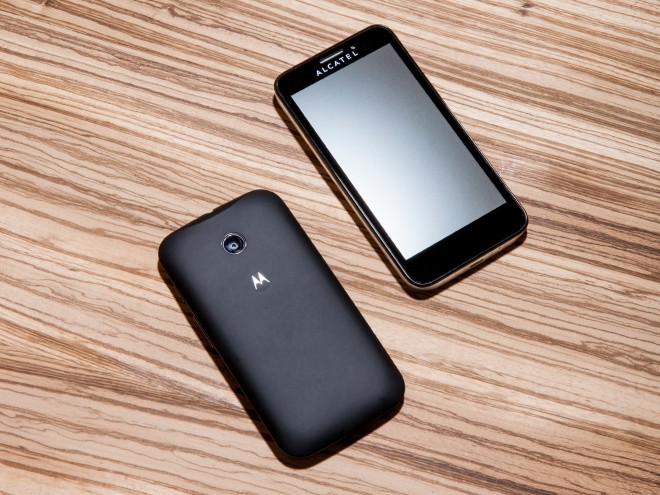 We see a lot of phones here at WIRED. Right now, for example, we've got the HTC One M8, Samsung Galaxy S5, Sony Xperia Z2, Nokia Lumia Icon, iPhone 5s and all sorts of other flagship devices. But what I'm really fired up about are a handful of cheap handsets. The amazing cheap-o handset is the new iPhone.

I've got the new Motorola Moto E in my bag and it's just amazing. It costs just $129, unlocked, without a contract. This little Alcatel OneTouch Fierce I've got sitting on my desk is amazing, too. Heard of it? Probably not. If you're the average phone-forward WIRED reader, these may fly below your radar. Yet for several billion people worldwide, these phones and ones like them are a ticket to ride.

According to Ericsson–the world's largest supplier of mobile networks and the company that probably knows more about who is using what than anyone else–there were only about 1.9 billion smartphone subscribers at the end of last year. It expects that number to reach 5.9 billion in another five years, fueled by growth in the developing world.

Great features are trickling down. What's more interesting is how cheap phones are going to trickle up.

That means for a vast number of people in a vast number of countries, the cheap handset will be the first screen, and the only screen. Their primary interface with the world. A way of connecting to the Internet where there are no telephone lines or coaxial cables or even electricity. In nations without subsidized cell phone contracts or access to consumer credit, the $50-and-you-own-it handset is going to be transformative.

We're rushing headlong into the era of cheap cell phones. The peace dividends of the smartphone wars mean you can buy a pretty amazing piece of hardware for what many people spend on lattes each month. That Alcatel has 4G, a quadcore processor, a 13-megapixel camera, and it plays 1080P video. It runs Android 4.2, which isn't completely current but isn't totally out of date either, and you can grab one for as little as $80 without a contract. That $129 Moto E ($79 if you get a contract, which you shouldn't) runs Android 4.4.2, sports a Gorilla Glass screen, has an all-day battery and is even water resistant.

Clearly great features are trickling down. But what's more interesting is how these cheap phones are going to trickle up. Put Internet-connected, app-capable smartphones running the same major operating systems the rest of us use and there will be all sorts of unforeseen ripple effects on us that we can't even anticipate.

We tend to think of the ways our technology will affect them. That's arrogant. We're the minority. It's incredibly likely that they're going to have just as big an effect on us.

WhatsApp is one example. Not that long ago, it was largely unknown in the United States. But it already had exploded in the developing world, and is still growing fast–it hit the half-billion user mark last month. That's thanks largely to a strategy of being on every phone. WhatsApp got its $19 billion payday not because of promotion in the iTunes app store–or even due to iOS, for that matter–but because of cheap handsets. It's a play for someone for whom text messaging is a serious expense.

Or consider emoji and stickers–a perfect example of a lo-fi solution trickling up to high end devices. It started in Japan with pagers, where it was much easier to send an icon than text to convey something complex. Emoji took over Japan, and then Asia, and from there little smiley faces and piles of poop took over the world.

And then there's dual SIM (or even quad SIM). It's a feature that's really popular in Asia and Latin America where people might use one network for a local call and another for an international one. That's largely something MediaTek drove, but now it's in the Moto E, which also has a feature called SmartCalling to help people set up and swap between SIM preferences and automatically configure access point names. While traditionally dual SIM has been a money-saving option for low-cost phones, it's also something incredibly useful for globetrotting business travelers, and it's easy to imagine it as a selling point in a high-end phone.

There will be weird network effects. Unforeseen consequences. Massive business opportunities. Low impact applications, ones that make great use of notifications so you don't have to gobble lots of data. Fast lightweight image and video tools are going to grow like tweens on these handsets. (And it's interesting to see that companies like Facebook are already banking on this.) I don't want to sound like I just stepped off the set of HBO's Silicon Valley, but think of the compression plays.

Even the handsets themselves are trickling up. That Alacatel handset is going to bring an Android-powered smartphone to U.S. consumers for just $80, with no contract. (And the T-Mobile pay-as-you-go plans cost about what you'd spend on a feature phone plan.) Another Alcatel smartphone, the OneTouch Evolve, retails for just $59–and it's a 3G model. Both are based on a platform from MediaTek, a Taiwanese giant you've never heard of. It makes white label handsets that operators can customize for local markets. The Fierce is based on MediaTek's MT6589 platform, and the Evolve is MT6575.

It's gotten easy to get blasé about high end flagships. The processors, cameras, screens, and, increasingly, the apps are all very, very good. We've reached the point of incremental improvements. They have parity. You basically know what's coming, year after year.

But these cheap, fast, out of control handsets are something else entirely. Something new. Something different. Something we can't really predict. And that's really exciting.