Just six blocks from
the White House, the FBI's hulking headquarters overlooking Pennsylvania
Avenue has long been the government building everyone loves to hate.

The verdict: It's an ugly, crumbling concrete behemoth, an architectural
mishap – all 2.4 million square feet of it.

But
in this time of tight budgets, massive deficits and the 'fiscal cliff,'
the 38-year-old FBI headquarters building has one big thing in its
favor. 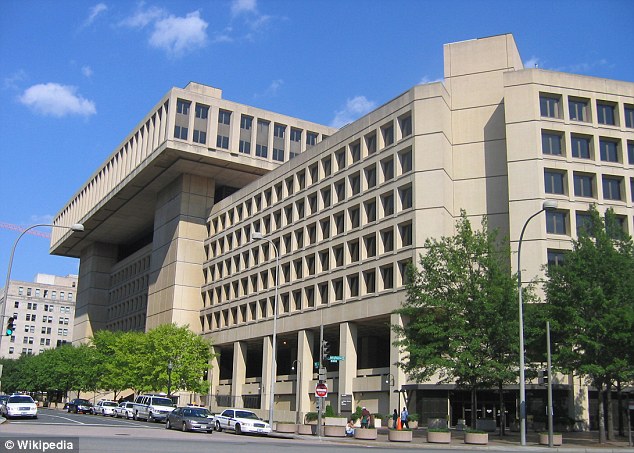 Hideous: The FBI's Hoover Building has been described as 'ugly' and 'unloved' by those who use it 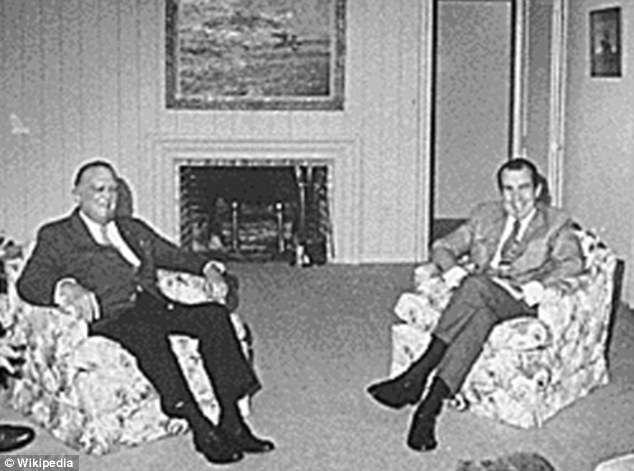 Power: Sitting here with U.S. president Richard Nixon, FBI director Herbert Hoover was considered among the most powerful men in the world during his tenure

It sits atop very valuable real estate,
an entire city block on America's Main Street, midway between the U.S.
Capitol and the White House.

Just how valuable? The General Services
Administration intends to find out.

This past
week, the agency that oversees all federal buildings issued an
invitation to developers: How would you like to build a new headquarters
for the FBI in a different location?

In exchange, we'll consider
throwing in the J. Edgar Hoover building and the underlying land as part
of the transaction.

'We're testing the
marketplace,' the GSA's acting administrator, Dan Tangherlini, said in
an interview. 'We think we have very valuable property. How much is it
worth?'

Tangherlini wants to see if it could be traded for a property
that better meets current needs.

The finish
line is still a long way off. But in perhaps seven years, according to
an estimate last year by the Government Accountability Office, the FBI
could be in a new home at a fresh location in Washington or one of its
surrounding counties. 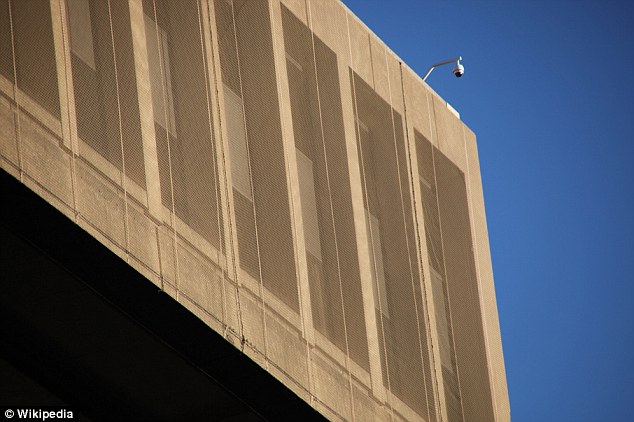 Bare: One official called the 60s fashion for buildings of barren concrete 'unfortunate'

The J. Edgar Hoover building may not be praised as architecture, but the current building has become part of American culture. Half
a million visitors a year took the FBI tour.

The bureau even met with
Walt Disney executives to see how Disney's operation handled big crowds.
People on the tour sometimes recognized faces on the FBI's Ten Most
Wanted exhibit and tipped off agents.

The tours ended when the bureau
moved its laboratory, a highlight of the tour, to its training center in
Quantico, Va.

Over the years, the building
cropped up in news broadcasts, novels, television dramas and movies. 'Arlington Road,' a fictional 1999 movie about domestic terrorists,
ended with a shot, produced by Hollywood's imaging magic, of the
structure being blown to bits by a truck bomb.

What
will really happen to the Hoover building? If last year's report from
the GAO, Congress' investigative arm, is any indication, a developer
might want to knock it down and start over.

That
report displayed photographs of concrete facing that came loose and had
to be removed from the building's exterior.

Another problem: Rainwater
runoff infiltrated the basement. Solution: The FBI jury-rigged a plastic
chute that directed the rainwater into a recycling bin.

'On
the outside, it's ugly; on the inside, it's not hideous. It's just that
horrifying world of modern sheet rock corridors,' says Hank Griffith, a
museum exhibitions coordinator who spent 15 years as an FBI clerical
worker. 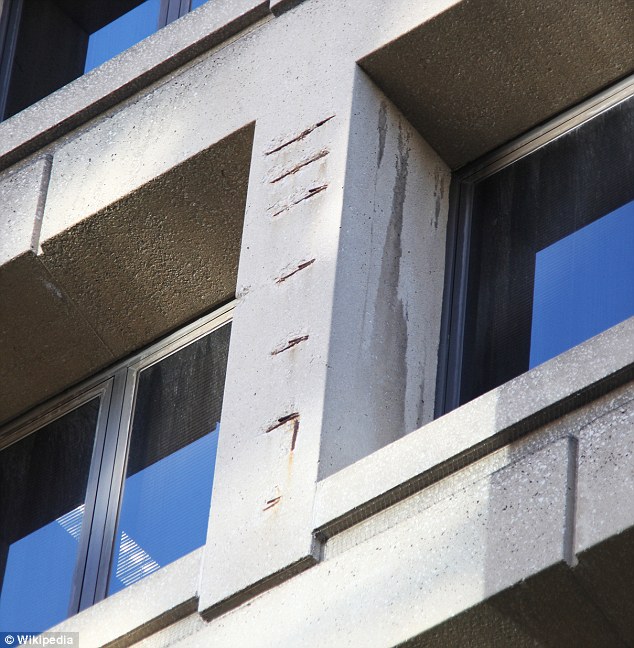 Riches: Though the building is considered ugly the land its located on could be incredibly valuable

Even trained escorts – required for visitors -sometimes got
lost.

In 1974, agents started moving into the
new building from cramped quarters in the Justice Department across the
street.

The FBI building, which cost $126.1 million to build back then,
occupies a 6.66-acre square block in the central business district.

Here's what planners have in mind.

'We
envision that if and when the FBI relocates that the site be
reconsidered for mixed use as office space with retail, restaurants,
cultural and residential components,' said Elizabeth Miller of the
National Capital Planning Commission, an independent federal agency.

That goal could be achieved by either starting over or reusing the
building there now, a planning commission document says.

Miller
cites the Newseum, which was built nearby along Pennsylvania Avenue, as
one example of what the planning commission envisions.

The commission's vision would dramatically transform the current state of affairs.

'The
building's fortress-like presence is exacerbated by security
installations, the moat that surrounds three sides of the building, the
scale of its architectural features and the absence of street-level
activity,' says a commission planning document. 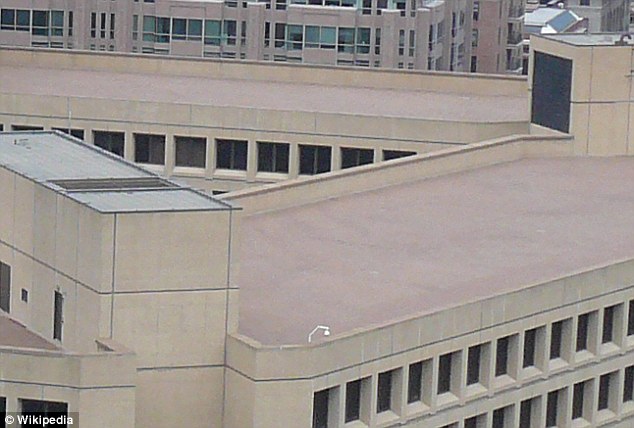 Cold: The building's original design was meant to be more welcoming but it was hardened for security reasons

"My
reaction would be rather than say `off with its head,' let's start
thinking a little more creatively," said Richard Longstreth, a professor
at George Washington University.

"I don't
think the FBI building is so important that it's worth reinventing the
wheel to try to save it, but I think if it can be saved, it should be,"
said Longstreth, director of the university's graduate program in
historic preservation.

Half a block down
Pennsylvania Avenue, the GSA has chosen Donald Trump to spend $200
million to renovate the Old Post Office, completed in 1899, as a luxury
hotel.

The FBI building is an example of
Brutalist architecture – derived from the French 'beton brut' meaning 'raw concrete,' a popular style in the 1960s and 1970s.

'That
was the fashion of the time, even though it's hard to imagine now,'
said Martin Moeller, senior curator of the National Building Museum.

'I
do think it was always an unfortunate work of architecture.'

He
said that while he likes 'some other very monumental buildings of that
era, the FBI building is ill-proportioned and ominous. It does not
create a pleasant streetscape at its base. I can't imagine I would have
ever liked it under any circumstances.'

Mary
Fitch, executive director of the Washington chapter of the American
Institute of Architects, said, 'Many people have put the FBI building on
their lists of least-liked Washington buildings because of what they
view as its harsh and overbearing design and how it deadens street life
on all four sides.'

'These feelings have
intensified in recent years as the redevelopment and renaissance of
Pennsylvania Avenue and the Penn Quarter neighborhood have made the FBI
building's forbidding, defensive design less and less compatible with
its surroundings,' Fitch added. 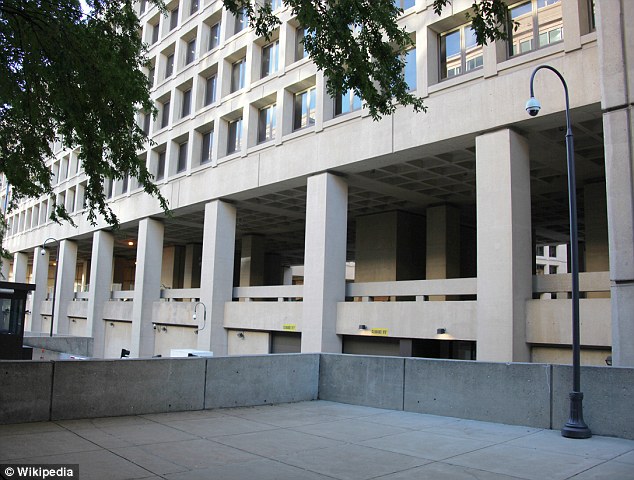 Massive: Completed in 1975 for $126.1 million, the building occupies a 6.66-acre square block in the central business district

The building wasn't originally intended to be quite so cold and forbidding.

City
planners envisioned shops and buildings with open arcades and
courtyards along a redeveloped Pennsylvania Avenue. Initially, the FBI
agreed, but the bureau's final design modified that for security
reasons.

FBI officials explained that the first floor along Pennsylvania
Avenue was closed with marble facing rather than leased to shops for
fear that foreign agents might find a way to use the shops as a base to
eavesdrop on the bureau.

The public was blocked off from the building's
center courtyard, also for security.

Across
the street from FBI headquarters is the Federal Triangle, an array of
government buildings erected in the 1930s.

These stately buildings may
not achieve greatness, but architects regard them as worthy additions to
the nation's capital. They feature limestone facades, red-tile hipped
roofs and classically inspired colonnades.

The Justice Department
directly across from the FBI is a classical revival-style building
distinguished by art deco architectural elements.

The GSA calls the Hoover building outdated and overcrowded.

The
current FBI building was designed to be a giant filing cabinet for
investigative records, a purpose now made largely superfluous with the
advent of the digital age, the GSA's Tangherlini said.

As
the FBI has shifted priorities to fight terrorism, the headquarters
workforce has increased steadily for more than a decade, from 10,000 to
over 17,000.

But many of the headquarters employees aren't working at
headquarters. Overcrowding has pushed them into annexes scattered around
Washington. In 2001, there were seven annexes. 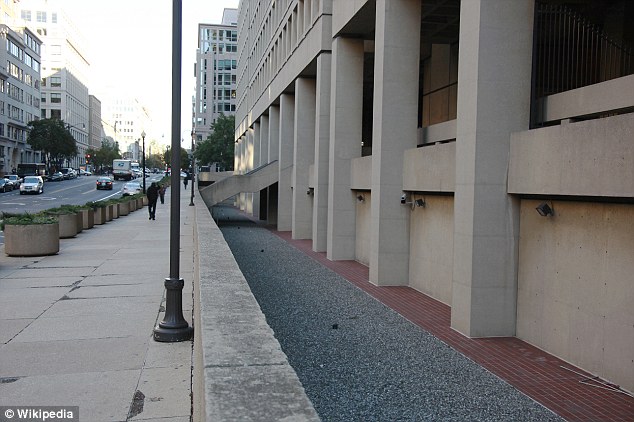 Packed: Much of the FBI's staff no longer work in the building's headquarters as overcrowding has pushed them out

Today, there are more
than 40. There are serious security issues at those locations where the
FBI must share space with multiple tenants.

Consolidation 'is urgently needed' and 'we view this as one of our highest priorities
for the foreseeable future,' the FBI told the GAO in a letter a year
and a half ago.

How far away would the FBI go to find a new home?

Officials
in Virginia's Prince William and Stafford counties say the bureau would
ease its employees' commutes by moving the headquarters south of the
Capital Beltway, the highway surrounding the District of Columbia.

Prince
George's County, Maryland, just outside Washington, is pitching its
proximity to the Beltway, easy access to public transportation stations
and the opportunity to rectify what officials there say is an imbalance
in federal office space.

About one-quarter of the region's federal
workers live in the county, yet it is home to a miniscule percentage of
federal office space.

A new home in the city
is not out of the question.

After all, FBI directors have gotten used to
making a quick trip across the street to defend the bureau's interests
in face-to-face meetings with the attorney general.