Jung-ae Gwak, left, and her daugter, Hanbyeol Lee, right, get a ticket to ride the Seoul metro. When Lee first arrived in Seoul from North Korea, she says she was bewildered by the fact that people sat directly across from each other instead of all facing the same direction. Eli Imadali/CityLab

Negotiating Seoul's subway system and living in the South can be a jarring leap into the modern world.

When Jung-ae Gwak, 64, arrived in South Korea in late 2007, she was often afraid to leave her apartment.

In Seoul, a huge metropolitan area of 25 million, people crammed sidewalks and businesses, often chatting away on cellphones as they walked. Gwak is from the North Korean city of Hamhung; there, she said, only spies had mobile phones. The crowds, ubiquitous in Seoul, felt sinister. Gwak sometimes hid in closets because she felt like someone was going to find her and send her back to North Korea.

"When I was in North Korea, so many things were restricted," Gwak said. "When you were outside, you weren't sure who was spying on you, so you always had to be conscious."

In the wake of the recent thawing in relations between North and South Korea and the meeting in Singapore between U.S. President Donald Trump and North Korean leader Kim Jong-un, perhaps no observers are more hopeful for peace than the more than 30,000 North Korean defectors who live in South Korea. Diplomats may debate the logistics of denuclearization and the lack of binding agreements from that meeting, but defectors like Gwak—whose adult son is now in a North Korean prison—are simply hoping to reunite with family members left behind. They dream of a future Korean Peninsula where anyone can travel back and forth at will.

But their personal stories also reveal the challenges that lie ahead for that future, and the struggles North Koreans will face in adapting to a world that has passed them by.

Gwak's story is a typical one among these defectors: Her husband died during "the Arduous March—the famine that killed between 1 and 3 million North Koreans in the years after Kim Il-Sung's death in 1994. In those years, Gwak sometimes crossed North Korea's border with China to get food for her starving family. Her trips across the Tumin River raised suspicions, and in 2002 she slipped across the border to escape the regime; she was sent back to North Korea several times and spent time at a detention center for defectors before escaping for good in 2007.

Like most defectors, she made her way to South Korea via China, a trip that can take years and involve a network of clandestine brokers. China actively deports defectors, so they are constantly on the run, trying to blend in to Chinese society. Many travel south to Thailand, which supports defectors, or north to Mongolia, where they can fly directly to Seoul.

The distance between the two nations may be less than three miles, but North and South Korea societies are decades apart. South Korea is a frenetic hub of modern technology and giddy consumerism; across the most heavily militarized border in the world, North Korea is a undeveloped country whose citizens suffer from intermittent power outages, widespread malnutrition, and a dearth of information about the outside world.

"One way of framing this is that coming from North Korea to South Korea is like jumping 50 years into the future in a day," said Sokeel Park, a director at Liberty in North Korea, a defector assistance organization in Seoul.

Some North Koreans who arrive in the South have little experience traveling in motor vehicles and discover that they get nauseous riding in cars.

Won Hyuk Cho, 14, left a northern province of North Korea in 2014 with his father and younger brother. He had no idea what life in South Korea would be like, but he trusted his father, who said they were going to a better place.

"It felt like it was a new world," Cho said, recalling his first interaction with the buzzing city, its tall buildings and heavy traffic. Cho still doesn't like Seoul, especially the traffic and air pollution. Some North Koreans who arrive in the South have little experience traveling in motor vehicles and discover that they get nauseous riding in cars. In Cho's hometown, motorized vehicles were only used for farming, and only by farmers lucky enough to have the money to buy them.

The leap into modernity can be jarring when you've come from a place where public transportation can mean flagging down a tractor pulling a trailer. Negotiating the ever-expanding Seoul Metropolitan Subway, which has nine lines in the city and more spreading out to the region, can be a bewildering adventure. The system carries more than 7 million passengers a day, making it one of the busiest and best public transportation systems in the world. In North Korea's capital of Pyongyang, the nation's first and only subway system has only 16 stations, two lines, and is mostly famous for being built nearly 350 feet underground in order to withstand a bomb attack. Most North Koreans have never set foot in it.

Koon Kim, 38, first arrived in Seoul as an 18-year-old. During Kim's first trip to a Seoul subway station with a group of fellow defectors, many of them huddled together, some holding on to one another for safety in the bustling crowds. He was baffled by South Koreans with long hair and ripped jeans, which was then in fashion. He thought they were all poor. "It was all different and very confusing," he said.

The number of North Koreans who make it to the South declined to 1,127 in in 2017 from nearly 3,000 in 2009, according to data released by South Korea's unification ministry. The drop was caused in part by stricter control and increased surveillance of North Korea's border with China, the ministry said.

South Korea welcomes defectors as political refugees: They're provided housing, medical care, tuition waivers for secondary education and public universities, and start-up funds to help them get established. Upon arrival, they're first sent to a government facility and questioned by the National Intelligence Service. After they gain approval to stay in South Korea, it's off for a 12-week stint in a resettlement program called Hanawon, where they are taught the life skills necessary for living in South Korean society, including how to navigate a train station or send a letter. They're also given access to job training and psychological counseling. The Korean Hana Foundation, established by the government in 2010, also runs 23 "adaptation centers" around the country for defectors who need continued assistance.

Defectors can leave the Hanawon program whenever they wish, and many leave early if they have family already living in South Korea. Gwak stayed for only one week, so she could go live with her daughter, who had arrived in Seoul five years earlier. But now she regrets leaving early, because she could have taken driving and vocational courses. She later got a driver's license on her own, but she thinks the job training would have given her more options for work. Instead, she took a physically demanding position at a box factory soon after she arrived in South Korea, with a five-hour train commute each day.

Gwak's vocational problem is common among North Korean defectors, says Sung Kyung Kim, director of research at the Institute for Far Eastern Studies, a think tank at Seoul's Kyungnam University. South Korea has a hyper-competitive educational and workplace culture—middle-school students often attend after-school cram programs in math and English that can end long after dark. Kim wants the government to offer more cultural and emotional support for defectors, in additional to educational assistance, to help new arrivals succeed. In North Korean schools, she says, the state-run education system is focused on political instruction and standards are much lower in areas like math and science. Many North Korean defectors are forced to start over. 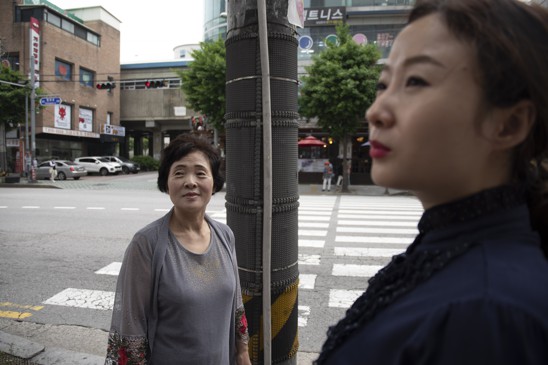 Jung-ae Gwak, left, and her daugter, Hanbyeol Lee, right, wait to cross the street while on a walk in Seoul. (Eli Imadali/CityLab)

Professional success can be elusive: Even defectors who earned advanced degrees in North Korea may have trouble finding jobs in their fields in the South. In 2016, a North Korean doctor fell to his death while working at his South Korean job—washing windows.

Though their transition to new lives can be jarring, these defectors appear united in one way—they agree that living in South Korea is far better than in North Korea.

When times were especially rough in North Korea, Gwak and her family lived in a home with walls made of corn husks and mud. Electricity could only be expected on holidays, and the television carried one state-sponsored channel. She's particularly grateful for consistent, hot running water. "All of it feels like a dream really," Gwak said. "When I think how good it would be if many people in North Korea could come to South Korea and all live well, I feel so bad for North Koreans. Living really like an animal. Worse than animals, compared to life here."

Her daughter rubbed her back while she spoke and wiped tears from her cheeks.

"How I wish reunification would come soon," Gwak said.

Sam Weber is a graduate student in the University of Montana's Environmental Science and Natural Resource Journalism program and a reporter with the School of Journalism's Korean reporting project.