A version of this article originally appeared on VICE en Español.

Jonattan lives in Soacha, a municipality just southwest of Bogotá, Colombia. The thin, dark-skinned 31-year-old works as a second grade teacher at a nearby public school who, in his free time, is a gamer, musician, and philosopher. Above all, he's a bootlegger—one who specializes in obtaining unobtainable films. He's the person you talk to when you want to buy a film that otherwise isn't available in Colombia, or that you can't find online.

If you message him on Facebook through his movie profile, named "Kine Homocinefilus Empedernidus Bergman," Jonattan will find most any title you're looking for. After procuring the movie, he leaves Soacha and sets dates with his clients in various locations throughout Colombia to deliver it to them. It's a private operation that exists between him and the individual who requested the film. It's a lucrative side hustle. 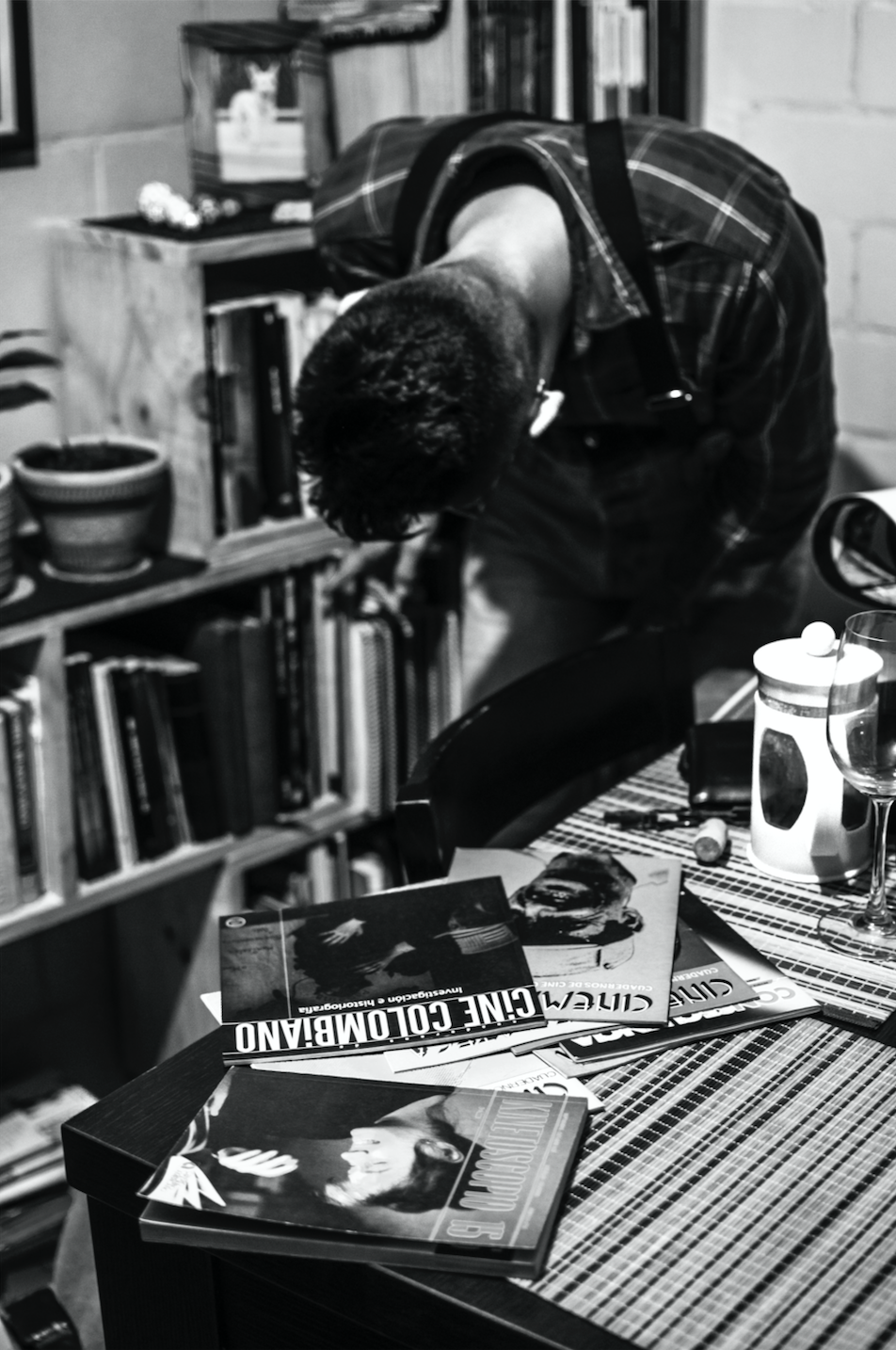 In addition to thousands of titles, Jonattan also collects specialized film magazines that he frequently receives in exchange for films.

Using cataloging software called Where Is It?, Jonattan organizes his list of roughly 30,000 titles by genre, country, year, and director so that he can easily locate them across hundreds of DVDs and multiple hard drives. Some are American blockbusters you'll only find a torrent for once you've closed out dozens of pop-up ads, but most of them are films that he, fellow cinephiles, and bootleggers have deemed "art cinema." Sometimes they're films whose copies are so scarce that only he and a small number of other people have access to them. Most of what Jonattan collects and actively searches for is of niche interest—films of which most people are completely unaware.

"There are two movements: the people who want to see the latest movies, the films that end up in the Berlin or Cannes film festivals. But only a [few] films actually make it to the festivals—like 100 out of the 10,000 productions that are made every year," he explains. He, conversely, is into things like Czech cinema or films made 80 years ago that were recently remastered. "I'm not interested in the new stuff, although I have it. Right now we've got films that are premiering in 2019."

Jonattan's love for film began 12 years ago when he began watching classics like A Clockwork Orange, or anything by Stanley Kubrick or Ingmar Bergman. Curiosity-driven internet searches led him to discover the private online film forums he still frequents today, which is where he downloads all the films he later distributes. 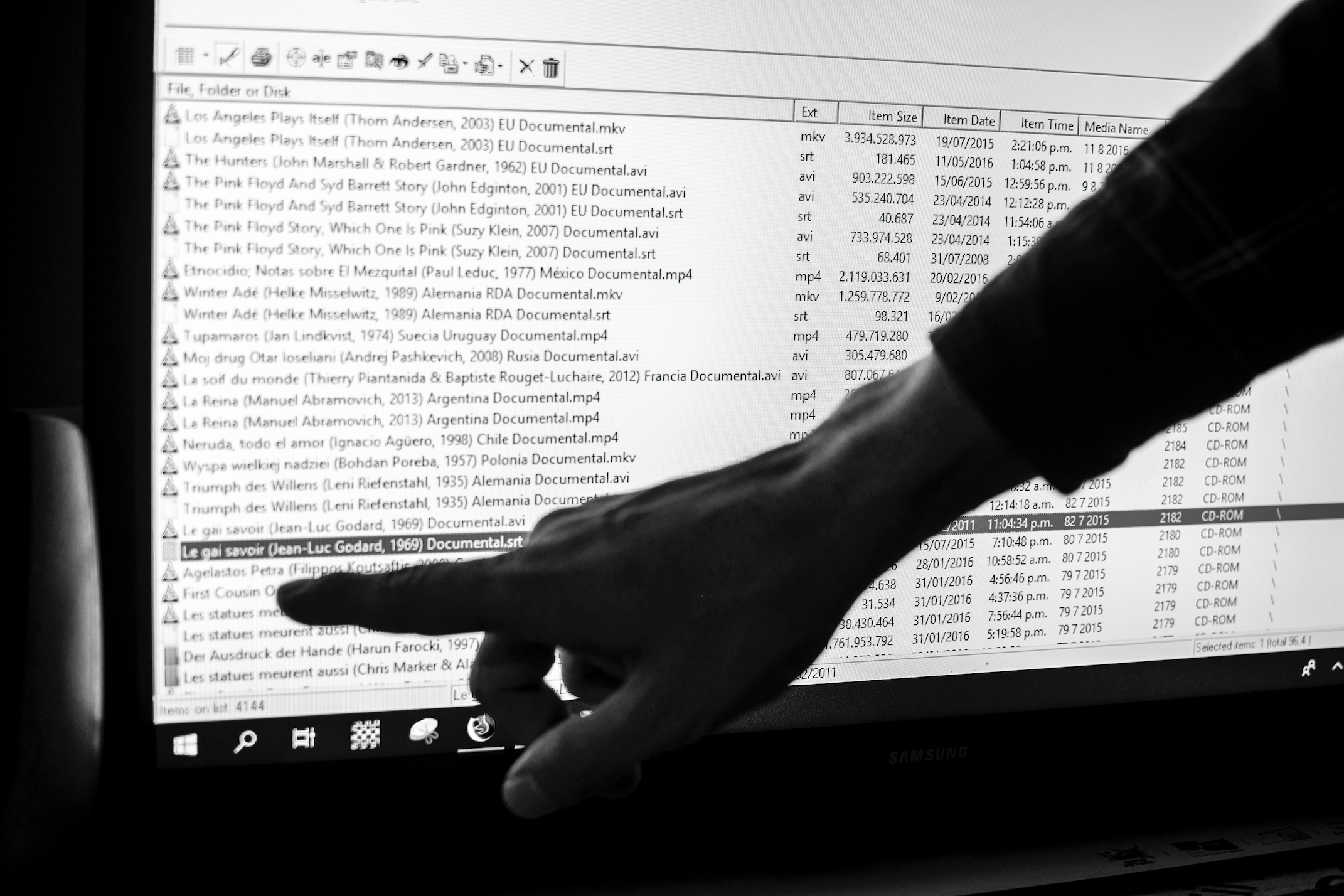 The software Jonattan uses to classify and locate his films.

Jonattan shows me one of the forums he regularly visits and requests that I not reveal its name in this article. On the landing page reads the following message in Spanish: "You need an invitation in order to register."

"We've had some problems," Jonattan admits. "Some people want to take [the site] down." He moves his mouse to hover over a drop-down menu on the right side of the page, with offerings like "feature films," "eBooks," and "short films." He clicks on the first and five "rooms" appear, each one with the name of a director and their films categorized by year. The "Fritz Lang" room features films from 1884 until 1949; the "Wong Kar-wai" room lists films made between 2010 and the present. Jonattan clicks on the latter and shows me hundreds of other sections, each one with the name of a film. He opens one called "Jesus," named after a Chilean film from 2016. On the inside is a detailed description of the film along with its trailer, the file quality, director, language, country, theatrical poster, and, most importantly, the download link. The entire forum is categorized like this, Jonattan says. The methodical approach applies to films, short films, soundtracks, cinema magazines, technical books, and scripts. This one, like the other Spanish forums, hosts around 50,000 titles whereas the English ones host close to 300,000. The most staggering are the Russian forums, he says, which host around 500,000 titles.

These forums get at an age-old tension online: can anyone draw a line between distributing essential, hard-to-find cultural relics and digital piracy? On one hand, governments and major corporations are trying to staunch the flow of illegal downloading by going after sites like MegaUpload and The Pirate Bay; on the other hand are the founders of these sites and the people who share and download files from them—people who generally believe that the internet should be a free space removed from economic and state monopolies. 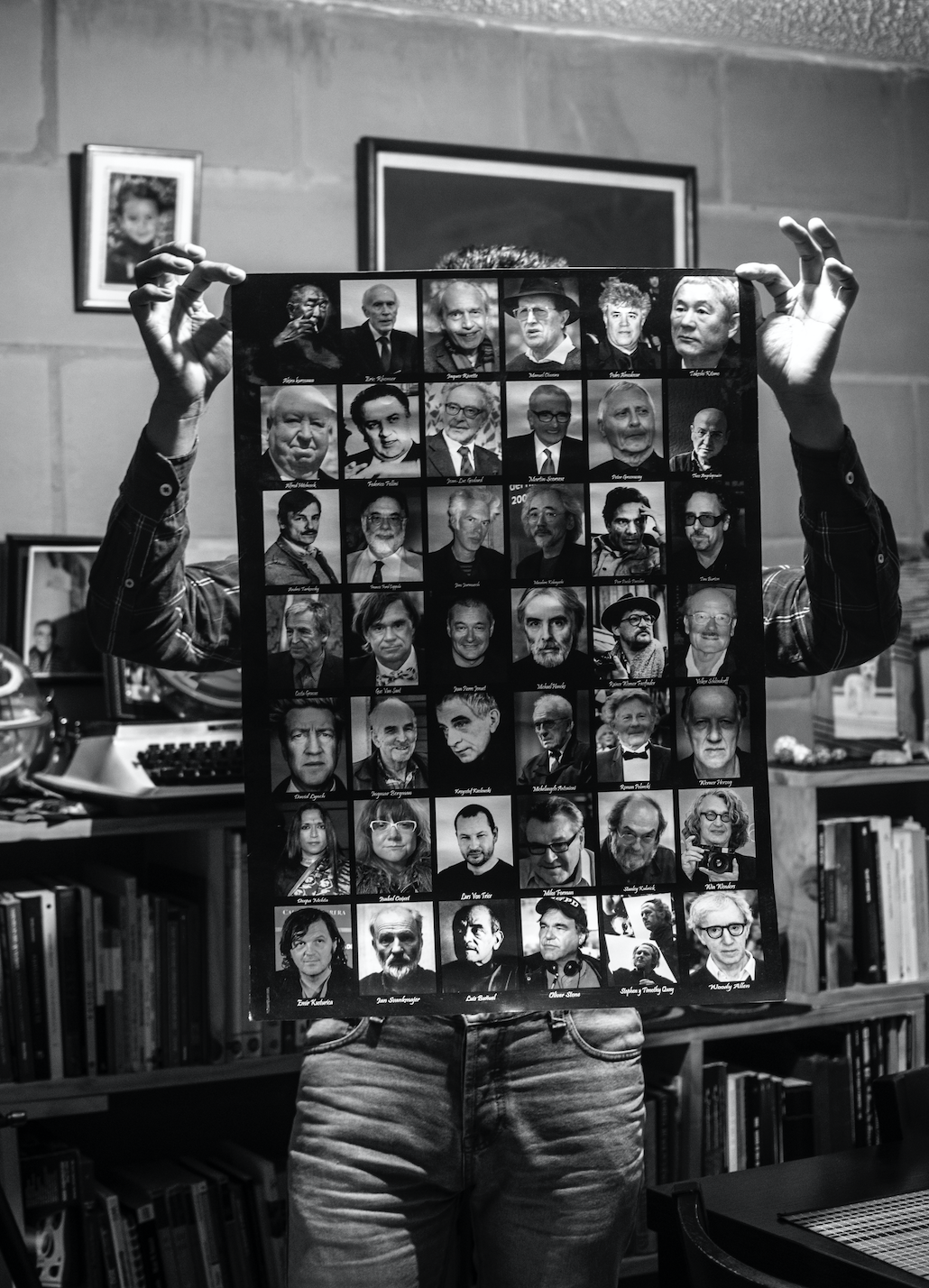 One of Jonattan's introductions to the Bogotá film scene was through this poster he designed, which features his favorite directors. Today it hangs in several independent cinemas throughout the city.

Anyone who's tried to access The Pirate Bay in the last calendar year can attest that these battles between the two groups happen all the time—that site has been online only intermittently lately. But there are thousands of users like Jonattan around the world who manage to keep their collaborative networks under the radar from the law. These forums offer a space where communities are created with a singular purpose in mind: to share and access content that should be democratized by the internet. In order to avoid being shut down, they have strict rules and membership is closely guarded to better guarantee the community's existence and the exchange of information it fosters.

One of the strictest film forums is called Karagarga, Jonattan says. He no longer has access to it: last May of this year, when he began his new job as a primary school teacher, the amount of time he had to visit the forums decreased considerably. He eventually stopped visiting Karagarga and one day, when he typed in his his user and password, he was told he'd lost access to the site.

Karagarga's strictness also extends to its content: it's expressly forbidden to upload any Hollywood films or blockbusters to the site. The site specializes in local cinema, experimental films, and rare finds.

According to Jonattan, many of the users in these forums are film directors, critics, festival juries, and academics. One of the people to whom he talks the most is a guy from Cuba who he described as a mysterious, reserved fellow who used to be the director of the Cuban Film Archive. Jonattan pays him--as requested by professors and film historians in Colombia--to find 35 or 50 mm films that only exist in the local archives that can only be found on the island. "He goes to Cuba every year and I commission him to come back with certain titles," he says. "I have to wait for a year, but we're talking about something that you know only exists over in that film archive and nowhere else."