By News from Elsewhere… …as found by BBC Monitoring 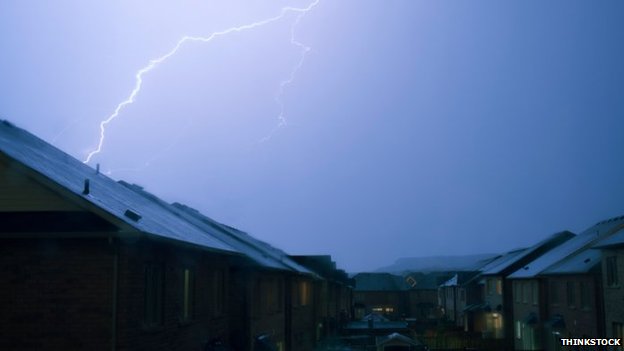 An entire family has survived being hit by lightning after a storm suddenly broke in the German city of Chemnitz.

One woman, Ricarda, says she was chopping wood in the garden when it began to rain. While she and her family were bringing their toys and garden furniture back into the house Ricarda heard a sudden, loud bang and felt "some tingling from head to toe", the Bild newspaper reports.

"There was chaos. Everybody was just acting on autopilot. A few minutes later the ambulance arrived," she says. Her nine-year-old nephew Elias fell over unconscious and had to be resuscitated by his father and grandfather on the spot. He was being treated in intensive care. Other family members, including the grandmother, Ricarda's two children and her sister-in-law, Judith, went to hospital with minor injuries. Ricarda says her son Cedrick was still complaining of a headache the following day.

Meteorologist Helge Tuschy tells Bild there was a "weak thunderstorm" in the area with more than 30 lightning strikes reported.

Use #NewsfromElsewhere to stay up-to-date with our reports via Twitter.