This article is intended for people who have seen Gareth Edwards' Godzilla.

"Let Us make man in Our image, according to Our likeness; and let them rule over the fish of the sea and over the birds of the sky and over the cattle and over all the earth, and over every creeping thing that creeps on the earth." —God

When Godzilla finally shows up in Gareth Edwards' blockbuster reimagining of the kaiju king, the first person to see the giant radioactive lizard make landfall on the shores of Honolulu isn't a person at all. It's a dog, a cute one, leashed to a palm tree and barking his head off at the prehistoric colossus emerging from the sea. We know what the animal is looking at, but don't see what it's seeing. When the ocean water begins to recede in anticipation of a massive tsunami, the dog sprints inland, snapping its leash and bounding out of frame. It returns in the next shot, with the camera following as it sprints to safety (presumably) through an anonymous throng of panicking people. That's one of the film's most telling choices, given how the tidal wave sweeps through the streets, bloodlessly erasing an untold number of human lives. The dog might escape the carnage, but it's too late for us. Godzilla is the first post-human blockbuster.

In Gareth Edwards' Godzilla, point of view is everything. Here is a $160 million studio tentpole in which perspective stomps over plot, and characters are defined not by their actions, but by their insignificance. Here is a confidently paced monster movie that eschews the "four action setpieces strung together with exposition and iced with a tease" template of contemporary blockbuster cinema. Edwards devotes the film's first hour to the deepening tragedy of a single family, and builds to an unspeakably spectacular climax that's less dependent on what we're seeing than on how we're seeing it. 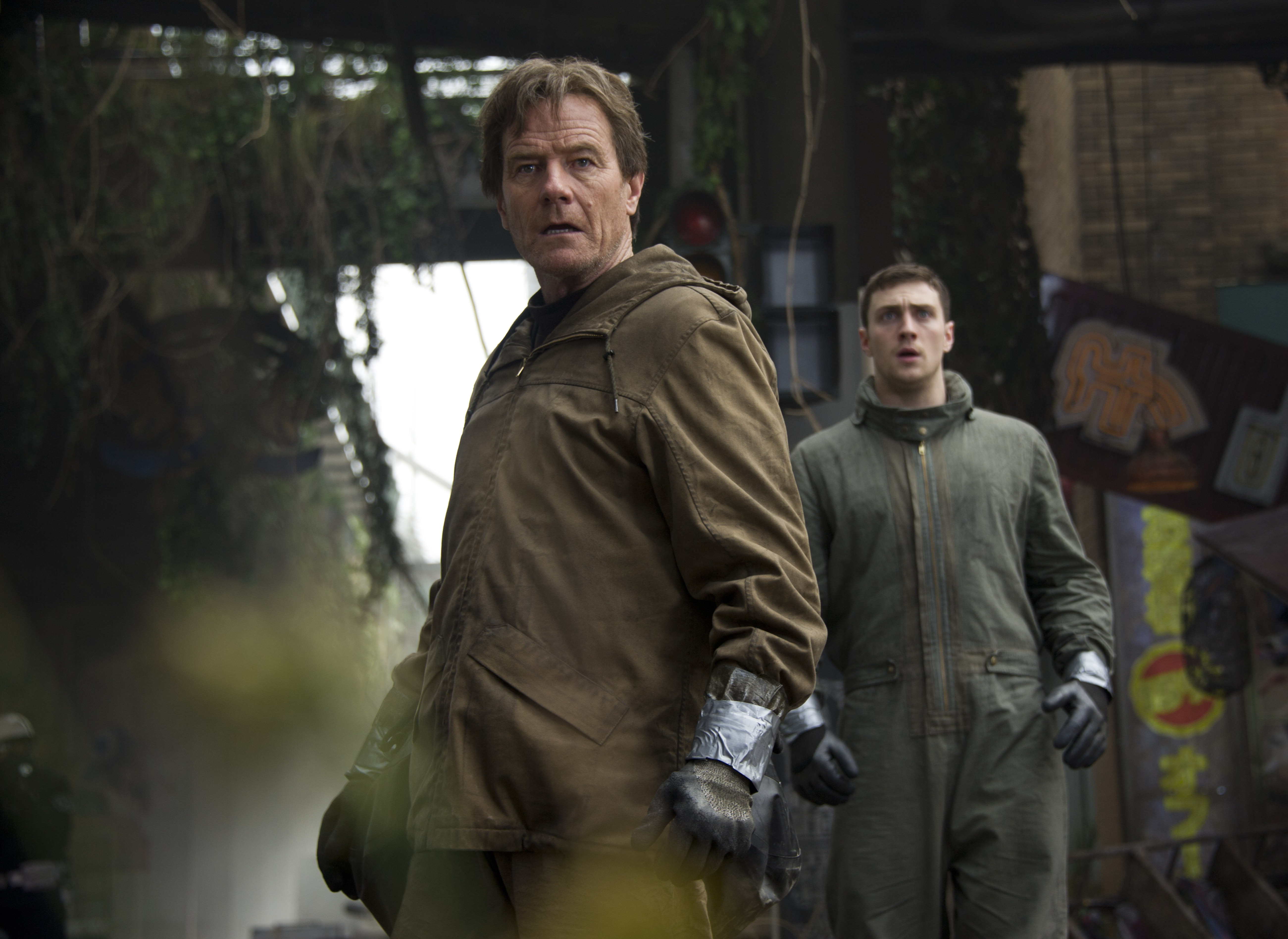 During the first hour of the film, all the plot (and all the action) is experienced from a human POV. Aside from the opening scene in the Philippines, viewers are privy only to what Joe and Ford Brody (Bryan Cranston and Aaron-Taylor Johnson) suspect, discover, and experience for themselves. Mythology, distant incidents, and even their own images are presented, respectively, through archival footage, news reports, and surveillance feeds. As the film progresses, however, the perspective through which this story unfolds undergoes a slow tectonic shift toward the omniscient.

The original Godzilla was born from the Lucky Dragon 5 incident—a 1954 disaster that saw a fishing boat wandering into a nuclear test, poisoning the crew—and it reflects Japan's post-war concern with nuclear warfare. But Ishirô Honda's 1954 film is, at its essence, concerned with the monster's transition from folkloric threat to apocalyptic reality. Edwards (and screenwriter Max Borenstein) learned a number of valuable lessons from that film, paying careful attention to how Honda skillfully uses a small domestic drama to springboard his screed and align the audience's perspective with that of an entire country, and how—once the monster is introduced—his film stops dead in its tracks whenever it pauses to advance the woefully undercooked love plot that's used to anchor the human story.

What Edwards presumably saw in Honda's enduring masterpiece is that it's counterintuitive to anchor a cautionary tale about human humility with a narrative that balances a single person's conflicts with the fate of our planet. The creative team of this new Godzilla understood that scale is more than another word for height, and that the cinema's most palpably enormous digital creature wouldn't be enough in and of itself to fully express the relative smallness of the film's characters.

Edwards' Godzilla is the result of a creative team attempting to reconcile the essence of Honda's original with the narrative demands of a blockbuster. This film may not need viewers to care about its characters, but it still needs to have some. It's a tall order, but in returning to the transitional trajectory of the movie that started it all, this new Godzilla finds an extremely elegant solution. Brody's attempts to reunite with his wife and child are little more than scaffolding for a story that is explicitly about the transition from anthropocentrism to ecocentrism. It's a theme that Edwards' film promotes to a plot, the movie gradually reorienting this presumptuously human story until we're reduced to mere observers, trying desperately to save ourselves as monsters battle above us, oblivious to our plight.

In Godzilla, almost all human action is futile and/or fatal, and the small victories belong almost exclusively to supporting characters (a young boy reuniting with his parents, a scientist finally getting a good look at the majesty of the monster she's studied all her life). Godzilla is both humanity's reckoning and its salvation, a response to our unchecked parasitic relationship with the planet and a reminder of our ultimately supporting role as stewards rather than beneficiaries. Steven Spielberg exerts an undeniable influence on the way the film moves, but Hayao Miyazaki's work best anticipates where it goes. If Jurassic Park is about the perils of playing God, Godzilla responds that just being ourselves is bad enough.

In fact, here's the sum total of what humans accomplish in the film: As a result of our lust for uranium, we reintroduce giant insectoid monsters back into the population, and as a result of our myopic thirst for nuclear energy, we then provide those creatures with all the radioactivity they need to grow stronger and reproduce. These failures are so extraordinary that our only successes are in our efforts to mitigate them, as Brody sets fire to the next generation of MUTOs, and obliterates the ecosystem by detonating a powerful bomb off the coast of San Francisco. (After all its intended targets have already been neutralized. Whoops.) If humans do anything positive in the film, it's lowering the rent prices on Telegraph Hill. Godzilla isn't an action movie, it's a spectacle of humility. 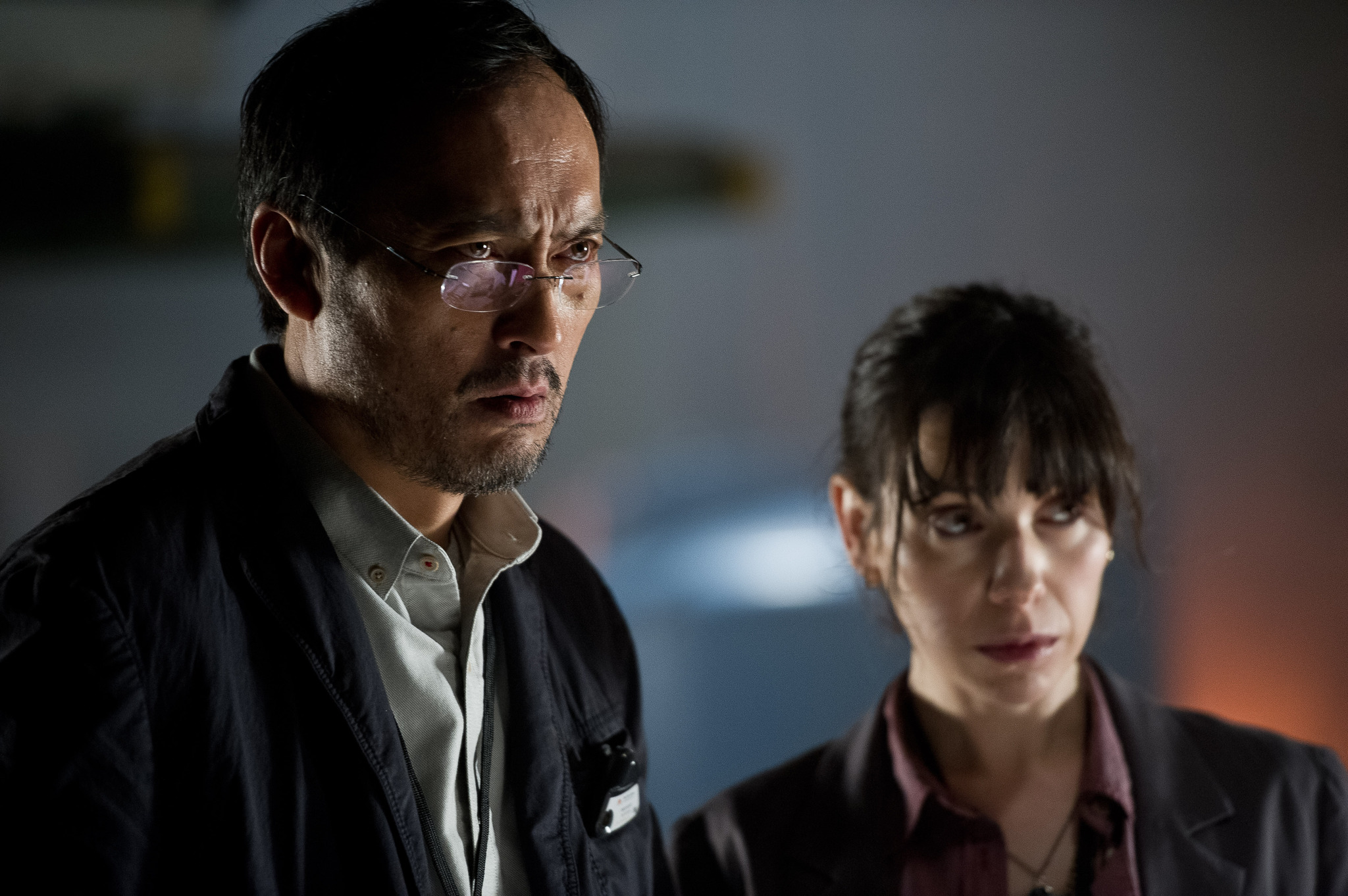 Unsurprisingly, one of the most common criticisms the film has engendered is that the people in it are bland and don't do anything. Devin Faraci put it best in his otherwise-positive review, observing that "Nobody's going to walk out of Godzilla wanting to buy toys of the human characters." He's wrong, of course, because the world desperately needs a Juliette Binoche action figure, and Hasbro is still slacking on the Dan In Real Life merchandise, but his point is well-taken.

In fact, one major sequence even begins with Brody fiddling with an action figure that resembles himself, and a little boy's interest in the toy lands him squarely in the middle of a MUTO attack that the military is powerless to stop. It's a cute story beat, but also one that bluntly reinforces our insignificance in the face of the film's crisis—ultimately, the only thing the humans do well in Godzilla is provide scale for the monsters. The people only there for us to see how insignificant they are.

Judging from reviews and social media, many viewers feel betrayed by the film's dwindling interest in the family that dominates its first half, as the Brody clan's multi-generational tragedy is a distant memory by the time we get to the climactic kaiju battle. The eponymous radioactive monster, who has all the emotional complexity of a natural disaster, easily emerges as the most nuanced character in the film, and also—despite his prolonged absences from the picture—its one true lead.

This is the rare live-action summer blockbuster in which, by design, not a single one of the human characters in the movie has anything resembling a complete emotional arc. And while it's difficult to argue that Brody wouldn't have benefited from some memorable dialogue and a more charismatic performance, the lack of a compelling homosapien protagonist helps clarify the film's true trajectory. This is a story about exposing the myopia of the human perspective and then humiliating our inherently egocentric POV.  We're just another part of the equation Godzilla has come back to balance, an urgent reorientation that Edwards turns into a story by gradually disempowering his human characters, conflating us with the bad guys until Godzilla can emerge as an aspirational figure.

From the beginning, the Brody family is matched with the MUTOs. A cut from the busted Philippine mine to the Janjira power plant where Brody's parents work establishes a link between the film's two parasitic forces. Both feed on the earth's nuclear energy at the expense of the planet's fundamental health, and both are blindly concerned with cultivating future generations of their species.

Godzilla is obsessed with the value of reproductive family units. The dynamic of parents concerned with the well-being of their child recur throughout the film like a chorus. The first triangle is between Brody and his parents. (His mother's dying words are for Joe to take care of their son.) Next are the angry Japanese parents collecting their goth teen from a Tokyo police station, and the little girl on the beach in Honolulu, whose parents whisk her to safety when Godzilla arrives. There's the young Japanese boy whose brief arc is entirely defined by his separation from, and return to, his worried parents. Finally, there's Brody's wife and son, whose struggle for survival is rhymed with that of the MUTOs and their spawn during the siege on San Francisco. The MUTOs are bound by a destructive lust, their goal being simply to reunite and have uninterrupted sex, a desire to which Brody and his wife can certainly relate. By the time the female MUTO pulverizes downtown Las Vegas, the giant insect monster has done more to earn our affection than anyone else in the film.

The one thing Brody manages to accomplish in the movie is aborting the next generation of MUTOs, setting fire to the larvae that have been strung from our nuclear bomb like pearls. By encouraging us to root for the MUTOs, who are more charismatic than the human cast, Edwards twists the ostensible triumph of Brody's genocide into something of a teachable moment: Viewers have been distanced from the human characters, so their actions stoke critical thought where most movies of this sort are only eager to satisfy bloodlust.

The 1954 Godzilla ends with a scientist killing the titular beast, but by the closing credits of Edwards' edition, Godzilla hardly even knows we exist. The King of Monsters was born into global culture as a reckoning, but in the ongoing aftermath of the Fukushima disaster, the worst fears of Honda's film have been confirmed, and Godzilla is less of a mythological threat than he is a daily part of our ecosystem. We've become a far more destructive species over the course of the last 60 years, but Godzilla's invincibility in the face of our growing power confirms that our stewardship is a temporary charge, and not a birthright. If Honda's film was a desperate plea for reason, Edwards' is a plea for perspective. We used to be the villains in this story, but now we're just in the way.

It's exceptionally brave for a studio tentpole to so fearlessly and damningly embrace that perspective. Some audiences may refuse to see the forest for the trees, but Edwards understands that it helps to be 300 feet tall. It's telling that the film climaxes by finally aligning the human POV with that of the titular monster; Edwards' most instructive cut creates a parallel action between Brody and Godzilla, as both combatants keel over after the final battle. It may have cost us several major cities and an untold number of lives, but humans are finally seeing eye to eye with nature's wrath. The film's evocative closing shot serves as a resonant reminder that just because we're the planet's predominant storytellers doesn't mean that the story is necessarily about us.