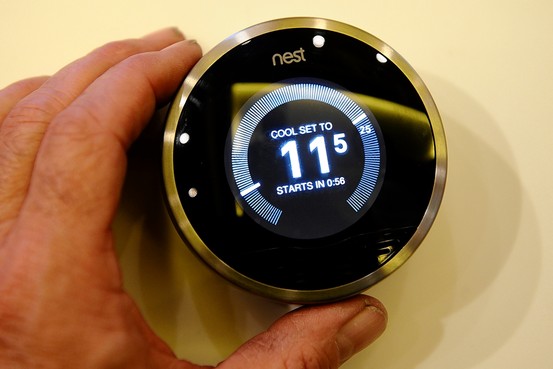 Advertising may be coming to your thermostat and lots of other strange places, courtesy of Google.

In a December letter to the Securities and Exchange Commission, which was disclosed Tuesday, the search giant said that it could be serving ads and other content on "refrigerators, car dashboards, thermostats, glasses, and watches, to name just a few possibilities."

Google made the statement to help justify why it shouldn't disclose revenue generated from mobile devices, a figure the SEC had requested and that companies like Facebook and Twitter both disclose. Google argued that it doesn't make sense to break out mobile revenue since the definition of mobile will "continue to evolve" as more "smart" devices roll out.

"Our expectation is that users will be using our services and viewing our ads on an increasingly wide diversity of devices in the future," the company said in the filing.

Google's Android operating system has already conquered the smartphone world, capturing nearly 80% share of shipments in 2013 according to Strategy Analytics. And true to its December statement, Google is indeed trying to conquer other device categories with its mobile software.

In January, it formed an alliance with Audi, General Motors, Honda and Hyundai among others to get Android in cars. In March it announced a new version of its operating system that is coming to wearable devices like smartwatches.

Its Internet-connected eyewear Google Glass just went on sale to anyone in the U.S.–for as long as supplies last.

In perhaps its most high-profile move in the home, Google announced a $3.2 billion deal in January to buy Nest Labs, a startup known for smart thermostats and smoke detectors–a few weeks after it told the SEC to expect ads and other content on such devices.

Nest tried to assuage fears that customer data would be shared with Google, possibly for the purposes of targeted ads, writing in a company blog when the deal was announced that its privacy policy "limits the use of customer information to providing and improving Nest's products and services."

Yet Google's statement that it expects users to view ads on a "wide diversity of devices" suggests they should indeed keep in mind the possibility that ads pop up when they set their living room temperature.

Get the latest breaking news and reviews from our personal-tech team delivered to your inbox.