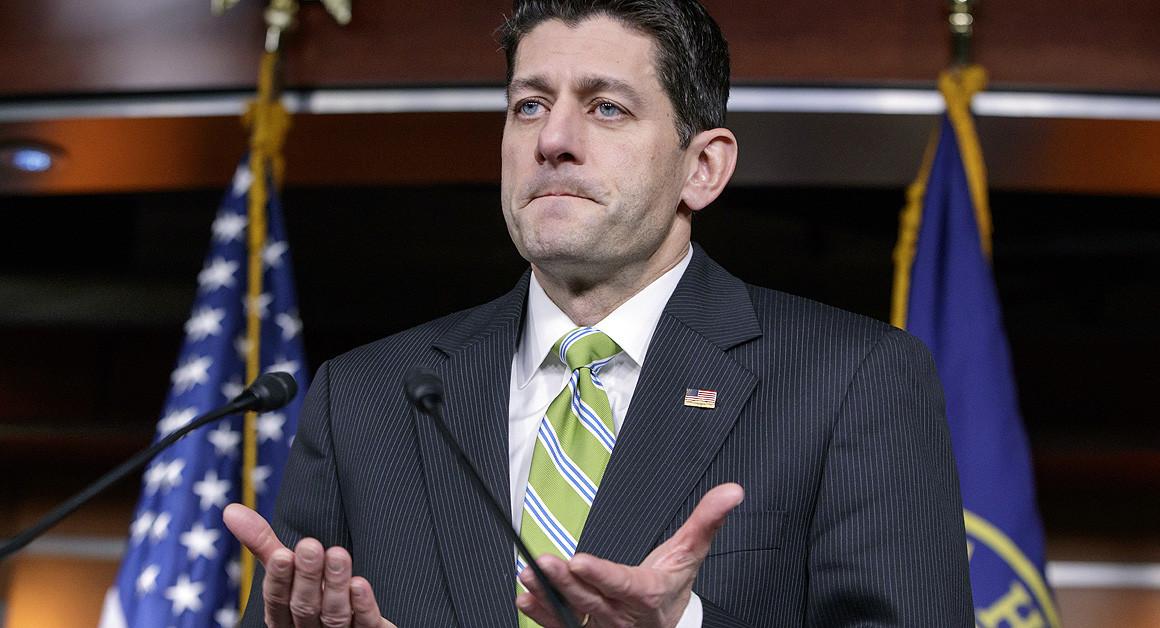 House Republicans were out in force Tuesday insisting they're not giving up their push to repeal and replace Obamacare. Privately, though, they're nowhere near a consensus on how to move forward.

After Friday's fiasco — when Speaker Paul Ryan pulled the House GOP health care plan because he didn't have the votes — Republicans on Tuesday vowed to come up with a Plan B. Ryan (R-Wis.) told reporters some lawmakers who opposed the bill wanted to continue talks to get to yes.

"We're going to keep talking to each other until we get it right," he said during a news conference.

But lawmakers and aides acknowledge the odds are not in their favor. The conference is still deeply divided, and members are seething over the demise of their replacement bill — with most fingers pointing at the arch-conservative Freedom Caucus.

During a meeting with several dozen whips Monday night, Republican allies of leadership vented about how they want to punish members of the conservative group who "don't play with the team." Some lawmakers spoke of "primary-ing" conservatives; others brought up stripping subcommittee gavels from those who opposed the bill. Across the hall at the same time, the House GOP's freshman class discussed banning from its meetings and events any first-termers who opposed the Republican health care plan.

"There should be consequences for their actions," said one GOP whip leaving the room Monday night. "Is this group ever going to get to yes?"

House leaders, however, believe retaliating would only undercut any attempt later to revive the health care push. Ryan urged his members during a closed-door meeting Tuesday morning not to take out their anger on the Freedom Caucus but instead to refocus their energy on finding an alternative that can pass.

The efforts by Republican leaders to reopen health care negotiations came after Trump gave House Republicans an alternative last week: Pass the bill Friday, or live with Obamacare. But after a brutal weekend of press coverage — of all things, how could the Republican Party blow the one issue they've been campaigning on for seven years? — Republicans came back this week saying they're not ready to give up yet.

White House spokesman Sean Spicer told reporters Tuesday that talks with lawmakers are in the formative stages. "Have we had some discussions and listened to ideas? Yes. Are we actively planning an immediate strategy? Not at this time," he said.

Trump's chief strategist Steve Bannon has also been in touch with moderates and conservatives to see if he can help facilitate an agreement.

It's unclear where they'll go from here, though. Multiple senior Republican sources and lawmakers it's unlikely Ryan would put the same bill on the floor. Ways and Means Chairman Kevin Brady concurred with that sentiment, telling POLITICO "we're moving on" from the current draft.

The Texas Republican, who helped write the tax portion of the repeal and replacement plan, suggested the Senate take up the health care torch now: "There are two chambers in Congress. Senators have had plenty of ideas on what the House should do on health care. Now it's their turn to mark up the budget reconciliation instructions and send it. … They have the ability to do that right now."

Others, however, disputed that notion, saying the House would have to pass a "shell" reconciliation bill, allowing the Senate to fill it in with their own policy. House Republicans probably wouldn't do that because it would mean giving up their own leverage in crafting an Obamacare replacement.

Senate Majority Leader Mitch McConnell signaled Tuesday he has no desire to revive a legislative attack on the health law. "Where we are on Obamacare, regretfully at the moment, is where the Democrats wanted us to be," he told reporters.

Meanwhile, Freedom Caucus members who were previously hard "no's" on the Republican bill said Tuesday that they believed they can still strike a deal with moderates. Rep. Louie Gohmert (R-Texas), who opposed the GOP alternative, said he is confident the Freedom Caucus "can work out a deal" that's "more than 17 percent popular." Rep. Dave Brat (R-Va.) said "we're within striking range of agreement" and advised to "wait a few days."

Chairman Mark Meadows (R-N.C.) says he's been in talks with members of the moderate Tuesday Group, including Rep. Tom MacArthur (R-N.J.), to come up with a plan.

"Everybody wants to find a way to get this passed, and we're gonna work real hard to do that," Meadows said.

One Republican aide dismissed such discussion as deflection on the part of the Freedom Caucus. Though the group has been cited as a main culprit for the collapse of the Republican health care play, Freedom Caucus spokeswoman Alyssa Farah has noted that just as many moderate members were against the bill as conservatives were.

Trump has blasted the group numerous times on Twitter the past few days, claiming that the group "snatched defeat from the jaws of victory."

"They're feeling the heat. The president is tweeting at them everyday," said a Republican source.

Ryan, for his part, would not blame the group publicly.

Tara Palmeri contributed to this report.