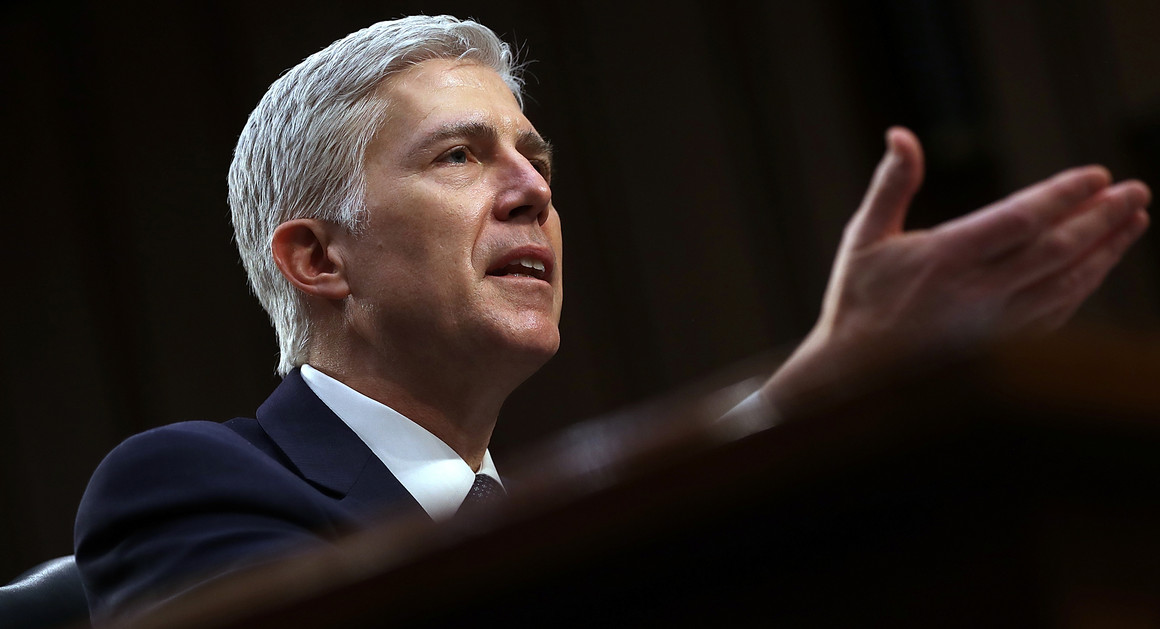 Supreme Court nominee Neil Gorsuch copied the structure and language used by several authors and failed to cite source material in his book and an academic article, according to documents provided to POLITICO.

The documents show that several passages from the tenth chapter of his 2006 book, "The Future of Assisted Suicide and Euthanasia," read nearly verbatim to a 1984 article in the Indiana Law Journal. In several other instances in that book and an academic article published in 2000, Gorsuch borrowed from the ideas, quotes and structures of scholarly and legal works without citing them.

The findings come as Republicans are on the brink of changing Senate rules to confirm Gorsuch over the vehement objections of Democrats. The documents could raise questions about the rigor of Gorsuch's scholarship, which Republicans have portrayed during the confirmation process as unimpeachable.

The White House on Tuesday pushed back against any suggestion of impropriety.

"This false attack has been strongly refuted by highly-regarded academic experts, including those who reviewed, professionally examined, and edited Judge Gorsuch's scholarly writings, and even the author of the main piece cited in the false attack," said White House spokesman Steven Cheung. "There is only one explanation for this baseless, last-second smear of Judge Gorsuch: those desperate to justify the unprecedented filibuster of a well-qualified and mainstream nominee to the Supreme Court."

However, six experts on academic integrity contacted independently by POLITICO differed in their assessment of what Gorsuch did, ranging from calling it a clear impropriety to mere sloppiness.

"Each of the individual incidents constitutes a violation of academic ethics. I've never seen a college plagiarism code that this would not be in violation of," said Rebecca Moore Howard, a Syracuse University professor who has written extensively on the issue.

Elizabeth Berenguer, an associate professor of law at Campbell Law School, said that under legal or academic standards Gorsuch's similarities to the Indiana Law Journal would be investigated "as a potential violation of our plagiarism policy. It's similar enough to the original work."

"I would apply an academic writing standard," said Berenguer, who teaches plagiarism and legal writing. "Even if it were a legal opinion, it would be plagiarism under either."

The White House provided statements from more than a half-dozen scholars who have worked with Gorsuch or helped oversee the dissertation he wrote at Oxford University that was later turned into his book. They included John Finnis, professor emeritus at Oxford; John Keown of Georgetown University, one of the outside supervisors for Gorsuch's dissertation; and Robert George of Princeton University, the general editor for Gorsuch's book publisher.

The experts offered by the White House asserted that the criteria for citing work in dissertations on legal philosophy is different than for other types of academia or journalism: While Gorsuch may have borrowed language or facts from others without attribution, they said, he did not misappropriate ideas or arguments.

"Judge Gorsuch did not attempt to steal other people's intellectual property or pass off ideas or arguments taken from other writers as his own," said George. "In no case did he seek credit for insights or analysis that had been purloined. In short, not only is there no fire, there isn't even any smoke."

The examples at issue make up a small fraction of published works by Gorsuch, which include hundreds of legal opinions, academic articles, news articles and his book. POLITICO did not conduct a full examination of the federal judge's writings.

Yet a review of the documents provided to POLITICO shows Gorsuch parroting other writers' prose and sourcing without citing them. Instead, Gorsuch often acknowledges the primary sources cited by those writers.

In the most striking example, Gorsuch, in his book, appears to duplicate sentences from an Indiana Law Journal article written by Abigail Lawlis Kuzma without attributing her. Instead, he uses the same sources that Kuzma used: A 1982 Indiana court ruling that was later sealed, a well-known pediatrics textbook, "Rudolph's Pediatrics," and a 1983 article in the Bloomington Sunday Herald.

At one point, Gorsuch's prose mimics Kuzma's almost word for word in describing a child born with Down syndrome.

Kuzma stated that "Esophageal atresia with tracheoesophageal fistula indicates that the esophageal passage from the mouth to the stomach ends in a pouch, with an abnormal connection between the trachea and the esophagus."

Gorsuch wrote that "Esophageal atresia with tracheoesophageal fistula means that the esophageal passage from the mouth to the stomach ends in a pouch, with an abnormal connection between the trachea and the esophagus."

"Shortly after Baby Doe was born, a hearing was held at Bloomington Hospital to determine whether the parents had the right to refuse the surgery on behalf of their child. An attorney was present at the hearing to represent the parents, though no one was present to represent Baby Doe's potentially adverse interests. Six physicians attended, three of whom had obstetric privileges and three of whom had pediatric privileges at Bloomington Hospital," Gorsuch wrote.

Wrote Kuzma: "Approximately twenty-six hours after Infant Doe was born, a hearing was held at Bloomington Hospital to determine whether the parents had the right to choose a course of treatment for their child that consisted of allowing the child to die. An attorney was present at the hearing to represent the child's parents. No attorney was present to represent Infant Doe's interests. Six physicians attended the hearing, three of whom had obstetric privileges and three of whom had pediatric privileges at Bloomington Hospital."

Kuzma, a one-time aide to former Sen. Dick Lugar (R-Ind.), did not respond to an inquiry from POLITICO, but released a statement through Gorsuch's team. Kuzma said she does "not see an issue here, even though the language is similar."

"These passages are factual, not analytical in nature," Kuzma, now a deputy attorney general in Indiana, said. "It would have been awkward and difficult for Judge Gorsuch to have used different language."

But a 1983 Notre Dame Law Review article addressing the same case did, in fact, use different, plainer language to describe the issue than Kuzma or Gorsuch did. Author John M. Maciejczyk wrote that the "infant needed surgery to correct a blocked esophagus."

In several other examples provided to POLITICO, Gorsuch follows the fact patterns and sourcing of other writers without acknowledging them.

"In 1989 Humphry left his second wife, Ann Wickett, soon after she had undergone surgery for breast cancer. During the divorce, Wicket alleged that when Humphry purported to help her mother commit suicide, the resulting death was not fully consensual," Gorsuch wrote.

Dowbiggin wrote: "In 1989 he left his second wife, Ann Wickett, shortly after she had undergone surgery for breast cancer. Their subsequent divorce was made messier by Wickett's allegations that her mother had not died willingly when Humphry had participated in the suicides of her own parent," Dowbiggin wrote.

Gorsuch did not include an attribution to Dowbiggin in the passage at issue, though he did cite the author at numerous other points in the book. Dowbiggin listed his sources as "Deadly Compassion: The Death of Ann Humphry and The Truth About Euthenasia," by Rita Marker, and "Last Rights: The Struggle over the Right to Die" by Sue Woodman. The same titles were cited as sources by Gorsuch.

In the same chapter, Gorsuch appears to rely heavily on a 2002 article by Paul Lombardo of the University of Virginia about sterilization techniques used in that state in the early 20th century. Lombardo writes that a woman named Carrie Buck was sterilized after having a child and her mother was institutionalized.

"Even worse for her, officials at her mother's asylum claimed that mother and daughter shared hereditary traits of feeblemindedness and sexual promiscuity," Gorsuch wrote.

Wrote Lombardo, "Officials at the Virginia Colony said that Carrie and her mother shared the hereditary traits of 'feeblemindedness' and sexual promiscuity."

Gorsuch did not cite Lombardo despite mimicking his sentences and presenting them in virtually the same order, according to an electronic search of Gorsuch's book.

Howard, the Syracuse University professor, said Gorsuch engaged in a practice known as "patchwriting" — essentially patching together words, fact sequences and quotes from another source, but occasionally changing up phrasing and tenses.

In addition to "heavy patchwriting," Howard said, Gorsuch "hides his sources, which gives the appearance of a very deliberate method. I would certainly call it plagiarism."

In a 2000 article in the Harvard Journal of Law & Public Policy titled "The Right to Assisted Suicide and Euthanasia," Gorsuch's writing aligns closely with a 1985 Duquesne Law Review article about euthanasia in colonial America. Gorsuch describes laws in colonial Virginia, Massachusetts, Rhode Island, South Carolina, North Carolina and Pennsylvania in the same order and with similar quotations as the Duquesne article. But Gorsuch never cites the article in that passage, instead only repeating the same sources that it relied on.

Oxford's academic guidance for plagiarism states that "paraphrasing the work of others by altering a few words and changing their order, or by closely following the structure of their argument, is plagiarism if you do not give due acknowledgement to the author whose work you are using."

Christopher Sprigman, a New York University law professor involved in building an online standard for citation in legal scholarship, said he did not believe the examples of Gorsuch's questionable writings reflected "mendacious" acts on the judge's part.

Gorsuch's manner in attributing sources is "a choice that you might agree with or disagree with," Sprigman said. "It's a little bit risky, but I wouldn't say it rises to the level of a bad act. I think some people would say it's sloppy."

Josh Gerstein and Seung Min Kim contributed to this report.