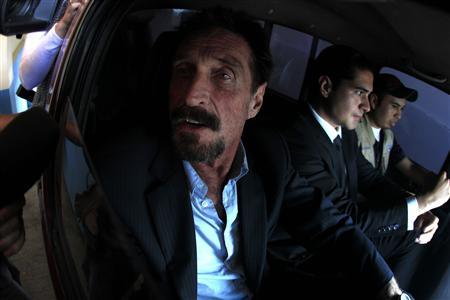 (Reuters) – John McAfee's odyssey on the run opened a new chapter after Guatemala deported to the United States the former Silicon Valley millionaire wanted for questioning in Belize over the murder of a fellow American.

McAfee, 67, had been held for a week in Guatemala, where he surfaced after evading officials in Belize for nearly a month following the killing of American Gregory Faull, his neighbor on the Caribbean island of Ambergris Caye.

McAfee has led the world's media on a game of online hide-and-seek in Belize and Guatemala since he fled after Faull's death, peppering the Internet with pithy quotes and colorful revelations about his unpredictable life.

"I'm happy to be going home," McAfee told reporters dressed in a black suit shortly before his departure from Guatemala City airport on Wednesday afternoon. "I've been running through jungles and rivers and oceans and I think I need to rest for a while. And I've been in jail for seven days."

Police in Belize want to quiz McAfee as a "person of interest" in Faull's death, though the tech guru's lawyers managed to block an attempt by Guatemala to send him back there.

Guatemala's immigration authorities had been holding McAfee since he was arrested last Wednesday for illegally entering the country with his 20-year-old Belizean girlfriend.

The eccentric tech pioneer, who made his fortune from the anti-virus software bearing his name, has been chronicling life on the run in a blog, www.whoismcafee.com.